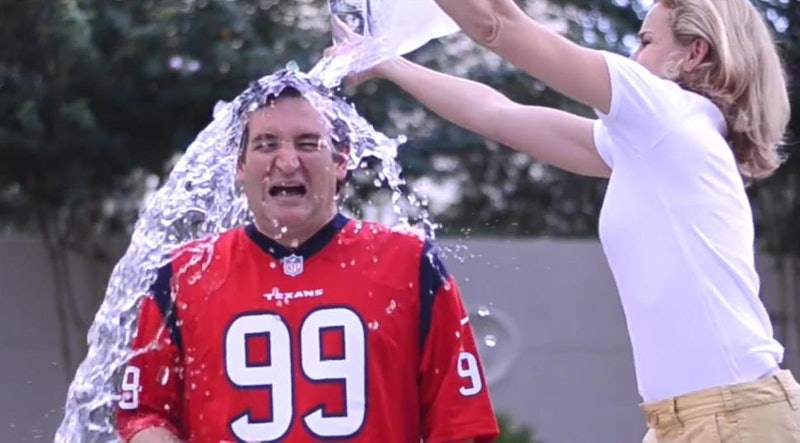 If you have a Facebook account, chances are you've seen this little thing called the ALS Ice Bucket Challenge — or have been nominated to take it. But before you dump that ice water over your head, the Catholic Church wants you to think twice about the cause. Members of the Catholic community are boycotting the ALS Ice Bucket Challenge — not because they believe Jesus wouldn't waste water, but because the foundation receiving the donations allegedly conducts embryonic stem cell research, which is a huge violation of the Church's sanctity of life doctrine.

So, if you're a Catholic who took the challenge and donated money — sorry, Melinda Gates — you may need to say a Hail Mary or two.

It's unclear when or how this Catholic boycott began, but it may have something to do with the Patheos blog post from Father Michael F. Duffy, a Catholic priest who serves the Diocese of Rockville Center in New York. In his Aug. 14 post titled, "The Moral Problem with the ALS Ice Bucket Challenge," Duffy called on Catholics to boycott the ALS challenge, which funds the ALS Association, and instead contribute to a more moral charity.

The problem that I have the with ALS Ice Bucket challenge is that the ALS Association is a supporter of embryonic stem cell research. ... While I can’t donate to the ALS Association, I will certainly pray for those that suffer from this disease. I’ll also be on the lookout for a charity that doesn’t violate the Sanctity of Human Life.

However, Carrie Munk, a representative for the ALSA sent the American Life League an email in July, clarifying that it primarily funds adult stem cell research.

Munk added in her email:

This [embryonic stem-cell] research is funded by one specific donor, who is committed to this area of research. In fact, donors may stipulate that their funds not be invested in this study or any stem cell project. Under very strict guidelines, The Association may fund embryonic stem cell research in the future.

Still, that's not enough for the Catholic Church. Duffy's Patheo post has garnered more than 100,000 Facebook shares, and it seems to have made its way up the hierarchy. Earlier this week, the Archdiocese of Cincinnati ordered Catholic schools to stop donating to the ALS Association because of their position on embryonic stem cell research. An email was reportedly sent to each school in the archdiocese.

A spokesman for the archdiocese said in a statement that there was nothing morally objectionable to dumping ice water on your head. The end goal, however, is an entirely different story:

We certainly appreciate the compassion that has caused people all over the country, certainly including many Catholics, to be interacting and engaging in a fun way to support ALS research. But it's a well-established moral principle that not only the ends be good, but the means must be good, too.

The archdiocese is urging its members to donate to the John Paul II Medical Research Institute in Iowa, which supports "research that is pro-life driven," according to the institute's website.

The Catholic Church believes life begins at fertilization, and so embryonic stem cell research is seen as the destruction of a life. The U.S. Conference of Catholic Bishops took a strong oppositional stance on the practice in 2008, calling it "gravely immoral." However, the USCCB has yet to release a statement on the ALS Ice Bucket Challenge and the ALSA's current research.

So maybe Pope Francis will take up Shakira's ice bucket challenge after all.

More like this
The Families Of Grenfell Tower Are Still Waiting For Justice, Five Years On
By Bustle UK
How To Support Gun Control Reform Right Now
By Morgan Brinlee and Carolyn Steber
5 Concrete Ways To Take Action Against The Rwanda Deportation Plan
By Rachel Mantock
Plan C Vs. Plan B: What's The Difference?
By Lexi Inks
Get Even More From Bustle — Sign Up For The Newsletter