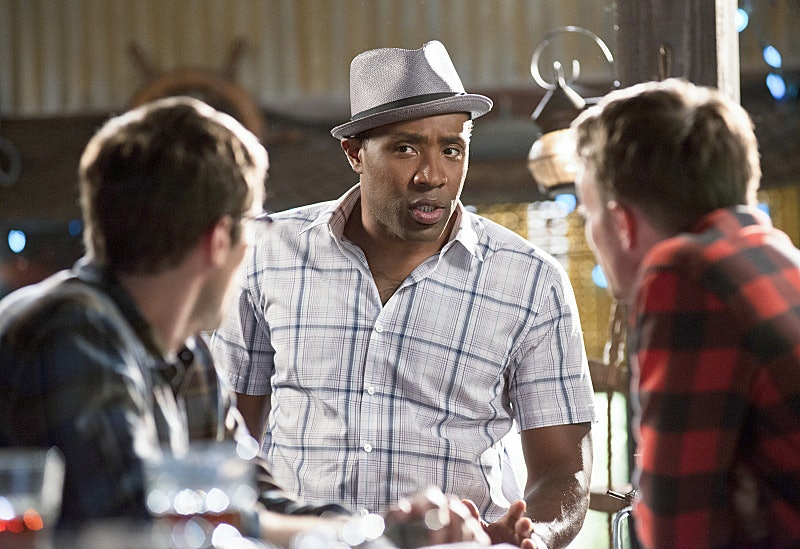 I wish I could say, "Poor Lavon," but I really just can't bring myself to do it. For the past three seasons of The CW's Hart of Dixie former-football-player-turned-mayor Lavon Hayes has been an emotional mess. And if Bluebell were any other town, he honestly wouldn't be mayor anymore either — I know, I'm being hard on him, but it's kind of the truth. Lavon's a great guy, he's just immature and has no idea what to do with his emotions. So, when he ran to tell Lemon she was his "true love" during the Season 3 finale, I cringed. Lemon's not his true love, frankly, he might not even know who his true love is yet. But, if recent Hart of Dixie Season 4 spoilers are revealing that George and Tansy might get back together, there's definitely still hope for Lavon Hayes to get his romantic life in order.

Every Dixie fan thought when Annabeth told Davis that she was in love with someone else and she couldn't marry him that, in turn, Lavon would be inspired by Don Todd to run to her and profess his love. Because, really, it's so obvious that they're an endgame 'ship. Giving us the run-around in the Season 3 finale didn't convince anyone that Lavon and Lemon would end up happily ever after. It just wouldn't work, regardless of whatever immature thought process led Lavon to that cruise ship terminal.

And here's why we should all be convinced that Lavon might find real love in Season 4. First, Tansy is back in town and we all know that George went running to Lemon because Tansy rejected his proposal that they get back together. With the dog-loving, former Mrs. Kinsella back in town, it's obvious that even if this isn't Dixie's final season, George is going to get the second chance he desperately wanted with her. So, what does that say about Lavon? Well, he's kind of in a similar boat — Lavon wasn't ready to commit when Annabeth gave him that relationship ultimatum early in Season 3. And he was really regretting it when he found out that she'd started dating Davis. Which, again, is incredibly immature of him to only realize that Annabeth is the greatest thing to ever happen to him after she's tried to move on and find happiness with someone else. But, bear with me here.

If George is going to realize that his "true love" for Lemon was only fueled by Tansy's rejection and by the fact that he saw a similarity in his past with Lemon and Don Todd's relationship with his wife, Lavon will too. Even if Lavon doesn't come to that conclusion on his own, George will help him realize that going back to Lemon isn't the relationship he really wants. And if that doesn't work, Lemon herself will zap him back to the reality that she's evolved so far beyond her past and the infantile men in Bluebell that she's absolutely not interested and she knows that he's relying on a memory of what they had in the past, not a prospective future.

I'm not saying that Lavon should get back together with Annabeth right away — that'd just be inappropriate, considering his Don Todd inspiration prompted him to run to Lemon and not his former girlfriend. However, I believe that, somewhere during the 10 episodes that will make up Hart of Dixie Season 4, Lavon will learn that just because Lemon was his first love, that doesn't mean she's his true love. Even if Lemon has to knock that sense into him herself — their love story was flawed, mostly by the fact that it was an affair — and, if Lavon still can't figure it out himself, as a changed woman, she'll be able to make him realize that Annabeth is the right one for him.