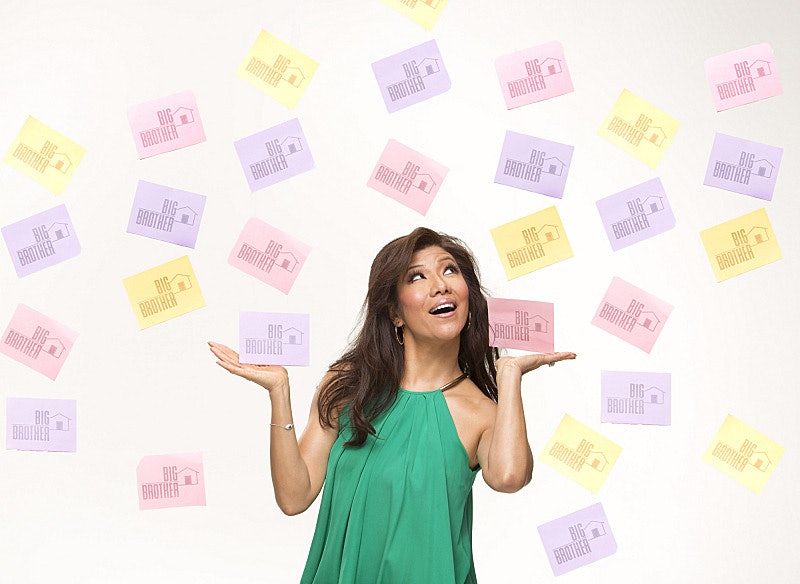 Unless you have been staying off the Internet and basically cutting off all forms of communication for the past couple of weeks, for that matter, you've probably seen a bagillion posts from your friends and favorite celebrities doing the ALS Ice Bucket Challenge. The Internet sensation that aims to raise awareness and money for ALS research has come to Big Brother, of all places. Thursday night's live eviction episode of Big Brother ended with host Julie Chen taking part in the Ice Bucket Challenge. CBS showed the video of the network's president and CEO, and Julie's husband, Les Moonves taking on the challenge. Moonves nominated Mark Harmon, the entire cast of NCIS, and his "beautiful wife" to complete the challenge. However, he stipulated that Julie had to complete the challenge live during the Big Brother telecast.

And she did, with her hair, makeup, and radiant red dress on, no less. Julie got into one of those inflatable kiddie pools, and none other than Will Arnett, who is the star of the CBS sitcom The Millers, appeared from backstage to do the honors. Arnett dumped the bucket over Julie's head, to which she responded, "How's my hair?" while shivering in discomfort, as everybody in these videos does.

So who did Julie nominate to do the challenge next? Every houseguest in Big Brother history. Wow. In case you were wondering, that's 192 people in all, not counting the houseguests currently on the show, who may or may not be notified about this challenge that has been sweeping the nation. That's a lot of ice.

I bet this is something Julie has wanted to do for a long time. I'm sure she's thrilled to be a part of such a great cause and that she has now inspired almost 200 other people to participate as well. But possibly even more than that, it's payback time for Julie. Do you know how many dumb statements, fits, and racist remarks Julie has had to sit through with these people on the front lines? We can enjoy it in the comfort of our own homes, but she actually has to interact with them. Seeing past houseguests douse themselves in icy cold water has got to feel good.