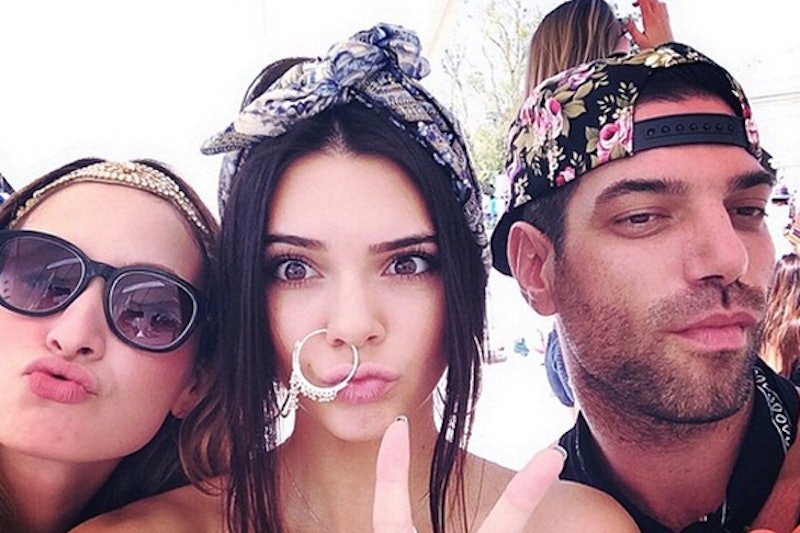 Celebrity body piercings are nothing new. We've had Britney Spears' bellybutton ring, Christina Aguilera's labret, Fergie's eyebrow piercing, Kesha's nose ring, Scarlett Johansson's septum ring, Rihanna's nipple piercings... the list goes on and on. But now it appears that nose piercings are the big, hip thing to do. Rihanna recently had a septum piercing (fake), while Katy Perry pierced her nose (for real) this past weekend. Now, Lady Gaga's septum ring has resurfaced as part of her current dramatic image, which is anchored by inky hair and brows bolder than Cara Delevingne's. And remember when Kendall Jenner also rocked that weird earring/nose piercing hippie hybrid thing at Coachella?

Real or fake, nostril or septum — dramatic nose piercings are definitely having a moment.

I feel like giving just a little bit of the credit Jessica Biel for pre-starting the trend a year ago, when she took the punk rock theme of the 2013 Met Gala literally, sporting a tiny gold septum ring as part of her fancy look. It was a totally unexpected move for Biel, who doesn't usually go overly unconventional and punk with her style. It actually ended up looking elegant of all things.

It's sort of cute, isn't it? Dare I say it's classic? It was subtle and sublime, and not something she has done again. Sadly.

The current nose adornment "movement" has been percolating and became really prevalent in the warm weather months of 2014. But the latest batch of nose piercings are not like Biel's simple septum statement. They are overly bold and scream, "LOOK AT ME!!!!"

Miss Jenner, right before she became an It Girl in the modeling world, wore this huge, ostentatious and out-of-character hoop that could have been a regular earring. It was clearly temporary. It was fun for a day at a music festival, but not quite practical to add to your regular office look.

Perry shared an IG video of her nose mid-piercing. It was graphic, sure, but Perry was sharing the moment with the KatyCats. Nose piercings were big back in the early aughts, and now they're cool again. Just like scrunchies.

Gaga got her septum pierced a while back, but she hasn't showed it off much. While she has been pumping thick, sculpted brows and inky black hair lately, she takes things up yet another notch with the dark ball of her piercing jewelry. It's not cute or barely there. Like everything else, her nose piercing is amped up.

Gaga's going punk rock all the way. She does nothing in middling fashion and that's why I lurve her so much.

The pop music triumvirate of RiRi, Katy and Gaga has been playing with piercings, which means it's going to start trickling down to their fans (The Navy, KatyCats, Little Monsters) sooner than later.

The good thing about nose piercings is that they are temporary, unlike gigantic hand tattoos. (Hi, RiRi!) When you (or they) tire of the piercing, you can remove it, the hole will heal, and you will cruise along to the next trend.

Any sort of piercing on our around your face is a big endeavor, since it's your face. But you can fake it with jewelry that never even breaks the skin or forces you to go under a needle, like Rihanna did. So use these ladies as your guide for playing with this trend.