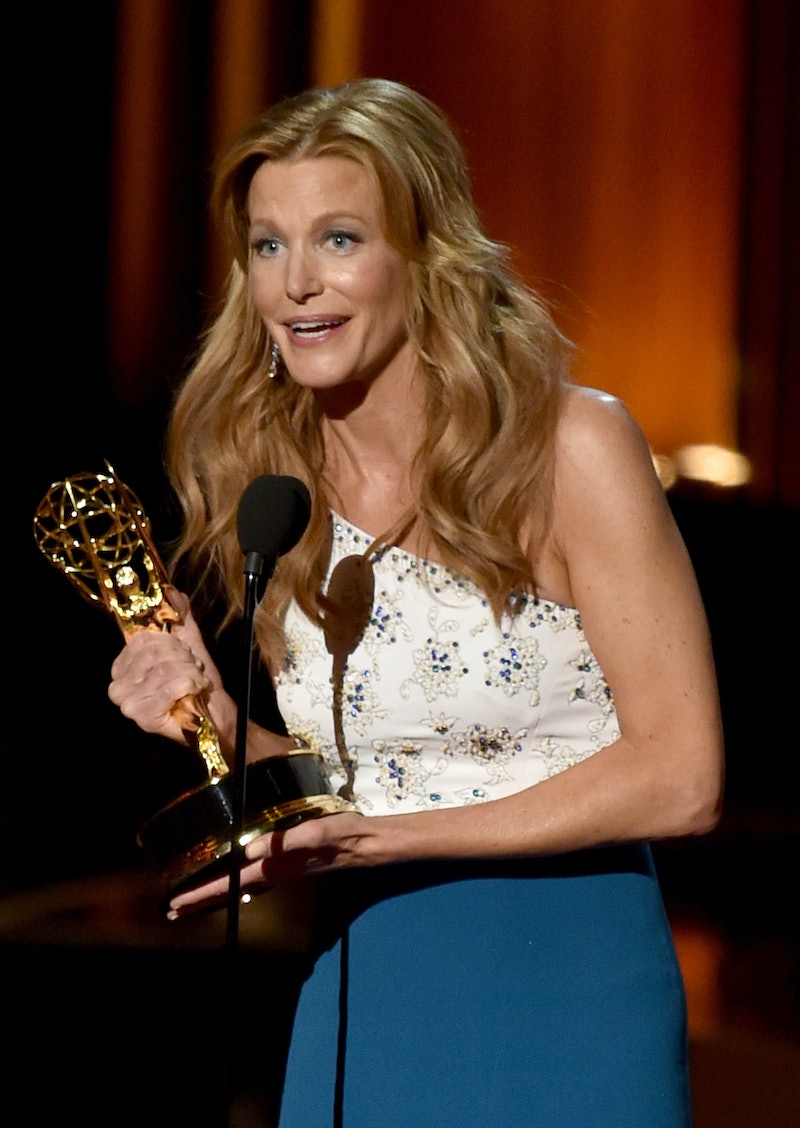 Skylar may have had a terrible year on Breaking Bad, but Anna Gunn is on fire right now. The actress just won an Emmy for Best Supporting Actress in a Drama at the 2014 Emmys. Unlike most film and television award shows — including the Golden Globes and the Oscars, which only allow five nominees in all acting categories — the Emmys lets members of the Academy of Television Arts and Sciences choose between six thespians. The other women nominated for Best Supporting Actress in a Drama were Christine Baranski for The Good Wife, Joanne Froggatt for Downton Abbey , Lena Headey for Game of Thrones , Christina Hendricks for Mad Men , and Maggie Smith for Downton Abbey. Gunn won in this category last year as well, and was nominated in 2012.

With so many nominees, it's rarely possible to be 100 percent sure who will take home the statue, though considering that this was the final year Breaking Bad was eligible, it would be a huge upset if its cast and crew didn't win most of their categories. Aaron Paul took home the male equivalent of Gunn's Emmy, Best Supporting Actor in a Drama, earlier in the evening.

We're also in the middle of Mad Men's last season, but because it's split into two parts and won't air the final eight episodes until 2015, Hendricks could have a shot next year, as well. She's been nominated every year since 2010 and hasn't yet won, and it would be a travesty if she never got the recognition she deserves for playing Joan so well.

In her acceptance speech, Gunn first thanked the Breaking Bad casting director Sharon Bialy. Gunn described how Bialy called her seven years ago and said, "Get your patootie in here and read for this show, it’s the best pilot script I’ve ever seen." Gunn added, "And she was right."

Gunn then thanked showrunner Vince Gilligan as well as the producers, writers, and crew. She added that her BB fellow actors were the "Most remarkable cast I ever could have asked to work with every day."

More like this
“The Door Is Always Open” For Another 'Breaking Bad' Spin-Off, Says AMC Boss
By El Hunt
Jesse Tyler Ferguson Had A Funny Run-In With A Fellow ‘Modern Family’ Alum
By Grace Wehniainen
'Stranger Things' Cast Thinks It's "OK Not To Label" Will Byers' Sexuality
By Alyssa Lapid
20 Photos Of "Beefy" Jeremy Allen White To Tempt You To Watch 'The Bear'
By Radhika Menon
Get Even More From Bustle — Sign Up For The Newsletter