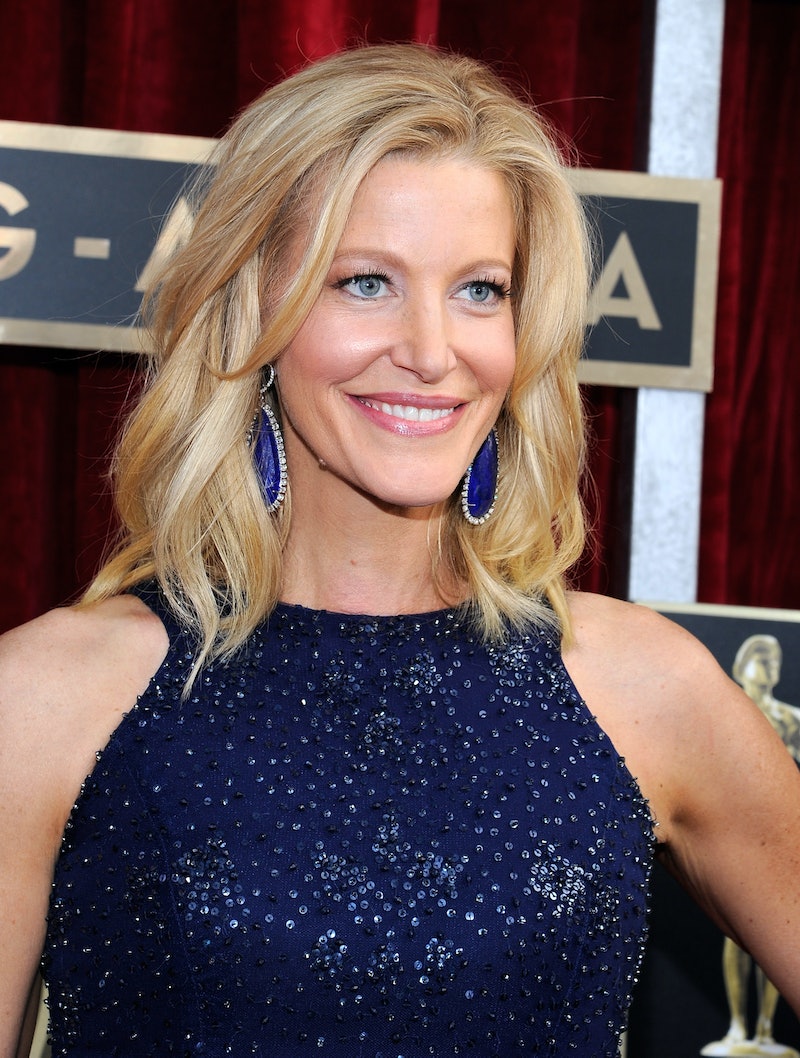 She might not be embodying Breaking Bad's fierce Skyler White on a weekly basis anymore, but you better believe that Anna Gunn is nabbing roles left and right, hanging onto her rightful spotlight. Gunn, who took home a well-deserved Emmy for her role in everyone's favorite meth-inspired TV show, has been busy snatching up a leading role in an upcoming mini-series, guest starring on a TV comedy, and branching out into the world of theater. And all I can say is, "Thank you, sweet baby Jesus," because I was definitely about to sign up for an Anna Gunn-withdrawal support group. (I'm sure it's a thing.)

First in line for Gunn is The Mindy Project's "Be Cool/Girl Crush" episode airing on Tuesday April 8, in which she is officially being added to the show's hefty list of famous guest stars. Gunn is set to play Dr. Sheila Hamilton, "the Tory Burch of Manhattan OB/GYNs," who so happens to be Mindy's girl crush. Apparently, Dr. Hamilton has her eyes set on Mindy's talents and is on a mission to steal her from the men over at Shulman & Associates. But no matter how the episode turns out, I'm just glad someone is calling out the fact that Gunn is more than worthy of "girl crush" status, because she totally is.

Second on Gunn's acting to-do list is to follow fellow BB star Bryan Cranston to Broadway and take the stage by storm (although I'm not sure it's written exactly like that on her to-do list). Gunn, who is no newbie to the theater — she made her Broadway debut in 1996's "The Rehearsal" — will portray the love interest of a blogger (played by Tony Award-nominated Billy Magnussen) in Second Stage Theater's production of Laura Eason's "Sex with Strangers." The two-character play will open this summer and will be directed by David Schwimmer from Friends (yes, you read that right).

And finally (and most importantly, IMHO), Gunn is set to star in the TV mini-series Gracepoint, the US adaptation of BBC's Broadchurch. She's been cast as Detective Ellie Miller, "a wife and mother who was passed over for a promotion in favor of an outsider ... but [whose] disappointment quickly fades to tragedy" in light of a local murder. Gunn will star alongside David Tennant — he portrayed the same character in the BBC version — as the pair attempts to solve the death of a young boy. (I highly suggest binge-watching Broadchurch if you haven't yet, but beware: the US version is probably going to have many of the same elements, so the whole show is inherently a major spoiler.)

With all of these wonderfully complex and powerful female roles for Gunn to play, I have no doubt that she's going to be in our lives for quite a while more. Yay, fierce, female characters!