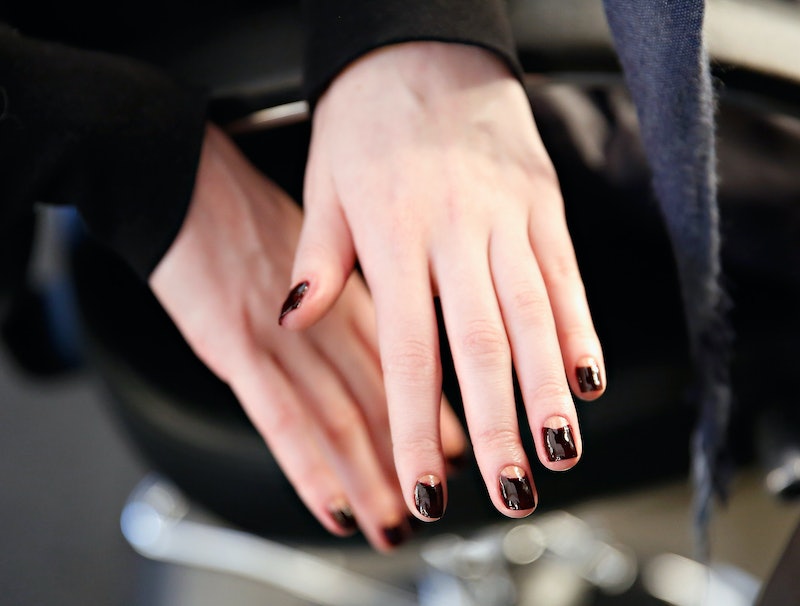 For me, having freshly done nails is the ultimate confidence booster. From my best at-home attempt to a professional-grade shellac application, I love seeing my fingertips glisten with the perfect temporary and customizeable accessory. Thanks to new technology (because the world is honestly an amazing place), your manicure could do more than just make your nails look great. According to Triangle Business Journal, this new nail polish can detect roofies in your drink. Yes, there have been other apps or devices invented that help people to get help if they feel like they're in danger while walking home or to identify when a drink has been spiked or tampered with, but I'm positive there's been nothing quite as subtle and stylish as date-rape-drug-detecting nail polish.

The nail polish was invented at N.C. State University by a four-person company of undergraduate students called Undercover Colors. At the moment, they're raising money so that they can make their prototype even better before a general release of the polish. In addition to receiving donations to the cause, they've already won awards in competitions, such as the Lulu eGames, proving that the general consensus is "we want this." There aren't many details about how exactly it works (Would we still have to drink the roofie'd drink?) but Elle reports that the polish changes color when exposed to date rape drugs.

This idea is not only incredibly impressive, but it's really revolutionary. When it comes down to it, victims are often blamed for things such as abuse (just look at the Christy Mack situation), rape or murder. It's also fact, according to The Washington Post, that sex offenses on campus are up 50 percent in the past three years. We all know that they are often ignored or kept on the lowdown by people in positions of power at universities, making this invention perfect for college aged women like me. It's so frustrating that those who could be raped are still tasked with the responsibility of preventing their rape, but until we have a widespread and consistent system and mindset of teaching people not to rape others rather than teaching them not to get raped, this is a pretty handy accessory. No pun intended.