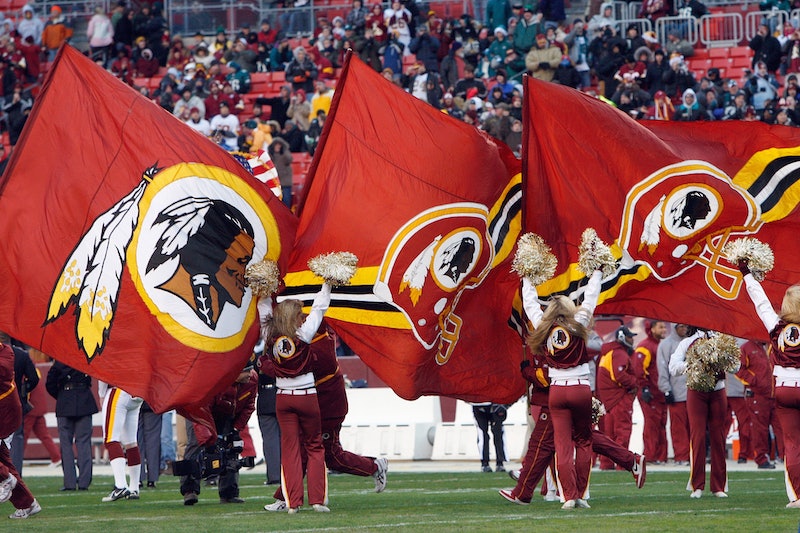 With football season on the horizon, the usual headlines commence: injuries, trades, and...style guides? Slate, The New Republic, and Mother Jones have all said they will no longer use the term "Redskins" in their publications, citing its long history of offensiveness to Native American readers.

Well-recycled AP poll numbers suggest that four out of five Americans think the Redskins should keep their name as it is. It's an issue, many Native activists agree – but certainly not the only one. Here's what activists point out the public also needs to know:

Mascot stories can be a distraction.

Adrienne Keene, a member of the Cherokee nation and the PhD student behind the high-traffic blog Native Appropriations, says these team mascot stories are usually all the same.

“Because [it] affects non-native folks, mostly,” Keene told Bustle. “So that tends to make the news. And most of the coverage of Native peoples in it has been portraying us as whiners or as people who need to get over it.”

But as Keene has argued many times, the story misses the larger point: For Native Americans, this isn’t a new conversation, and it has never been just a question of one sports team name’s racist etymology. It’s a question of understanding the larger context that allowed the team to be called the Redskins in the first place. Among the many nuances of dynamic, diverse, and contemporary Indian culture, there is the bigger point: Cultural appropriations are way more widespread than mascots.

As a student at Harvard, the California-raised Keene often found herself frustrated by her classmates’ ignorance about Native issues. One day, walking by a Cambridge Urban Outfitters, she realized why.

"They had all of these dream catchers, and totem poles, and moccasins, and I kind of put things together, and realized the reason that most of the folks I encountered out here didn’t ever think about contemporary native people as a living, breathing part of their society was because the only images they ever encountered were these things," Keene said. "They didn’t ever see pictures of real native people, so because of that our real challenges and issues didn’t exist in their minds."

She decided to start cataloguing images of Native cultures that had little connection to what she knew as “Nativeness”: generic approximations of beaded-and-feathered Plains Indians from a past era; fictionalized characters that had little to do with tribes past or present; hyper-sexualized Pocahontases that spared no thought for the 1 in 3 Native women who have been raped or sexually assaulted. As she expected, she didn’t have to look far. From the runways of the Victoria’s Secret Fashion Show, to the hipsters at Coachella, to the ice-cream freezer at Safeway, she found caricatures of tribal cultures passively condoned.

In response, Native American activism is alive and well.

In the U.S. alone, there are 566 tribes with a wide array of issues and histories specific to each community. However, as younger members of these tribes connect through a new, social-media based conversation, there does seem to be at least one common concern: The continuing, passive ignorance of wider American culture, which has not yet noticed — let alone registered — this new moment in Native American activism.

And most of it's online in in plain view. According to Native leaders, bloggers, and advocates of all ages, never before has there been such a wide swath of Indian country paying attention to representations of their cultures. Keene and her cohort are not Native American protestors frozen in the late nineteenth-century, building fortresses against invading armies of outsiders. Nor are these the militant, disenfranchised American Indian Movement protestors of the 1970s, burning down buildings and pointing guns at FBI agents. AIM does still exist, but in growing numbers, another group of Native Americans are operating alongside their traditional counterparts: they are lawyers, comedians, designers, professors, journalists, flash mob organizers, and even federal U.S. government staffers. They are Internet-savvy 20-somethings engaged in a thoroughly modern, hashtag-heavy conversation with other indigenous peoples around the world.

Through now-infamous live-in “acculturation” schools, coerced adoption and foster-care, many young Natives were cut off from their tribal communities by practices that supposedly ended with the Indian Child Welfare Act in 1978. Less well-known, however, are the consequences of the U.S. government’s 1956 Indian Relocation Act, designed to encourage assimilation. With a combination of funding cuts to Reservations and incentives for those who chose to leave, tribal members left for cities from Denver to Minneapolis. As the New York Times reported in April, the trend has continued: 70 percent of registered Native Americans live in cities, as opposed to 45 percent in 1970.

“The relocation effort and campaign by the U.S. government — it’s falling apart right now because of social media," journalist Simon Moya-Smith told Bustle. "You know, that’s how we’re reconnecting. Through social media, through things like Twitter and Facebook, we find each other, we socialize, we converse, and that divide and conquer begins to dissolve. It’s a wonderful thing to watch as it happens.”

More than a generation of Native Americans grew up away from the centers of their communities, often attending public schools with standard American history curriculums that rarely mention tribes after the turn of the twentieth century. Indian reservations are also some of the most under-connected spaces in the country, limiting the conversation’s reach.

“What media misses in general is that we are extremely diverse. We don’t all have the same opinion on issues. It’s just like American politics, and the more access we have to social media, the clearer that becomes," Managing Editor at Native Sun News in South Dakota Brandon Ecoffey said.

The U.S. government has work to do, too.

Of course, there are still-lingering wounds from the years of forced adoption, alcohol restrictions, and land battles.

And then there's the big issue: Poverty. According to Kevin Blackbird-Steele, the youngest member of his tribal council at Pine Ridge, the sequester in Washington has had a disproportionate effect on Native American reservations, and it's worrisome. Statistics from Pine Ridge put unemployment at 85 percent.

But figuring out why poverty continues to plague wide swaths of Native America demands nuance. Without it, poverty and alcoholism becomes the flip-side of the idealized "Pocahontases" sold all over; creating what blogger Rob Schmidt calls a "poverty vs. pageantry" dichotomy. That said, poverty remains a major issue for Native country — and it's exacerbated by less-than-consistent coverage by mainstream news organizations.

Andrew Vondall, a member of the Crow nation and a Georgetown student who interns on Capitol Hill, says it's sometimes difficult even to convince legislators that their Native American constituents exist, let alone pay adequate attention to their issues. In his words:

You’ve got all these newspapers planting big stories from New York and California about how much money they have. You see the big huge casinos in Connecticut or just outside of L.A. And then there are stories in the news about how oh ‘Every single tribal member gets this much money’ or ‘Every single tribal member gets free college,’ and lo and behold, they come to find out later on that those tribes consist of maybe only 300 people, where a tribe like mine, the Crow tribe in Montana, or the Sioux tribe in South Dakota, consist of thousands of members who get no money. So it just makes it, if people see that, when they see a bill about Indian spending, they call their Congressman and say, ‘Those Indians get money already, why are we giving them more?’

Editor's Note: Everyone quoted in this piece either explicitly gave the author permission or put their words in the public domain. However, our author has asked us to pull a section featuring an open letter and Tweet from a Native activist uncomfortable being highlighted on our site. Ethically, there is nothing wrong with including statements made in public. But sometimes misrepresentation is in the eye of the beholder, but at the request of the speaker, we've now removed her quote.