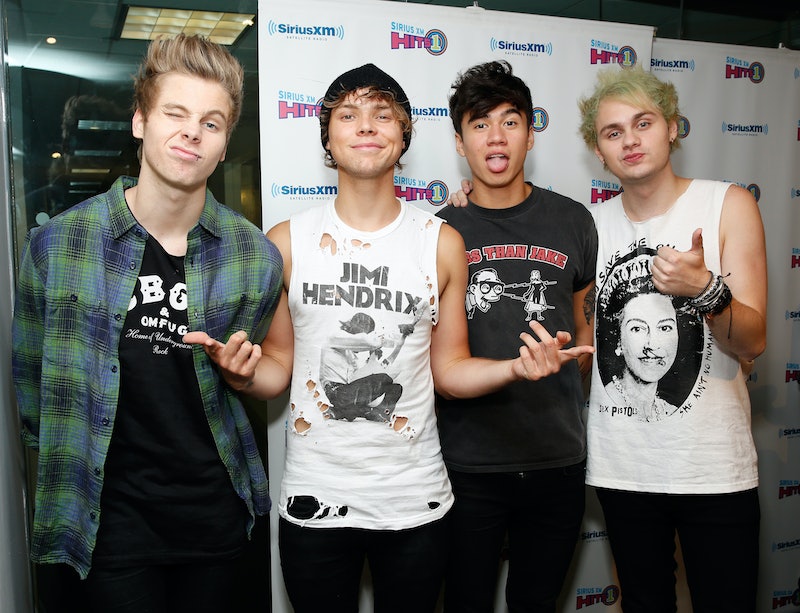 5 Seconds of Summer is a band comprised of four young men, but a boy band they are not. 5SOS is a band band. A band band that plays instruments. A band band that doesn't danc— HOLD UP. Though they do not identify as a boy band, that doesn't mean they can't cut a rug (or a chair). In an interview with MTV, 5SOS members Luke Hemmings, Calum Hood, Michael Clifford, and Ashton Irwin showed off their best sit-dance moves for the camera (overachievers Michael and Luke executed not one, but two moves). I really, really hope they incorporate sit-dancing into their VMA set.

I ranked each of the sit-dance moves (because of course I did). I wouldn't call myself a dance "expert," but as someone who regularly boogies in her chair while listening to tunes at her desk, I feel qualified enough to judge this sort of thing. Onward!

Second Place: Luke's bouncing up and down in his seat move

If I ever saw someone doing that move in public, I wouldn’t be able to tear my eyes away from that person.

Third Place: Michael's swinging his legs over the arm of the chair and bobbing his head move

The confidence. THE CONFIDENCE.

Fourth Place: Michael's sinking down into his chair and nods his head

So understated, so effective.

Fifth Place: Ashton's slouching in his chair and not moving move

Ashton, you’re a cutie patootie, but that doesn’t count as a dance move.

DQ'd: Luke's standing up and holding the arm of the chair and not moving move

He’s neither sitting down nor moving. Sorry sweet Luke, but this move is DISQUALIFIED.