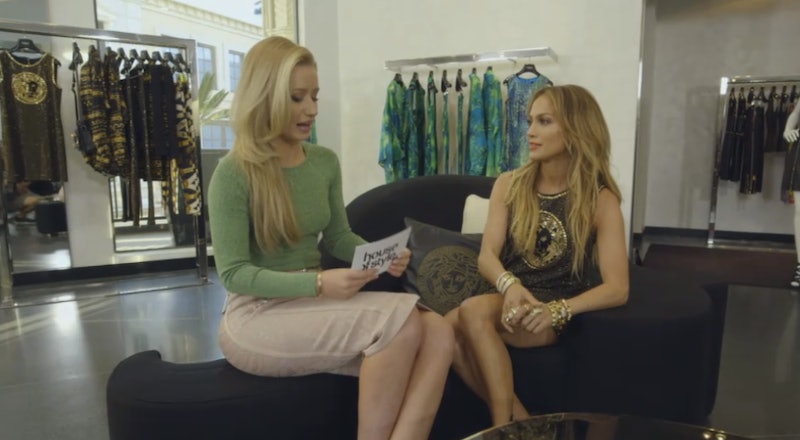 If I were to tell you that Iggy Azalea and J.Lo had a hang-out session, how would you imagine the scenario? They'd probably rendezvous at a Versace boutique on Rodeo drive and bond over a love of sparkly catsuits and their posterior lady lumps, right? Well, Iggy Azalea interviewed J.Lo for the resurrected MTV House of Style, and the situation went down pretty much exactly like that. Turns out, you actually can write that kinda stuff.

In an episode of House of Style uploaded on Friday, host Azalea sat down with Lopez on a pristinely white amoeba-like couch at the LA Versace boutique on Rodeo Drive. Lopez raves about Donatella Versace, saying "She understands a rock star, she understands a superstar and she wants them to look that way. That's what Versace does probably better than anybody." This is the part where I imagine a Maya Rudolph walking on as Donatella and bellowing "I am the queen of rock and roll fashion... GET OUT!!" But hey, that's just me.

In between realizing that they both have a "high fashion booty" in common (have you perchance downloaded Lopez's new song Booty ? Available on ITunes!!! *PLUGGITY PLUG PLUG*) and raving about crop tops, Azalea and Lopez become besties over a shared love of jumpsuits. J. Lo, answering one of Azalea's questions, says that they're her favorite thing to perform in. Azalea, no stranger to the catsuit herself, weighs in on onesie logistics, saying that she too enjoys them. However, she thoroughly disapproves of when they split on you in the middle of a show. "A few times I've had to duct tape my butt for the rest of my performance," Azalea divulges. Oh, international pop-star problems...

Furthermore, is it just me, or are there some Showgirls jokes missing from this interview? Why are there no mentions of Nomi Malone, and why is nobody cheekily mispronouncing Versace as Ver-sayce? I'm sure someone could make a fun allusion to the Lifetime movie where Gina Gershon plays the Versace creative director. Oh, never mind. That would send Donatella into an old-school rage-a-tella. I demand more camp and more irony, and if I can't get it here, I'll just go watch RuPaul's Drag Race.