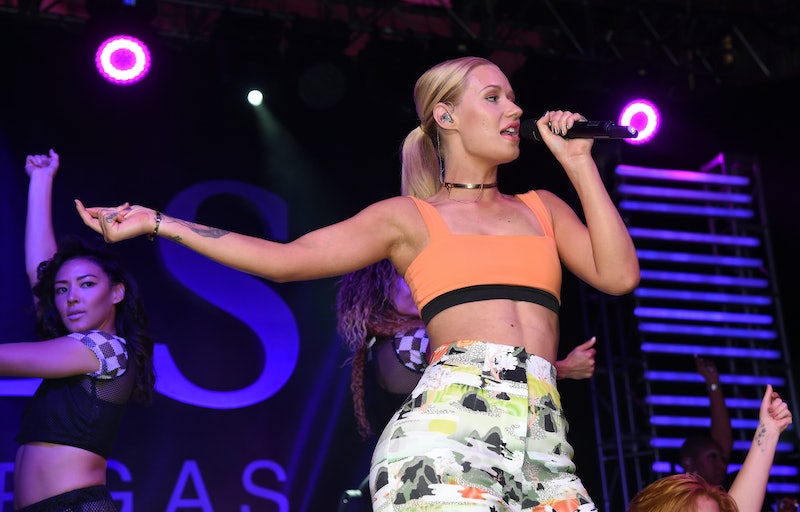 Whatever your opinion of Iggy Azalea — the main ones I hear are "fierce as fuck/the realest" and "queen of appropriation" — when Iggy Azalea fell off the stage at a recent concert she rebounded Carrie Bradshaw-style. Which is to say, she nailed it.

The fall took place during a benefit concert Friday night hosted by the MTV Video Music Awards (the actual awards are Sunday). Azalea was performing her hit "Fancy" when she took a bit of a wrong turn and wound up taking a tumble. According to People she didn't sustain any notable injuries.

Azalea reacted to the whole thing pretty well: She could have just ignored it and dealt with the inevitable press coverage as it came, but she took the situation into her own hands a bit by posting video of the fall on her instagram. She wrote:

Sorry but it would be a crime not to share this with you all, I know I laughed. #StillFinishedtheSongTho #KeptOnRapping #TheShowMustGoOn

It's kind of the falling-down version of Lupita Nyong'o poking fun at her own bikini paparazzi shots, or a real-life version of Sex and the City's Carrie Bradshaw falling down at a runway show and getting up with her game face on. In other words, bad ass. Check the clip below.

More like this
'Stranger Things' Star Joe Keery Ditches The Upside-Down With New Single "Change"
By Radhika Menon
Adele Says It Would Be “Wonderful” To Have Kids With Boyfriend Rich Paul
By Jake Viswanath
Rihanna Is America's Youngest Self-Made Woman Billionaire, According To 'Forbes'
By Hugh McIntyre
Britney Spears’ Honeymoon Plans Include Watching This Movie With Her Husband
By Grace Wehniainen
Get Even More From Bustle — Sign Up For The Newsletter