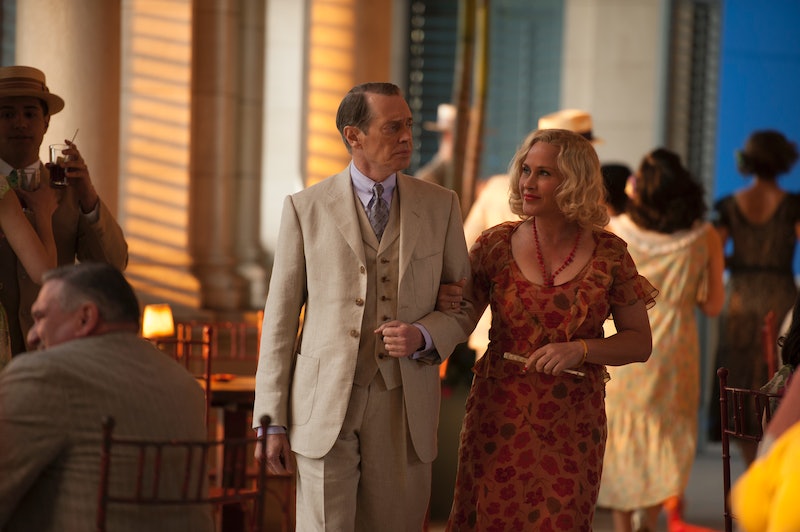 Nucky's last stand is coming. The fifth and final season of Boardwalk Empire will premiere on Sept. 7 and after the death-ridden Season 4 finale (RIP Richard Harrow), its got a lot to live up to. "No One Goes Quietly," claim the promo posters and trailer for the final season of the Prohibition Era drama and considering where the series left off, no fan is surprised. The jig on the boardwalk might finally be up for Steve Buscemi's Nucky Thompson and he can only keep threatening Eli's life for so long before he realizes it.

The fourth season of Boardwalk ended on a high note for fans and for the series, after a slow-burning 12 episodes. We said a fitting goodbye to the only character we actually liked as much as Jimmy Darmody (bless his soul) — Richard Harrow. But aside from losing by far the greatest character on the series, the final meeting between semi-bad guys Valetin Narcisse and Chalky White ended with a bang (literally) and the former getting picked up by the feds and becoming an informant, leaving the latter with a taste for revenge that'll carry over into the upcoming final season. Who doesn't love a good revenge plot?

As far as the first trailer for Boardwalk Season 5, it looks like Nucky's got his back against the wall and is running out of places to turn. But, more importantly, we might finally be getting more of Margaret, who developed into a pretty badass gangster-lady herself last season with her arrangement with Arnold Rothstein in New York. So, with that being said, here are four things that we absolutely need more of in Season 5. Because it's only right that Boardwalk go out in a blaze of fan-loving glory.

As far as I'm concerned, after killing Jimmy off the series in Season 1, Richard carried this show forward. Personally, I have a hard time finding a character to root for on Boardwalk and even though Richard was a cold-hard assassin up until Season 4, I really liked him and rooted for him from his introduction. Sure, he killed people, but he was a genuinely good guy. This series needs a character like that to hold up the emotional factor — whether it be grieving father Chalky next season or not, someone needs to step up to win us over like Richard did.

Was there anything more satisfying when we learned that Nucky had anonymously tipped off the police about the real whereabouts of Jimmy's body? It saved Tommy from having to live with batshit crazy Gillian and sent her to jail for murdering "fake Jimmy" in her bathtub. When we left off in the finale, she was just learning that she'd be going to jail for life, so Season 5 absolutely needs to catch up with her in some capacity so we all know she's suffering as much as she deserves to. #thatbitch

Margaret is killing the game and I've never been more appreciative of these series than I am for them keeping her around and developing her the way that have. In Season 4, Margaret came into her own and toughed it out just to not have to take anything from Nucky. She's always been a badass and brokering her deal with Rothstein showed just how tough she could be. Margaret can run with the big boys and she's not going to take anyone's crap anymore. We need more of her and a lot less of Eli's son, which brings me to my next point.

Please, for the love of god, booze, and the glory of HBO. In Season 4, Willie did literally nothing but drag down Nucky's storyline. I mean, it'd be kind of terrible for Eli, considering he just killed an FBI agent because his son got sucked in Nucky's business. But, that might be a good enough reason for Nucky to end this. Maybe there's still a chance for Eli to reunite with his wife and the rest of his kids if he gets out now. It's not like Nucky really needs him, considering he was willing to blow his brains out in the Season 4 finale.