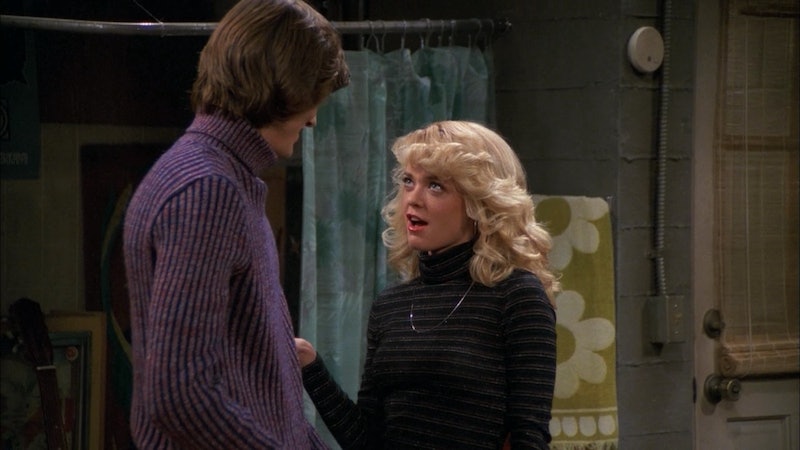 The Internet has been abuzz since the recent and unfortunate news of Lisa Robin Kelly's death in rehab Wednesday night. However, disregarding the "too soon"ness of it all, I couldn't help but wonder why it was that Lisa Robin Kelly was even remotely relevant anymore to begin with. She was hilarious on That '70s Show, but her stint there ended in 2003 and she had not been involved in any major projects since, unless being arrested on multiple accounts is a project worthy of mention. So why did we continue to follow her so closely, when current celebrities battle tooth and nail just to gain space in our public consciousness?

Maybe it was the Farrah 'do. After all, can you think of anyone who could have worn those flippy bangs so convincingly throughout the 2000s? Or maybe it was the mug shot, infamous and super sad. But either way, Lisa Robin Kelly has been stuck in pop culture since she got with Kelso back in the day, and the widespread coverage of her death will be a lasting testament to that.

Is it that the ugly part of ourselves kept interest in her because she was a trainwreck? Because she was the pretty-girl-gone-bad story we yearned for, over and over again? Either way, thinking about it isn't pretty. Lisa Robin Kelly stayed in the limelight because of her transgressions and her transgressions entirely. We watched her fall from semi-grace, until there was no further to fall. Now that she's dead, it's pretty cringe-inducing to think that she only ever made headlines for what she did wrong. Someone kept tabs on her simply to sell papers focused on slanderous reports of washed-up television stars.

Whatever the reason for Lisa Robin Kelly's staying power, we can only hope she rests in peace. She was Laurie Forman once, and we should do our best to remember her that way.