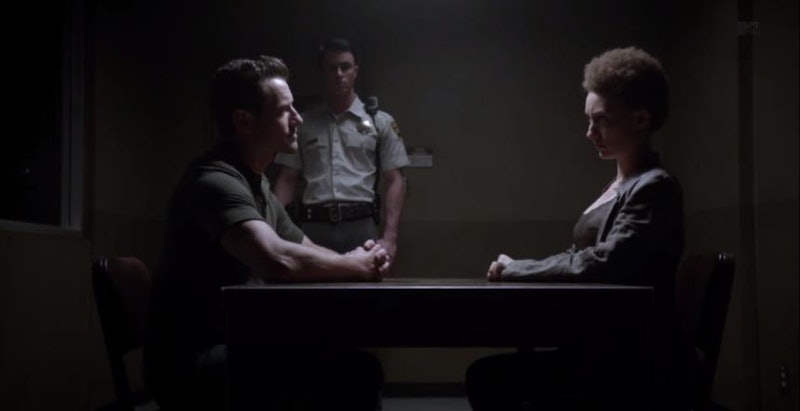 Congratulations, Teen Wolf fans. To all of you who thought Peter was involved in The Benefactor scheme, you are absolutely correct. In Sunday night's special episode of Teen Wolf , it was revealed that the dead pool, and everything that lead to it, was Peter's idea and he didn't even remember it. How could that be, you ask? It all has to do with Meredith's banshee powers.

In the episode "Monstrous," Meredith, who we were lead to believe is The Benefactor, asked to speak with Peter Hale after she was taken into custody by the Beacon Hills' sheriff's department. While everyone was trying to get Meredith to explain why she made the dead pool and how to stop it — including Lydia and Deputy Parrish — she would only speak to Peter. When she was finally in front of him, she was surprised that the burns on his face were gone. Peter told her that they had never met before, but Meredith stayed firm in her belief they knew each other. That's when Peter pulled a very dangerous move and locked his claws into Meredith's neck to see into her memories. And apparently, Lydia was able to see all of them as well. Lucky for the Wolf Pack that Lydia has those banshee powers.

Finally we got some answers. It seems when Meredith was taken to the hospital after passing out from the sounds at the lake house, she was placed in the same room as Peter Hale while he was still in a coma from the Hale house fire that Kate Argent set. Because of her banshee powers, Meredith was able to access the same wavelength as Peter in his coma. She could hear every thought he had — and they weren't great thoughts.

In his comatose, raving lunatic state, Peter was enraged that he became victim to the fire set by Kate. And who did he blame for the fire? Weirdly enough, he blamed his sister Talia. In his mind, he accused Talia of turning the werewolves in her pack into "sheep." He felt as though werewolves were no longer the apex predators. So what did he want to do to fix this egregious error? Take them all out. And by all he meant all of the supernatural creatures in Beacon Hills. He planned out every step of the dead pool process, including using his own money to pay the assassins.

When Peter came out of his memory bond with Meredith, he obviously could not remember any part of this plan, but knowing Peter, that might not actually be the case. The dead pool may have been stopped, but that doesn't mean there isn't more danger awaiting our favorite supernatural creatures in Beacon Hills.