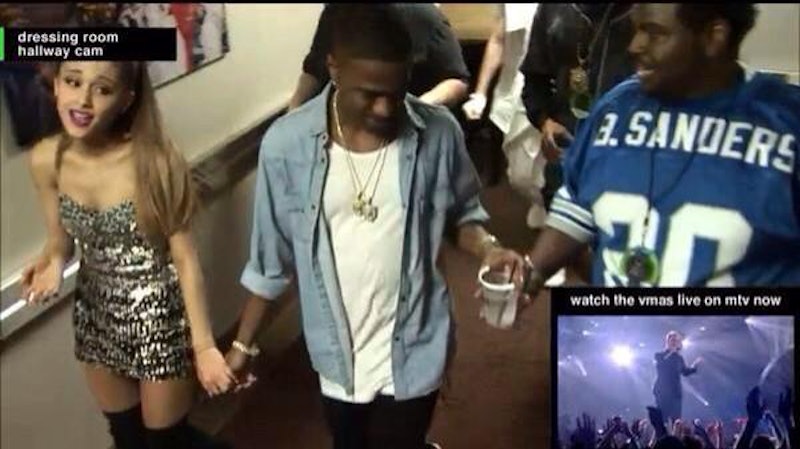 Ariana Grande and Big Sean are definitely a good pair musically, collaboraing on "Problem," which just won Grande a VMA for Best Pop Video. But, when it comes to being a couple in real life, the two have been coy. At least...until now? The two were seen looking closer than close backstage at the VMAs, hugging and holding hands.

Sure, it started innocently enough. Ariana Grande hugged Big Sean, lost her balance, and reached out to him for help. But even after she was steadied and righted herself, they kept holding hands as they walked down the hallway. And it was adorable.

Ariana Grande and Big Sean's whispered-about relationship had people wondering whether the two would walk the red carpet together at the VMAs. When that didn't happen, it seemed like the couple was trying to keep things under wraps. But once the show began, they let their guard down, and finally let a little PDA get captured by the cameras. Of course, as soon as they did, it was all over Instagram and Twitter.

Whether this really is their coming-out moment, or just a friendly gesture between friends still remains to be seen. But they look totally cute together, so we hope that it's the real deal.

More like this
Kanye West Apologizes To Kim K "For Any Stress I Have Caused" In Rare Interview
By Jake Viswanath
Adam Levine Denies Having An Affair — But Admits He “Crossed The Line”
By Jake Viswanath and Radhika Menon
Stormzy’s “Mel Made Me Do It” Is A Tribute To Black Talent & Success
By Catharina Cheung
Everything To Know About Taylor Swift’s 10th Studio Album, 'Midnights'
By Grace Wehniainen and Jake Viswanath
Get Even More From Bustle — Sign Up For The Newsletter