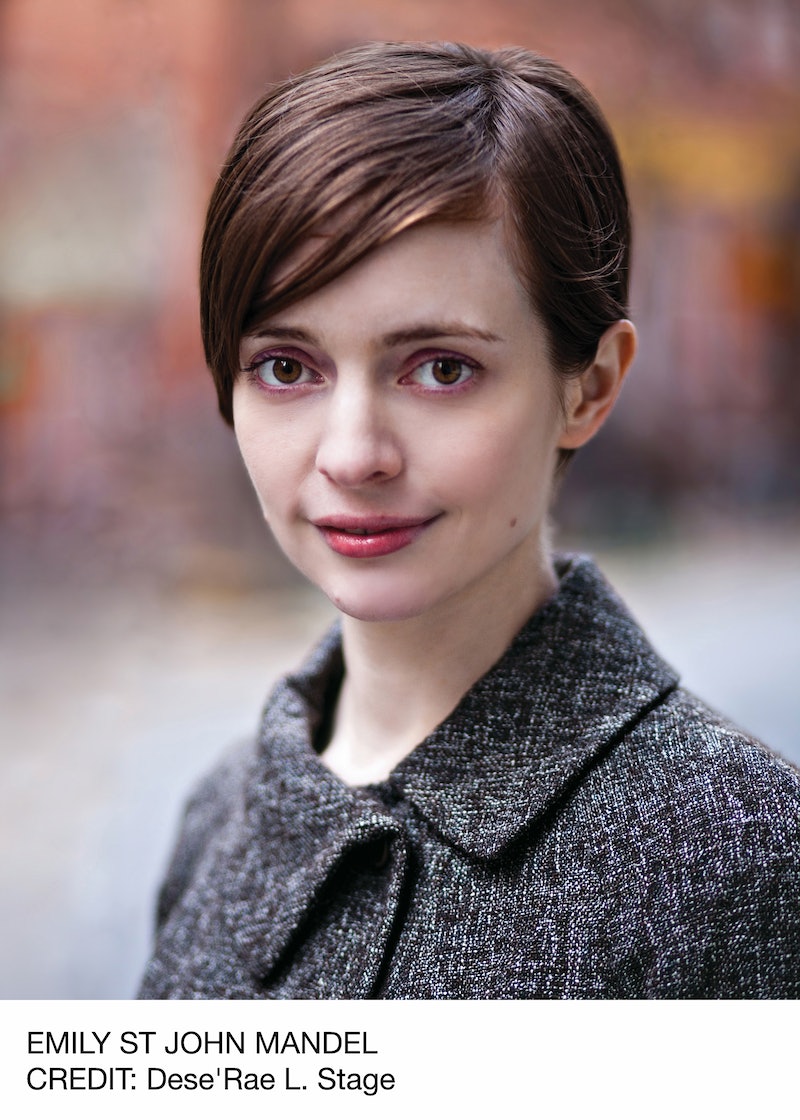 Over iced coffee in Brooklyn, Emily St. John Mandel tells me that her fourth novel, Station Eleven (Knopf), is her favorite of her titles so far. This highly touted work is a departure from the type of book those who know Mandel have come to associate with the author, who's already an acclaimed literary noir novelist. But Mandel has not only crossed over into the literary fiction world with ease, she's about to make a splash: her characters are the most compelling, original figures she's portrayed so far.

Station Eleven is a complex, eerie novel about the years before and after a pandemic that eliminates most of humanity, save for a troupe of actors and a few traumatized witnesses. Mandel's novel weaves together a post-apocalyptic reckoning, the life of an actor, and the thoughts of the man who tries to save him. It's an ambitious premise, but what glues the parts together is Mandel's vivid, addictive language. It's easy to see why she'd claim this novel as her most prized: Station Eleven is a triumph of narrative and prose, a beautifully arranged work about art, society, and what's great about the world we live in now.

I spoke with Mandel, a Canada-bred, Brooklyn-dwelling novelist about this stunning novel and about her approach to work.

BUSTLE: How’d this plot develop for you? Did you start with a character you wanted to follow, or with a story?

EMILY ST. JOHN MANDEL: A little bit of both. I started with the idea that it'd be interesting to write about the life of an actor. My husband is a writer as well, and he has some experience writing plays, so I have a little bit of experience with the way-off Broadway theater scene in New York. There's a little bit about it that reminds me of the dance scene in Toronto, which is something I was a part of before I started writing. There's something similar about the experience of someone aspiring in those worlds. You devote your entire life to art in a kind of field where your chances of acheiving fame or financial stability are incredibly low. There's something interesting about that! I originally thought I'd write a book about an actor in a Shakespearean acting troupe, maybe one that travels regionally in Canada. But I really love post-apocalyptic novels. I loved The Dog Stars by Peter Heller. I really liked The Road. And so I had been thinking for a while that I had wanted to write a book along those lines. And while I am happy with my first three novels, I don't want to write any literary noir for a while. I'm afraid to be pigeonholed as a crime writer.

I wanted to write a love letter to the world we find ourselves in.

I wanted to write a love letter to the world we find ourselves in. It's a world where — you got here by subway, and it's a fast train underground, and we have electric lights, and water comes out of the tap, and we have access to antibiotics. And these are things we totally take for granted! So a way to write about that is to write about their absence. In the way that a requiem is a way of considering something is already gone, it's a love letter in the form of a requiem. It was a matter of those things coming together over a period of time.

You explain in the notes that the production of King Lear that opens the book is inspired by James Lapine’s 2007 production, in which children played the children’s parts. If you staged the play, would you have kids play the roles?

That's a good question. It wouldn't have occurred to me if I hadn't seen the production. The answer's probably yes, but then it'd be plagiarism! It was such an interesting production because there were adult actors playing the actual parts, but then onstage, as the audience was entering, you see these three little girls. They never have a line of dialogue in the play, but they were just on stage playing a game. Later they came back as hallucinations in the mad scene. It lent a kind of pathos to it, because the idea of those characters in their adult versions — they're so evil! But you see that they were children once. It brought an extra level of sadness.

Shakespeare’s works play a big role in the novel. Were you always set on focusing on his plays over any other playwright’s?

It started off a troupe that performed plays from a range of playwrights, including teleplays, because I thought people might miss those. But I had a troupe 20 years after the end of the world performing episodes of How I Met Your Mother and Seinfeld — it may have been funny, but those are such products of our modern world. It seemed incongruous to have, in a post-electric world, these teleplays being performed.

The reason I ended up going with Shakespeare is that when I was first describing this play to my husband a few years ago, he said people would want what is best about the world, which really stayed with me. And of course this is a non-objective value judgment on my part, but I felt that what was best about the world would have included the plays of Shakespeare.

I felt that what was best about the world would have included the plays of Shakespeare.

I hadn't known that much about his life, but the more I started reading about him, the more these interesting parallels started to emerge. In his time, theater was a matter of small troupes traveling from town to town. And the plague, too — he lived in a time when people would be haunted by their memories of pandemics in the recent past. It was really interesting in a book where everyone is traumatized by a recent flu, to have that parallel.

Kirsten carries around precious items of sentimental value. Imagine you’re living in your novel — what would you carry around?

A compass. An old-fashioned watch. Some books, if I could possibly preserve them. A road atlas would be helpful.

It's interesting — there's a bookstore in the U.K. that's recreating the Museum of Civilization that's in the novel. I've been following the Twitter feed, and it's so funny to see what people would choose to save. Some people would save an atlas ... others say, "This is really sad, but I'd save my iPhone." Which is interesting, because where would you plug it in?

You, like Arthur [the actor in the novel], hail from a small Canadian island.

Yep, it's a very thinly fictionalized version of the island.

Do you think you and Arthur are similar in any other ways?

I'm more similar to Miranda [Arthur's first wife], who's also from the island. I liked her better. I have sympathy to Arthur, but he's famous, which I think can warp a person, and he's pretty vain. I hope I'm not too similar to him. But Miranda seemed to me to be a character with more integrity.

I guess one thing that we have in common is this feeling of slight disorientation: not being quite sure how you ended up in this life. I definitely feel that sometimes.

Miranda is very private about her work. Is that how you are?

Yeah, that's fair to say. I definitely don't show my work to anyone until I have a polished draft — which is funny to say, because what seems to me a polished draft is nowhere near what the book is like when it's published. I'll show it to three people who are all novelists, and then take it to my agent.