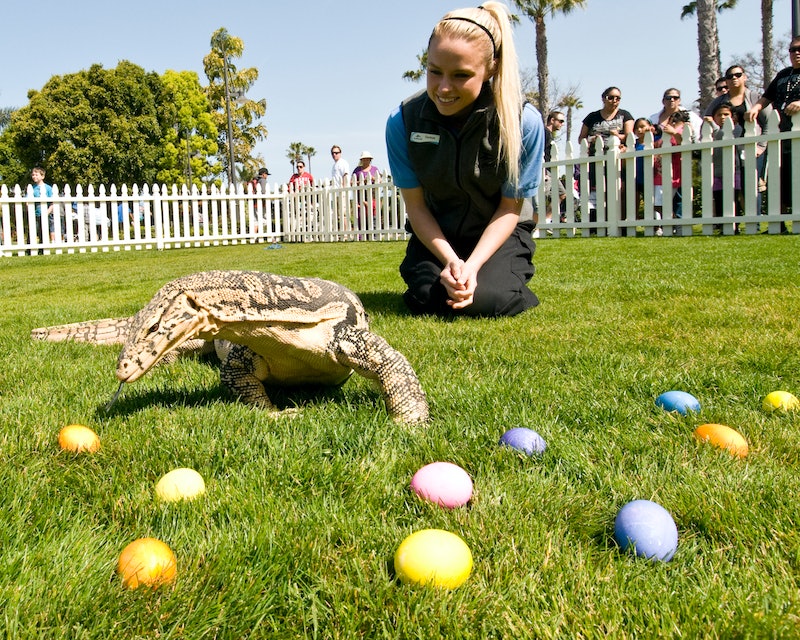 Here's a headline you probably didn't expect to see: People for the Ethical Treatment of Animals, better known as PETA, is buying up SeaWorld stock amid SeaWorld's ongoing financial and PR struggles (Blackfish, anyone?). It's a move which, given SeaWorld's very hard line on animal rights, seems insane. But there's more to it than meets the eye, at least so PETA claims — the whole thing is part of a plan to gain representation in the company's general meetings, where they could submit formal question and shareholder resolutions, according to The Independent. Basically, PETA is trying to take over part of SeaWorld.

For over ten years, this has been part of PETA's playbook when dealing with corporate entities they consider guilty of mistreatment of animals. In 2003, PETA announced investments in multiple meat-centered companies — Tyson Foods, Hormel Foods, and restaurants like Denny's and Chili's — with a similar stated intention.

First, buy up enough stock to get into the meetings, then start hammering away at implementing reforms. Back in 2010, PETA was already invested in a whopping 80 companies.

It's a strategy that's somewhat paid off in the past, with certain corporate chains — Safeway and Ruby Tuesdays being prime examples. Those two companies made concessions and compromises after PETA became a major shareholder, agreeing to purchase their meats and eggs from providers with less-brutal methods of slaughter than the ones they'd previously bought from.

But therein lies the thorny issue with all this: Plenty of PETA supporters are unaware the organization is spending money investing in the very companies it ethically objects to, and it's probably safe to say that much of the money donated to them wasn't done so with that understanding.

As The Independent observed, for example, prominent celebrity PETA supporter Cher took to Twitter to voice her outrage after news broke of the SeaWorld buy.

Cher later conceded that the reasoning behind it could have been valid. But its fair to ask whether this is an ethical moderation of their traditional animal rights message — especially considering PETA stands to profit from the successes of the companies they invest in.

Obviously, not everyone is going to agree about the extent to which animals should be protected from harm. As a vegan, I feel this conflict acutely — I'm unsure whether getting Safeway to buy meats from companies that slaughter more "humanely" is really much of a victory, because I don't regard killing animals for needless consumption to be ethical, even under the best circumstances.

That said, given the implausibility of these corporations halting production — I don't think an executive order banning meat sales is coming anytime soon, nor would that be particularly positive in the end — it makes sense why somebody would support that kind of pragmatic approach.

As for SeaWorld, though, they don't need to fear anything like a corporate takeover. According to Monday's reports, PETA only holds about $2,900 worth of shares in the aquatic theme park franchise, which may be enough to get their foot in the door, but ultimately, likely won't change SeaWorld's direction in any way.

More like this
This Is When Netflix Is Going To Start Charging You For Sharing Passwords
By Darshita Goyal
6 Organizations Fighting Police Brutality That You Can Support Right Now
By Syeda Khaula Saad and JR Thorpe
Eurovision Has Been Given A Whole New Look Ahead Of Its Liverpool Debut
By Bustle UK
'Wednesday' Star Emma Myers Thinks A Wenclair Storyline Is “Possible” In Season 2
By Alyssa Lapid
Get Even More From Bustle — Sign Up For The Newsletter
From hair trends to relationship advice, our daily newsletter has everything you need to sound like a person who’s on TikTok, even if you aren’t.