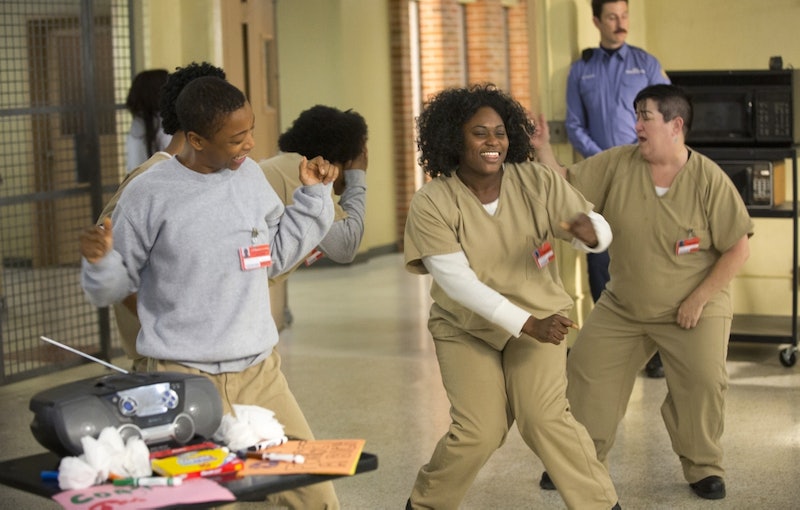 Netflix notoriously doesn't release any numbers surrounding the way the public consumes their service. You can bet they're running just as many experiments on us as Facbook and OKCupid, but they won't even tell us how many people are watching House Of Cards. This can get frustrating when it comes to certain endeavors — for example, trying to figure out how popular shows like Orange Is the New Black and House Of Cards actually are compared to how much buzz they acrue. We've got one kind of expected way of measuring one of those show's viewers, though: Orange Is the New Black is apparently the second-most pirated show internationally. If we needed confirmation people were actually watching, this might be as close as we'll get.

Falling behind only the monstrously pirated Game Of Thrones, Orange Is the New Black's was downloaded "mostly illegally" around 60 million times in six months, which The Washington Post points out is "more than the number of Netflix’s total users." These are also numbers that kinda shit on the assumption that Game Of Thrones is so heavily pirated because of the expensive wall around HBO's content, or that Breaking Bad was so heavily pirated because of AMC's resistance to getting hip with making their product accessible online. Aside from the free content on Hulu — the stuff where you pay in time spent consuming commercials — Netflix is literally the most affordable and accessible option for streaming new and old shows alike. Well, aside from the completely free, illegal options. As TWP's Cecilia Kang put it:

The fact that Netflix shows are also being voraciously downloaded illegally renews industry worries that there are no clear solutions to piracy. [...] But even Netflix, which at $8 to $9 per month for a streaming-only plan costs a fraction of a typical cable bill, may not be able to curb online theft.

To be fair to my previous theories on the roots of certain shows' piracy problems, Orange Is The New Black seems to be more heavily pirated internationally than here in the states. And this still has its perks for Netflix: They've never been ones to focus on numbers, at least outwardly. Translate that to this, and they might be grinding their teeth at piracy foiling parts of their message to the public. But this news is also providing Orange Is the New Black with even more street cred, in a way: Now we actually know some numbers, and they're pretty big. More than that, we also know that that number is just a fraction of those who actually watched the show through the platform that hosts it. That's good news for humanity, at the very least: OITNB isn't perfect, but in terms of representation it's not the worst thing for the world to have its eyes trained to.