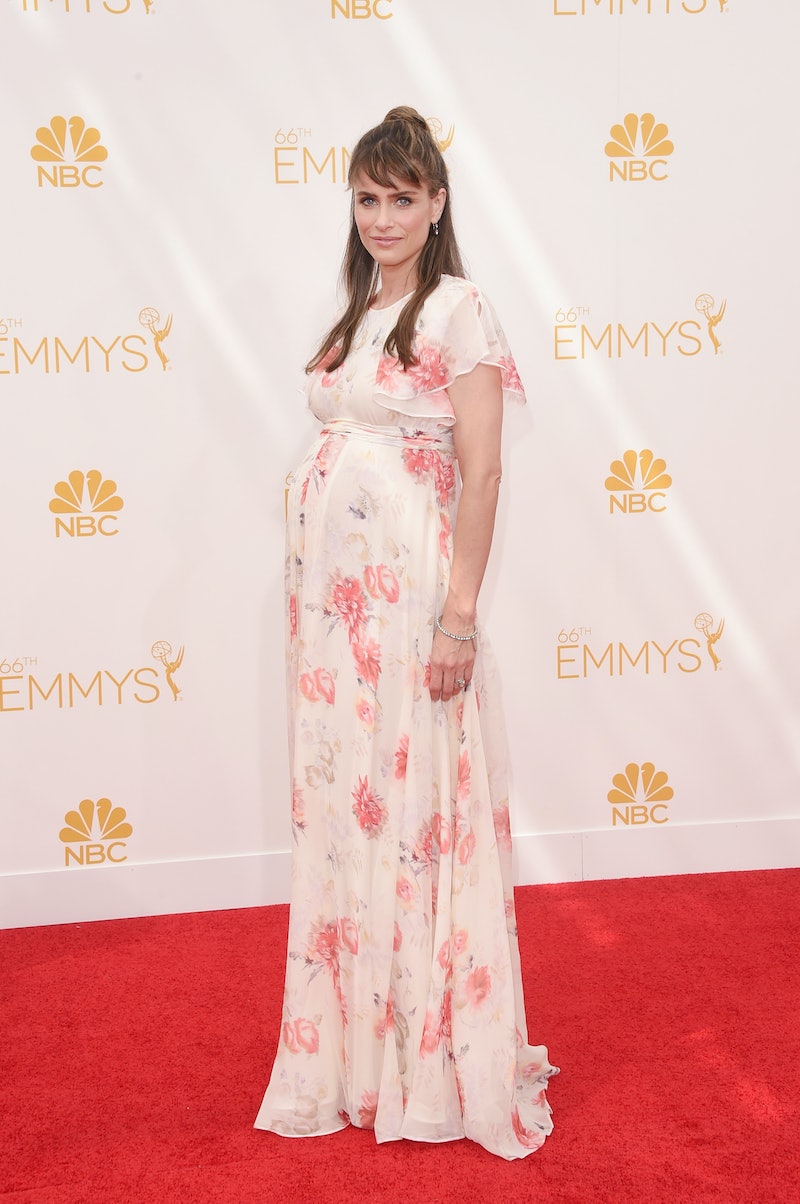 We knew there was bound to be some surprises during the 2014 Emmy Awards (after all, we all remember the travesty of the 2013 Emmy Awards, when Newsroom's Jeff Daniels managed to somehow beat both House of Cards' Kevin Spacey and Breaking Bad's Bryan Cranston — we're still in shock), but we didn't expect to see an Emmys surprise this early. Those watching E!'s red carpet special prior to the Emmys tonight were shocked to see that Amanda Peet is pregnant, and seemingly well along.

The actress, who was walking the red carpet alongside husband and Game of Thrones creator David Benioff, is expecting her third child — the couple has two daughters, seven-year-old Frances and four-year-old Molly. But a pregnancy isn't Peet's only high-profile project. Aside from boasting a recent role in The Good Wife, the actress also was cast in Mark Duplass and Jay Duplass' HBO series Togetherness about two struggling Los Angeles couples.

Before Togetherness' debut, however, Peet is turning heads with her pregnancy debut — particularly since maternity looks seemed to be the trend on the 2014 Emmys red carpet. Nashville's Hayden Panettiere was showcasing her mom-to-be glow (and told reporters on the red carpet that she's expecting a girl), while Zoe Saldana proved she could rock maternity style last week at a pre-Emmys red carpet.

Still, Peet gets the award for most surprising pregnancy reveal. Now let's just hope that finicky Best Actor in a Drama category doesn't shock us even more this year.

More like this
Katherine Ryan Has The Funniest Response For Those Who Doubt Her Husband
By Alice Broster and Darshita Goyal
Amanda Gorman Shared A Powerful Message On Meghan Markle’s Penultimate Podcast
By Darshita Goyal
Our First Look At 'Vardy V Rooney: A Courtroom Drama' Doesn’t Disappoint
By Bustle UK
Owen Warner's Net Worth Might Surprise 'I'm A Celeb' Fans
By Sam Ramsden
Get Even More From Bustle — Sign Up For The Newsletter