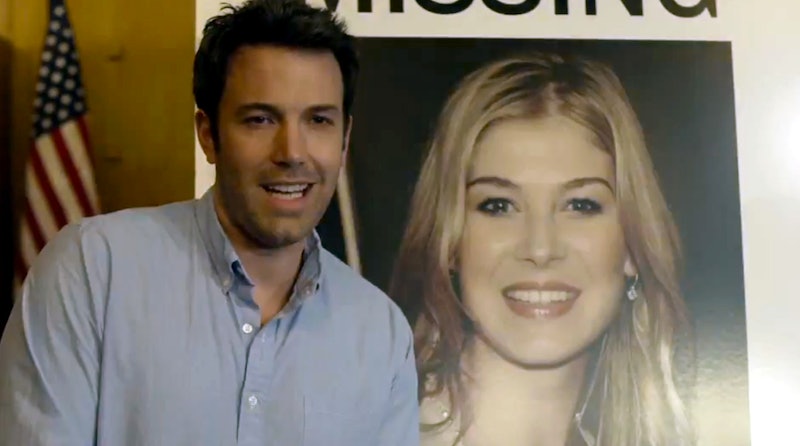 Fans of Gillian Flynn and David Fincher got a nice surprise during a commercial break for Monday night's Emmy Awards: A new Gone Girl trailer. And, wonderfully, one that showed us a lot more of the movie than that first one did. Luckily, for those who haven't read the book, this new trailer for Gone Girl doesn't reveal anything that keen eyes would be able to identify, but it does show a lot for those who have indulged in the original story. It's kind of the perfect tease. Nearly every shot is wrought with hidden depths and meaning, but it also keeps everything as oblique as possible which is something a mystery as compelling as Gillian Flynn's novel deserves from its trailers.

Book fans will likely be pleased (but don't worry non-book fans, I won't spoil you). Certain second- and third-act twists are not revealed, but everyone's still treated to an expanded look at the world and situation we're working with. Tyler Perry (yes, that was Tyler Perry) is more visible as the lawyer for Ben Affleck's Nick, and we see a lot more of Neil Patrick Harris' character, too. So far the marketing team for Gone Girl's doing a bang-up job of towing the line between teasing and spoiling. Let's hope they can keep that up heading into the film's Oct. 3 release.

More like this
A New Princess Diana Documentary Tells Her Story Like Never Been Told Before
By Frances Stewart
Everything To Know About 'The Hunger Games' Prequel Movie
By Grace Wehniainen and Radhika Menon
The 'PLL: Original Sin' Season Finale Finally Revealed A’s Identity
By Alyssa Lapid and Kadin Burnett
‘The Simpsons’ Will *Finally* Address How They “Predict The Future”
By Sam Ramsden
Get Even More From Bustle — Sign Up For The Newsletter