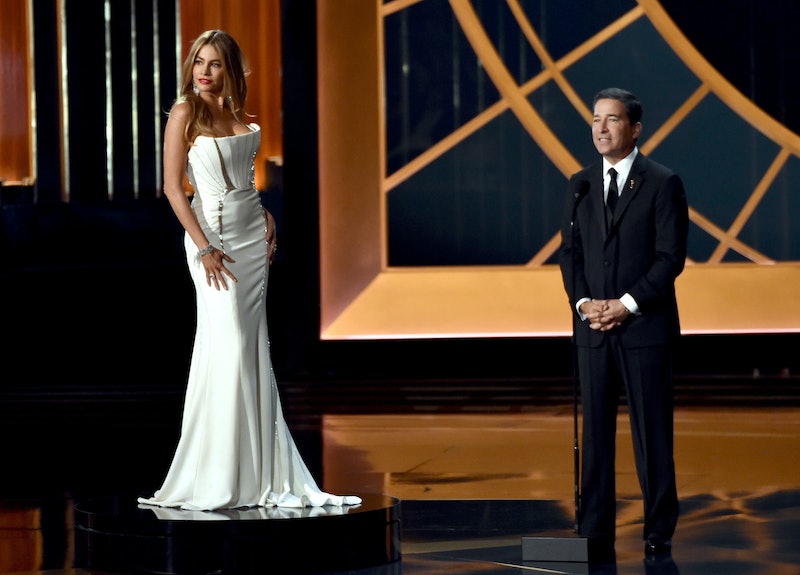 The 2014 Primetime Emmys were kind of a disappointment. Oh, it had its high points, but overall it was a fairly boring ceremony, especially coming one day after the more exciting 2014 MTV Video Music Awards. Still, of all its lowest points, there was none more disappointing than Sofia Vergara on a spinning pedestal during the Academy President's speech, showing off her "assets" during an otherwise touching speech about diversity. Yeah, it was that kind of night. Everyone was justifiably upset at the sight of a beautiful Latina woman being used as eye candy in such a disrespectful manner, even as a joke, but apparently Vergara thinks we all need to relax. In fact, Vergara put critics of the Emmy pedestal on blast, blaming one mysterious person in particular for taking the gag too seriously.

"I think its absolutely the opposite," said Vergara backstage at the Emmys. "It means that somebody can be hot and also be funny and make fun of herself. I think it’s ridiculous that somebody started this—I know who she was—who has no sense of humor [and should] lighten up a little bit."

There are so many things wrong with Vergara's defense of the gag that I'm not even sure where to start. In the first place, no one thinks, or should think, that someone can be hot without being funny or capable of making fun of themselves. In fact, Hollywood is packed with conventionally attractive people who are also hilarious and who have made widely respected jokes about their own attractiveness. Zac Efron immediately comes to mind. The problem with the bit was not that Vergara was "too pretty to be funny" or "too hot to make fun of herself for being hot." The problem was that the bit involved her standing on a pedestal, spinning around to show off her curves, and having them highlighted as "something compelling to look at" in the middle of a speech about diversity on television.

It wasn't cute, it wasn't ironic, it wasn't groundbreaking; it was a bad joke that was poorly timed and pretty offensive. That Vergara went on to blame someone for "start[ing] this," like criticism of the gag is some kind of rumor making a telephone-like round on the playground, is even worse because it proves that she missed the point of the offense being taken on her behalf. I'm sure that since she was asked about it onstage, Vergara has become aware that the criticism is more widespread than she initially realized, but the fact that her first move was to dismiss the accusations of sexism as being propagated by someone with no sense of humor is really disappointing.

The fact of the matter is that we all understand that it was meant to be a joke. We got the joke. It's just that the punchline was too offensive to be funny and the entire sequence just left a bad taste in a lot of people's mouths. There are numerous ways that Vergara could have poked fun at her own status as a sex symbol, and there are numerous ways that the president of the Academy could have spiced up his speech to get people to listen (have Weird Al sing a bad rendition of it perhaps?). To combine them into one sexist gag was a poor choice on everyone's part and that needs to be discussed and addressed soon.