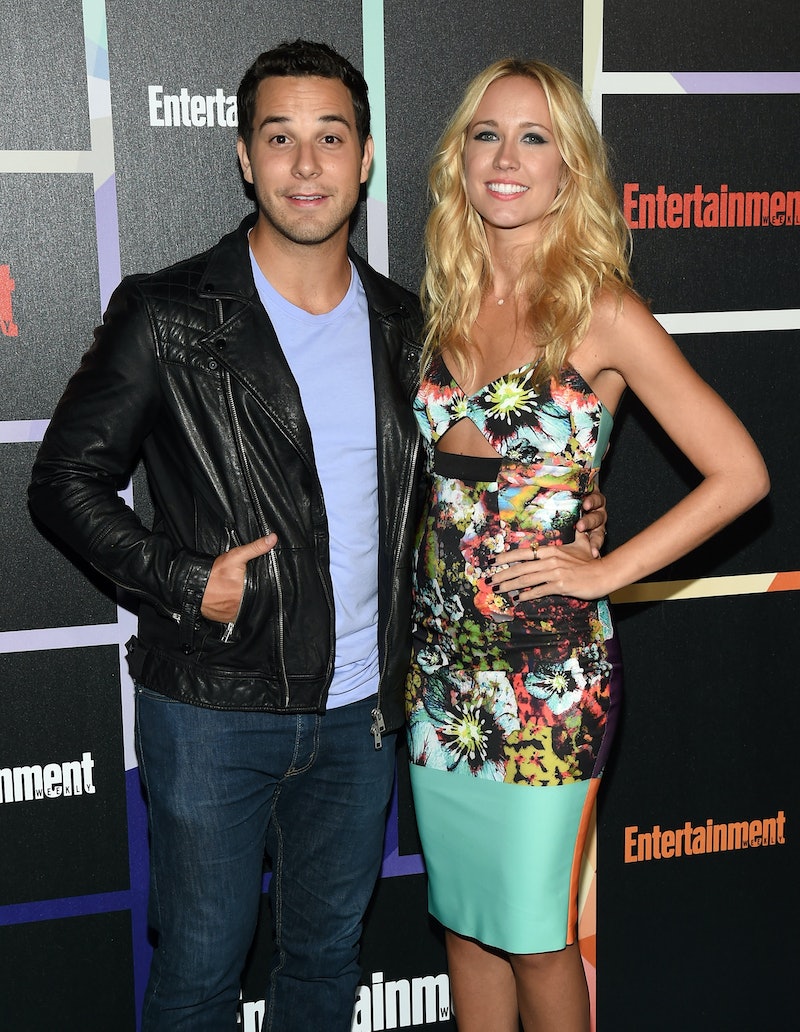 If you’re a Pitch Perfect fan, chances are you’re obsessed with how perfect Jesse and Beca are together. How could you not root for this aca-dorable couple? But in real life Skylar Astin and Anna Kendrick aren’t an item. Instead, Skylar Astin is dating Anna Camp, aka the actress who plays Aubrey. Sure, this may not be how the movie goes, but they’re ridiculously cute together and I certainly approve.

Last June, news broke that the Pitch Perfect pair was a couple. At the time, Camp was in the middle of divorcing Michael Mosley, a fellow actor. The two had been married for three years, but cited irreconcilable differences. A source told Us Weekly, Astin and Camp were friends for awhile, saying, they "had a great connection and became friends, but nothing romantic happened until after she separated from her husband. They have amazing chemistry."

Even if they started as friends, it was love at first sight for these two, or at least for Astin. According to a source, this is what happened during their first appearance as a couple: "Apparently backstage Skylar was talking about how he loved her from the first day they met." How cute is that?

Let’s imagine how different Pitch Perfect would’ve been if Aubrey and Jesse were a love match on-screen too. Hey, it’s a great way to pass the time while we all wait for Pitch Perfect 2.

It seemed like the start of a normal school year at Barton College, until Jesse came across Aubrey, a girl he'd never met before.

When they first locked eyes, on the inside, he was all:

But outwardly, he kept his cool:

She, too, was taken aback. She did a double take.

But then tried to hide her awe:

Jesse went to his BFF Beca for some advice about how to win Aubrey over.

Meanwhile, Aubrey tried to get herself together. She looked in the mirror and scolded herself.

But her bestie Chloe knew the truth.

So Aubrey decided to give Jesse a chance, accepting his offer for a date.

When she realized he was right, she was so excited she almost puked.

Luckily, she maintained her composure until afterwards. Then she went and had a dance party with the Bellas.

And the rest is history:

Is it just me, or is Aubrey so much better when she's not a control-freak, puking all over the place? I'm definitely a fan of this aca-mazing couple — on-screen and off!

More like this
Rita Ora Celebrates Finding Her "Fairytale" Ending With Taika Waititi
By Sophie McEvoy and Catharina Cheung
Molly-Mae Hague & Tommy Fury Celebrate Pregnancy Reveal In The Sweetest Way
By Sophie McEvoy and Sam Ramsden
What Is Miles Teller’s Net Worth? The 'SNL' Host's Bank Account Is No Joke
By Meg Walters
Lin-Manuel Miranda & Tituss Burgess React To 'Little Mermaid' Casting Backlash
By Radhika Menon
Get Even More From Bustle — Sign Up For The Newsletter