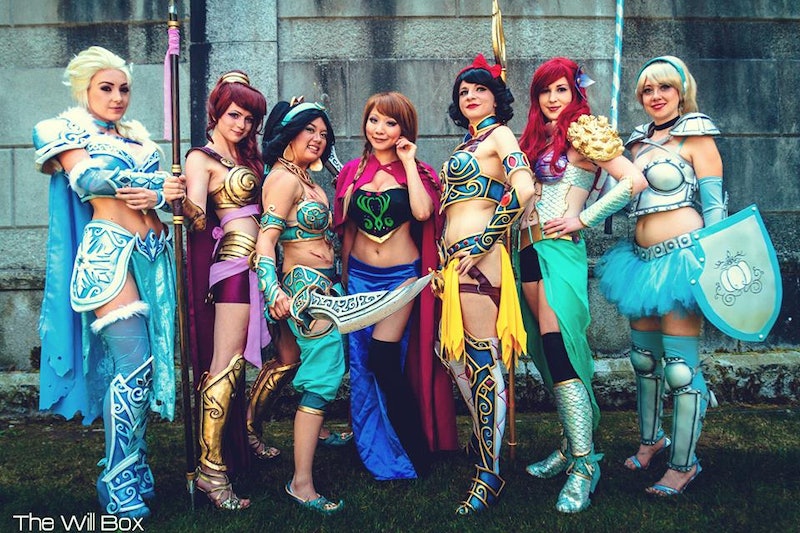 It looks like our favorite Disney princesses don't need a man to save them from danger anymore. Photographer Will Box captured photos of the ladies at Anime Revolution 2014 cosplaying as warrior Disney princesses. These women are so badass that they'll give Xena and Buffy a fair fight if an argument should ever arise.

Forget about those fluffy dresses and delicate accessories that are usually expected from a princess's wardrobe — there's not a glass slipper in sight. Instead, these warriors are adorned with fashionable armor and colorful blades. Each one's princess of inspiration is clear in the outfit, with the help of iconic themes and symbols.

It looks like Ariel has gotten hands on her daddy Neptune's trident, or maybe it's even her own. The king of the sea probably thought it'd be a good idea for her to have some lethal protection after Ursula stole her voice. Elsa's garment is adorned with fur lining, perfect for the snow, and her hair is just as icy blonde. Megara's hair is as tidy as ever, her signature purple and gold armor probably crafted bye the Greek gods themselves. A perfectly-tied red bow sits on Snow White's head, the rest of her armor a metallic spin on the signature dress. Cinderella has a little blue tutu to pay homage to the gala gown that her Fairy Godmother gifted her. The magenta cape tied around Anna's neck is as flowy as ever. Jasmine has her traditional head tie and earrings, but with these kickass blades that look as sharp as Rajah's claws.

You can check out some of the solo shots of the princess fighters below:

Forget about a prince in shining armor coming to save me, I want one of these ladies to come rescue me from the villains of Disney — and let me know where I can get some of those snazzy weapons. Check out the rest of the photos of the heroine troupe here.

More like this
Side Character Energy Has Arrived — Here’s What That Means
By Sophie McEvoy
'The Great British Sewing Bee' Semi-Final Is Extra Special For This Reason
By El Hunt
“The Door Is Always Open” For Another 'Breaking Bad' Spin-Off, Says AMC Boss
By El Hunt
Neil Patrick Harris Will Play 'Doctor Who's “Greatest Enemy” Yet
By El Hunt
Get Even More From Bustle — Sign Up For The Newsletter