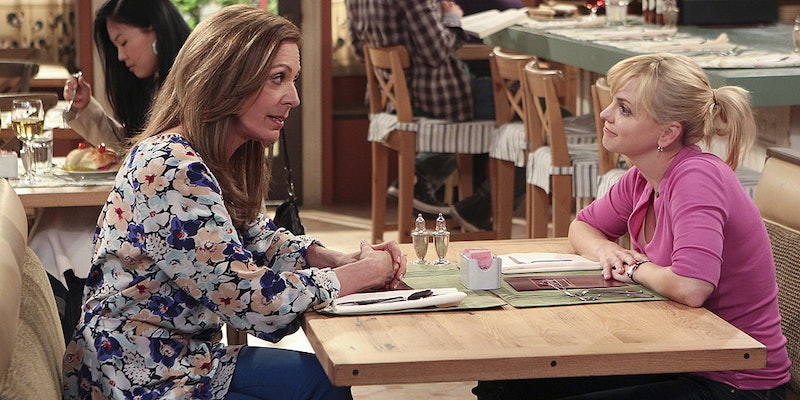 There weren't a ton of surprises during this year's Emmys. Modern Family continued its five-year winning streak in the Outstanding Comedy category with actor Ty Burrell taking home his very own Emmy in the Supporting Actor in a Comedy Series category. But while Modern Family seemed to rule the comedy game this year (as it does every year) there was one comedy win that came as a pleasant surprise. Allison Janney took home the Emmy for Supporting Actress in a Comedy Series for her new CBS sitcom Mom, which means that this little-discussed sitcom may finally get the attention it deserves.

And it does deserve it. Though Mom has already been renewed for a Season 2, the freshman sitcom has stayed bizarrely under the radar. That's a shame, because the show — which is produced by sitcom hit maker Chuck Lorre — has a lot going for it. The multi-cam sitcom stars Anna Faris as Christy, a recovering alcoholic and mother of two whose life gets complicated by the return of the mother Bonnie (Janney) whom she blames for the problems in her life. The two eventually find common ground and tackle life's struggles together, such as the teenage pregnancy of Christy's daughter, Violet, and Bonnie and Christy's commitment to staying sober.

Mom is a special — and absolutely hysterical — sitcom, and hopefully Janney's win will cause more viewers to tune in when it returns on Monday, Sept. 29. Here's why you should watch.

It's A Rare Sitcom About Women

At its core, the show is about women supporting one another and rebuilding relationships. It's one of the rare sitcoms where women are allowed to be loud, complicated, and a downright mess without falling into caricature. The three generations of women — Christy, Bonnie, and Violet (Sadie Calvano) — are unique, well-crafted characters whom the show never puts in a box.

It Tackles Recovery Without Mocking It

Alcohol and drug abuse is often the butt of jokes on sitcoms, which is why it's particularly refreshing to see a comedy that has made a choice not to engage in those kinds of stories. Christy and Bonnie's journey to recovery is never mocked, and the humor comes from how hard life can be when you can't rely on your old methods of coping.

The Supporting Cast Is Top-Notch

In the first season we saw Octavia Spencer as a white collar criminal and Justin Long as Christy's first boyfriend after starting AA. The show has a lot of fun with their guest stars, and hopefully we'll see even more big names in the second season.

It's Funny (And Surprisingly Raunchy For A CBS Sitcom)

Yes, the show is super feminist and everything, but it's also insanely funny. Faris and Janney are at their absolute best here, and can deliver a witty retort so well you'd think that they were both raised on sitcoms. Dirty jokes and innuendos take the saccharine out of the show.

Tune into Mom when it returns on Monday, Sept. 29 on CBS.

More like this
Simu Liu's First IG Post With His Rumored Girlfriend Includes Holiday Sweaters
By Stephanie Topacio Long
Theo James Revealed The Truth About His 'White Lotus' Nude Scene & Fans Can't Cope
By Stephanie Topacio Long
The ‘White Lotus’ Cowboy Theory May Spell Danger For Tanya
By Grace Wehniainen
The 'Kenan & Kel' Reunion On 'SNL' Took A Dramatic Turn, Thanks To Keke Palmer
By Brad Witter
Get Even More From Bustle — Sign Up For The Newsletter