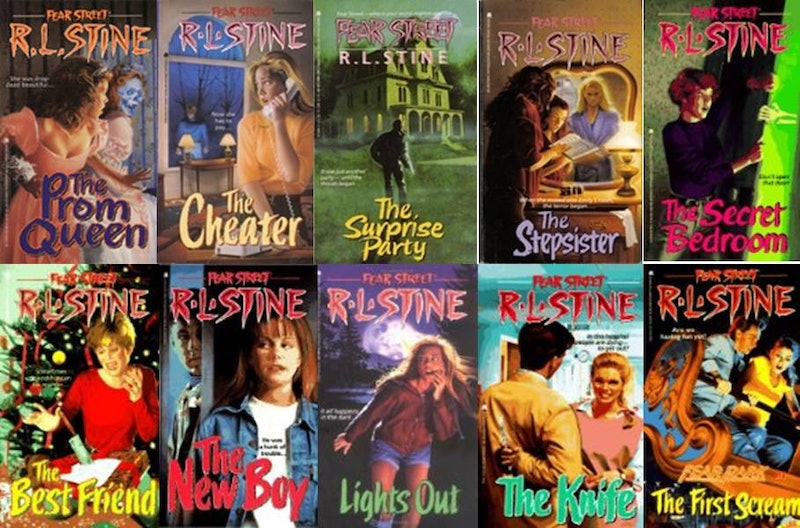 Just when you thought it was safe to go back to Shadyside, we learned on Twitter Tuesday that you can now pre-order R.L. Stine's brand-new Fear Street series book. Eek! We first heard the terrifying news last fall, but the day is finally here and no good-looking teenager is safe.

Party Games, the first new Fear Street book since 1999 — that's right, we have not gone to Shadyside in this entire millennium, so feel sorry for the youngsters — will be released September 30.

Stine's Fear Street series was the YA equivalent to his middle grade series Goosebumps. It was "sleep with the lights on" spooky, and occasionally just skewed the right amount toward silly. (Can I direct your attention to Cat ?) The series was a commercial smash, and now it has acquired a cult following from twenty- and thirtysomethings across the country. So basically, the launch of a new Fear Street book is music to an entire generation's ears — albeit probably that scary, doors creaking, Are You Afraid of the Dark? -type music.

The cover of Party Games should already have fans amped up.

Incredible double-meaning tagline? You bet. "Are you dying to play?" is a no-brainer here.

It's everything we could ask for. Add to that, the plot:

[Rachel Martin's] friends warn her not to go to Brendan Fear's birthday party at his family's estate on mysterious Fear Island.

Brendan Fear's birthday party on Fear Island? It's like Rachel has never even read these books before.

But it's not just Fear Street readers that have been waiting seemingly forever for the arrival of this book, so have the residents of Shadyside. So much has changed since the turn of the millennium, with so much potential for horror. Imagine introducing new technology into this world; it can only get worse for these teenagers.

Can't you just picture the whole new world this will open? Imagine these 2014-centered titles.

The Online Boyfriend by R.L. Stine

Emma thought the love of her life would come eventually, but as all of Shadyside starts coupling up, she's tired of waiting. Little does she know who's waiting for her on the other end of her iPhone swipes.

The Binge-Watch Party by R.L. Stine

Tagline: "Your Netflix will suck you in — forever"

It was a rainy Saturday in Shadyside, so Luke decides to invite everyone over to binge watch Orange Is the New Black. But there's a ghostly presence hypnotizing them from the Netflix screen, making sure no guest can ever leave the party again.

The Blackout by R.L. Stine

Tagline: "No iPhones, no way out"

A huge storm hits a Fourth of July barbecue on Fear Island, decimating its power supply. Frank sees that, after a day Instagraming party pics, his phone is only at an unlucky 13 percent. With no lights and no way of charging any iPhones, iPads, or Wi-Fi, things already seem bad. But it gets worse when they notice that someone is picking guests off, one by one.

The Superfan by R.L. Stine

Tagline: "She loves her to death"

Everyone loves world-famous superstar Beyoncé, especially Karen. Karen follows Beyoncé with every social media source she can and knows every word to every song. But when she starts practicing her signature hair toss and wearing sequined jumpsuits to match her idol, her friends worry that she's going just a bit too far. (Editor's note: This story is not biographical in nature to anyone in particular.)

No matter what Stine has in store for us with his new Fear Street books, we'll definitely be reading...with our flashlights.