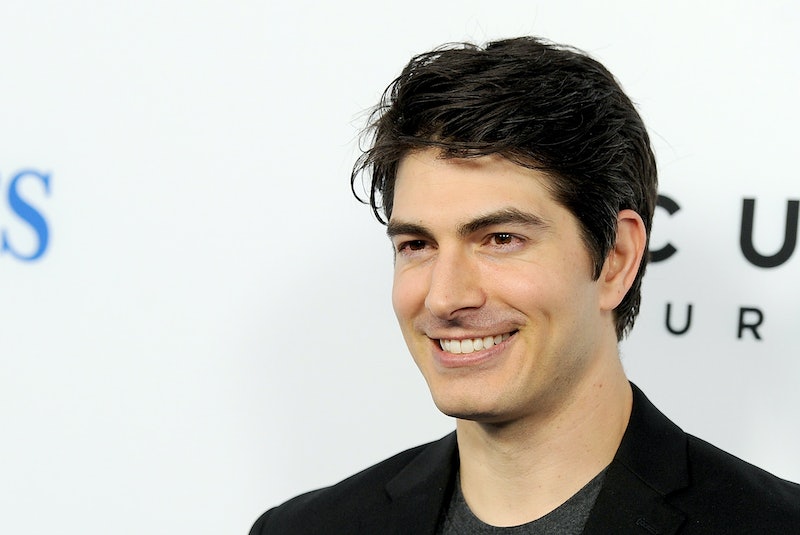 No stranger to DC superheroes, Superman Returns star Brandon Roth is joining Arrow's third season. Usually, new additions to a TV cast are shrouded in mystery (see: this season's additions to Scandal, Agents of S.H.I.E.L.D., etc.), but The CW told TV Line up front who Routh will be playing: Ray Palmer. If you're not up to date with your DC character alter egos, I can help you out — he'll be playing The Atom.

Who's The Atom? Well, according to the comics, Ray Palmer is a scientist who's studying matter compression. So, like shrinking and expanding stuff. One day, he and his girlfriend go out spelunking, there's a rock slide, and the two of them get trapped underneath the rubble. Palmer decides to use one of his science experiments on himself, and shrinks down small enough to crawl through the rocks and escape (don't worry, he goes back for his girlfriend, Jean). With this new found shape-altering ability, he does the only logical thing and decides to become a superhero.

His storyline on Arrow will mostly likely deviate from that. TV Line reports that he's entering the show as the new head of Queen Consolidated (we'll miss you, Isabel!), and I imagine he'll be met with open arms, since I doubt he's going to show up and try to kill everyone (we still miss you, Isabel!). However, he's bound to shake things up no matter what. Oliver's never been more ready to take over the company, if only to prove to everyone, once and for all, that he can handle it. But, can Ollie live with another attractive gentleman hanging around Felicity? Rumor has it that Routh will play a potential love interest for our favorite girl.

In saying this, though, his character is still a mystery. I doubt Arrow will make Palmer out to be a new bad guy for the season, since he's only ever been portrayed as a good guy — but that would be an awesome twist. Palmer's agenda for what he wants to do with Queen Consolidated's Applied Sciences Division is still tightly under wraps. It's not even a sure thing that he'll become The Atom during the season. Considering that Roy Harper has been around since Season 1 and still hasn't fully become Arrow's sidekick, Speedy, the show could easily take its time setting the character up. Hopefully he'll stick around for the entire season.

Palmer will probably develop the experiment that makes him shrink while working at Queen Consolidated, giving us a very nice introduction to the character. Doing that would also set up a very nice tension with Oliver. How do you think he'll feel knowing that his company isn't making earthquake machines anymore, but rather shrink rays? The last thing he needs is more trouble at QC.

It won't be too hard for Routh to slip right into the role of a crime-fighting vigilante. In addition to playing Superman in Bryan Singer's greatly disliked Superman Returns (honestly, I think I'm the only person out there who enjoyed that movie, which is why I was so excited to hear Routh was joining Arrow), he had a stint on Chuck as a good guy turned bad guy. Routh also popped up in Enlisted before it was rudely canceled by FOX. Hopefully his portrayal of Palmer gets him a standing invitation to the Arrowcave.