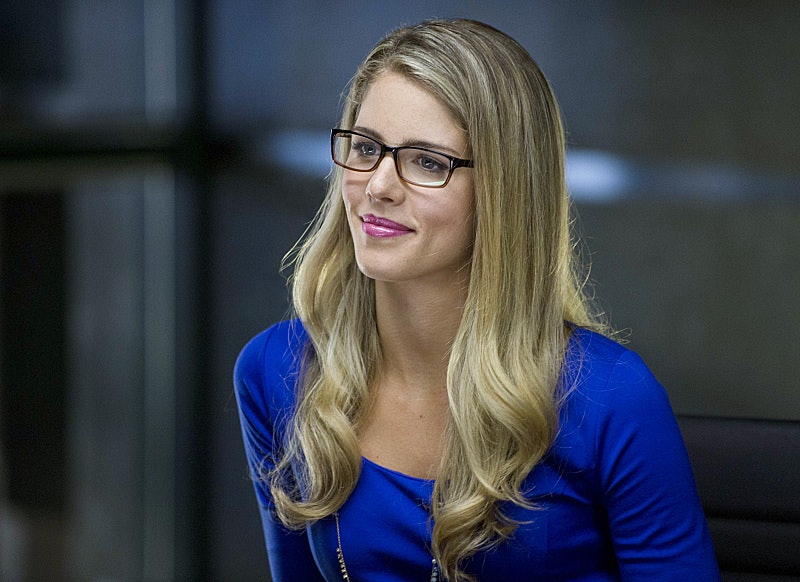 We still have quite a ways to go before Arrow ’s third season (and Stephen Amell’s abs) grace our television screens once more, but something tells me it’s definitely going to be worth the wait — and not just because of an Olicity courtship. Over the past two seasons we’ve learned all about Oliver’s perilous adventures after being shipped wrecked on a mysterious island (which I’m still not totally convinced isn’t the same one from Lost). However, it seems Mr. Queen isn’t the only Arrow character with a secretive past. Starling City’s resident computer geek extraordinaire Felicity Smoak has a few skeletons in her closet as well, and we're finally going to get to learn about them.

Executive producer Marc Guggenheim recently divulged that fans will get an extensive look into Felicity’s backstory — including her time spent at MIT — during Season 3’s fifth episode titled “Oracle.”

As if that wasn’t enough, Charlotte Ross has been cast to play Felicity’s mother, though it has yet to be revealed if her appearance will remain strictly in flashback form only or if it will also include scenes from the present day. Personally, I’m hoping for both. Now that an Oliver and Felicity romance is well underway, wouldn’t it make sense to introduce him to her family? I mean, who wouldn’t want to bring this guy home to their mother?

Uh, where was I? Oh right, Felicity! Of course, this subject raises a very important point: we really don’t know anything about Felicity's background. Like anything… at all. For being such an important part of Green Arrow’s team, she’s been suspiciously careful not to divulge too many details about her personal life. I'll admit, I'm intrigued. Clearly, there are a few juicy details to uncover. (After all, where there’s Smoak, there’s fire, right?) But no matter what, let’s hope at least these important questions finally get answered.

We know that her father abandoned her at a very young age. However, we don’t really know any details regarding how it all went down. Odds are it’s going to be a real tearjerker. Prepare yourselves accordingly.

How Does Vegas Felicity Differ From Starling City Felicity?

In Season 2’s “City of Blood” episode, Felicity let it slip that her mother is a cocktail waitress in Vegas, which is what pushed her to go to college and move as far away from that kind of life as possible.

So we can take that to mean she once lived in Las Vegas aka Sin City. Did she conform to the party-girl stereotype back then or was she just as lovably nerdy as she is now? I’m just saying, I wouldn’t say no to a few drunk Felicity scenes.

Where Did Her Love For Technology Come From?

Felicity is pretty much a full-out computer genius, and seems above average even for someone who went to MIT. So what exactly spawned her interest in that particular field? Was searching the web her means of escape once her dad left? Was it a hobby she picked up to mask her lack of popularity in school? I want to knowwww!!!!

Does She Have Any Former Flames?

So far, Felicity has only had eyes for Barry Allen and Oliver Queen on the show, but I’m sure Ms. Smoak has had one or two other romantic dalliances in the past. Clearly, we already know she has great taste in men (#TeamOlicity), so it’d be interesting to see the types of guys she was dating before making her way to Starling City. And if they just so happen to be shirtless, then so be it.