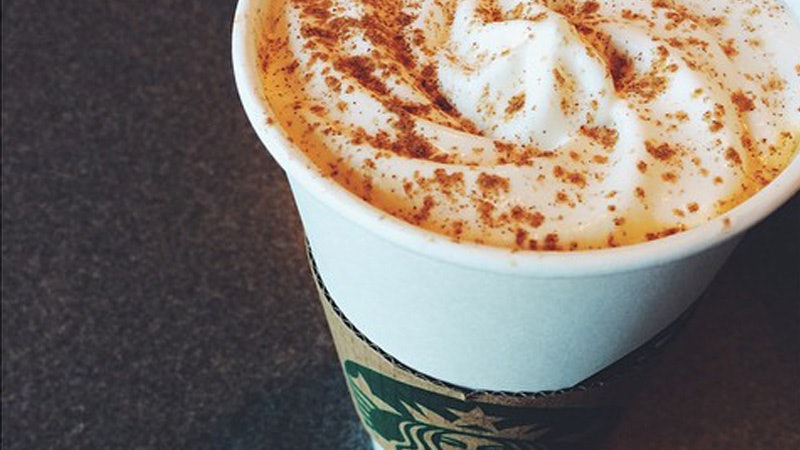 The annual Fall Pumpkin Frenzy for 2014 has officially begun! With both Dunkin' Donuts and Starbucks breaking out their pumpkin spice-flavored offerings before the leaves on the trees have even begun to turn, it’s kicking off earlier than ever this year — but in the midst of all that cinnamon-scented joy lies something a little darker: The question of exactly what is in a Starbucks Pumpkin Spice Latte. I mean, we already know there's no pumpkin; but beyond that, what the heck is in it? The answer, unfortunately, isn’t so pretty. (Although, if I’m being honest with myself, it probably won’t stop me from ordering at least one at some point during the next two months.)

Investigative food blogger Vani Hari, who runs Food Babe, is of the firm belief that we should know exactly what we’re putting into our bodies. This makes sense, hopefully for reasons I don’t have to explain. She realized, however, that although Starbucks lists the ingredients for the food items on its menu, it doesn’t for its primary offerings: The drinks. So she emailed them, asking for a complete list of ingredients for the Pumpkin Spice Latte.

The results were less than encouraging. First off, she was given the runaround in the worst way, with the responses from the customer service reps ranging from the vague:

“The Pumpkin Spice Latte is of pumpkin and traditional fall spice flavors combined with espresso and steamed milk, topped with whipped cream and pumpkin pie spice. If you ever have any questions or concerns in the future, please don’t hesitate to get in touch.”

To the absolutely useless:

“While we understand that some customers would like to know the nutrition information for their specific customized beverage, unfortunately we are unable to provide this level of detail for every beverage customization request. The beverage information that is available on Starbucks.com reflects the beverage offerings currently on our menu with the most common customization options.”

Now, I realize this is probably because customer service reps very rarely have access to this kind of detailed information; as such, the reps Hari emailed with likely gave her the canned “here’s the advertisement” and “we understand, but we can’t give you what you want” responses because they honestly don’t know.

But when Hari started to dig deeper, things got more troublesome: Depending on who she spoke to, she got different ingredients. First, she called customer service and asked whether the Pumpkin Sauce they sell in their store and the Pumpkin Sauce they use in the latte are the same. Customer service said yes; accordingly, Hari turned to the list of ingredients for the bottled sauce and saw that it contains high fructose corn syrup.

Meanwhile, an email response with the ingredient list for the sauce replaced high fructose corn syrup with “sweetened condensed nonfat milk.” When she asked about that, they seem to have confirmed that there’s HFCS in the condensed milk:

“Yes the sauce that we sell online at www.starbucks.com is that same sauce that we use in our stores. I understand your concerns about high fructose corn syrup being used in the Sweentened Condensed Nonfat Milk. Please be aware that product information is provided to us by the suppliers who manufacture food and beverage items for Starbucks Coffee Company. Variations may exist due to periodic changes in formulations. While we attempt to provide product information that is as complete as possible, product changes or new product introductions may cause this information to become outdated or incomplete. Products may vary from location to location.”

But then a PR rep for the company told her the condensed milk is sweetened with sugar, not HFCS. The mystery remains, but as far as Hari could determine, this is what’s in your average Pumpkin Spice Latte:

Starbucks was a little more forthcoming for Business Insider. When they got wind of Hari’s investigation and looked into it, spokeswoman Linda Mills told them that there’s no HFCS and no pumpkin in the drink; the flavoring mostly comes from the spices that typically go into a pumpkin pie: cinnamon, nutmeg, and cloves. She did, however, also confirm one of Hari’s concerns: Pumpkin Spice Lattes contain caramel coloring, which might be a potential cancer risk. The good news is that the company is apparently planning to get rid of caramel coloring in all their drinks. “We are actively looking at phasing out caramel coloring,” Mills wrote to BI in an email; she added, “In any instances where it is used in our beverages, the level is well below the No Significant Risk Level (NSRL) and safe to consume.” She also noted that Starbucks is currently working on getting updated recipes online.

Of course, that doesn’t do anything about the whopping 50 grams of sugar contained in a grande Pumpkin Spice Latte — but let’s face it: No one orders a PSL because they’re good for you. Luckily, though, we've got some options you can make right at home — and since you're brewing them up yourself, you know exactly what's in them. No more mystery syrup if you don't want it!

More like this
Dunkin’s Pumpkin Spice Latte Is Officially Back This Week
By Mia Mercado
I Tried The $20 TikTok Viral Oishii Strawberries — Here's What I Thought
By Sophie Hanson
Trust Me, Pickle Martinis Are The New It Drink Of The Season
By Emma Carey
The 8 Best Chew Bones For Puppies, According To A Vet
By Andrea Hannah
Get Even More From Bustle — Sign Up For The Newsletter