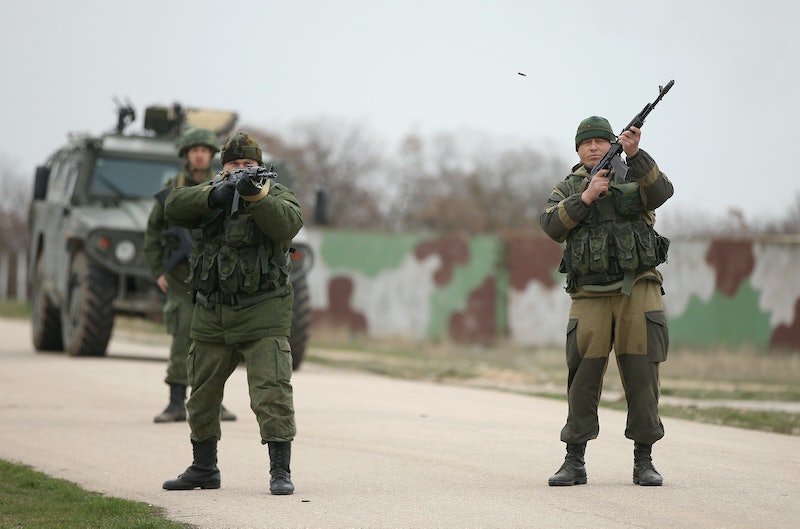 For Ukraine, the last year has seen a perpetual state of unrest. Violent protests broke out after former President Viktor Yanukovych rejected a trade deal with the EU in favor of signing with Russia, culminating in the largest revolution in Ukraine since the Orange Revolution of 2004. In the aftermath, Russian President Vladimir Putin annexed Ukraine's Crimea peninsula in March. Since the annexation, Russia and pro-Russian separatists in Ukraine have not eased up their presence in Ukraine, and on Thursday, current Ukrainian President Petro Poroshenko announced Russia has invaded Ukraine in a televised statement.

Poroshenko added that he plans to call for an emergency meeting with the U.N. Security Council. In his statement, he said:

Today, due to the deteriorating situation in the Southern Donetsk region in the area of Amvrosiiv and Starobeshiv, as a result of the deployment of Russian army units on Ukrainian territory, I have decided to cancel my official visit to Turkey. Seven bilateral meetings of great importance to Ukraine were planned, but at this moment the place for the Ukrainian president is here in Kiev. Today the Ukrainian National Security and Defense Council will meet to develop a plan of action in light of the worsening situation.

According to Ukrainian military officials, pro-Russian rebels backed by Russian tanks battled Ukrainian government forces near Donetsk and along the country's southern coast, roughly 12 miles from the Russian border, on Thursday. U.S. intelligence backs up the claim, suggesting that up to 1,000 Russian troops invaded southern Ukraine.

Ukraine's National Defense and Security Council said that the districts of Novoazovsk, Starobeshiv, and Amvrosiiv have all been seized by Russian and separatist troops. Seizing Novoazovsk could be an especially important strategic move since it is situated on the road that connects the Russian border to Russian-annexed Crimea.

It Comes On The Heels Of A Russia-Ukraine Meeting

Just two days ago, Poroshenko met with Putin at a summit in Minsk, Belarus, to address the tension between their two respective countries. According to Bloomberg, Poroshenko declared before the bilateral meeting:

Seems that Russia, who many have accused of creating "a new front" in Ukraine, has no plans to "exit with dignity" at the moment.