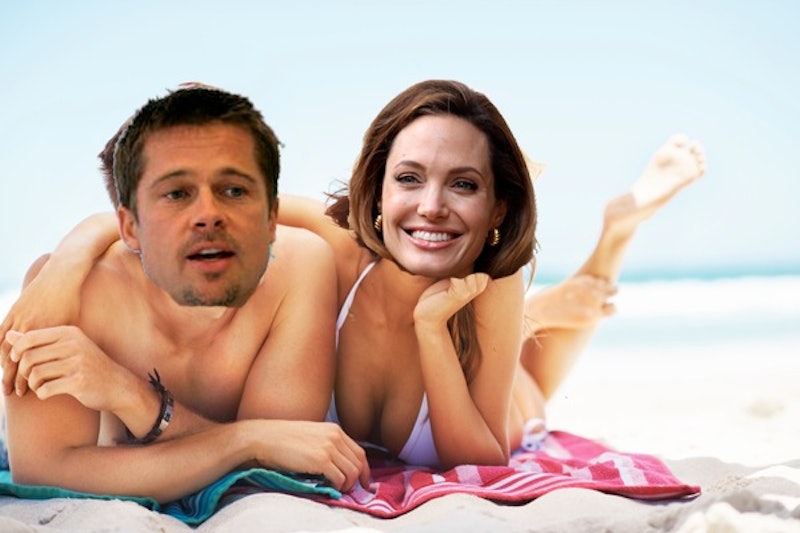 On the list of celebrity weddings I've been waiting my whole life for, Brad Pitt and Angelina Jolie's was pretty low on my list. It wasn't that I didn't want them to get married; it was more that their relationship and family is so perfect that it felt like they didn't need to get married to make it any stronger. Leave it to Pitt and Jolie to remind us why it's always better to expect the unexpected. On Saturday, Pitt and Jolie got married in a private wedding in France and they announced it Thursday morning to give the Internet a collective heart attack. It's been nine years since Pitt and Jolie met during Mr. and Mrs. Smith filming and now they're finally, awesomely married.

We probably won't get to see any wedding photos unless they decide to go on some sort of home movie–laden joint tour like Beyoncé and Jay Z, but the fact that it's been almost a week since they got married and this is the first time we're hearing about it gave me pause. Obviously, in that time Jolie and Pitt must have had time for the wedding, the reception, and some kind of honeymoon. Where would they have gone on their honeymoon? Well, I have no idea, but I can make some guesses about where they should have gone.

If you can't see Jolie and Pitt diving out of an airplane, then clearly you need to watch Mr. and Mrs. Smith again. Sure, the Smiths didn't dive out of any airplanes in that movie, but they probably would have. And Mr. and Mrs. Jolie-Pitt are just as adventurous as their on-screen counterparts.

If they want to get their death-defying stunts done on the ground, then Pitt and Jolie should try parkour. Parkour, or free running, basically just means running in a straight line over benches, jumping fences, hopping across rooftops, and so on and so forth. Now imagine them doing that all over Europe. Best honeymoon ever.

Everyone always goes somewhere warm and sunny for a honeymoon, so for a nice change of pace maybe Pitt and Jolie should go snowboarding. They could show off for each other and then cuddle up by the fireplace to warm themselves back up later. Totally romantic.

There are tons of incredibly long rivers around the world, so why not grab a kayak and some oars and go explore them the good old-fashioned way? It's like riding a his and hers bicycle except five times more scenic and a hundred times more likely to give us a chance to glimpse Pitt and Jolie winding their way down the Mississippi.

If they want to go somewhere by the water without getting too cliché, how about a scuba diving honeymoon? Nothing says "welcome to this new stage of your life" like exploring an underwater kingdom. Bonus romance points if Pitt finds a pearl in an oyster and gives it to Jolie. I'm sure her engagement ring is a lot more impressive than that, but just imagine.

Sometimes the oldies are the besties. Lounging on the beach for a few days is the most likely way that Jolie and Pitt spent their honeymoon. If they even had time for a honeymoon.

Considering how long they've been basically married, it's likely that Jolie and Pitt skipped the honeymoon thing entirely and have just been home sleeping since the ceremony. After all, they've both got movies and press tours and interviews and media scrutiny to deal with when they decide to get out of bed. Sleep is a luxury.