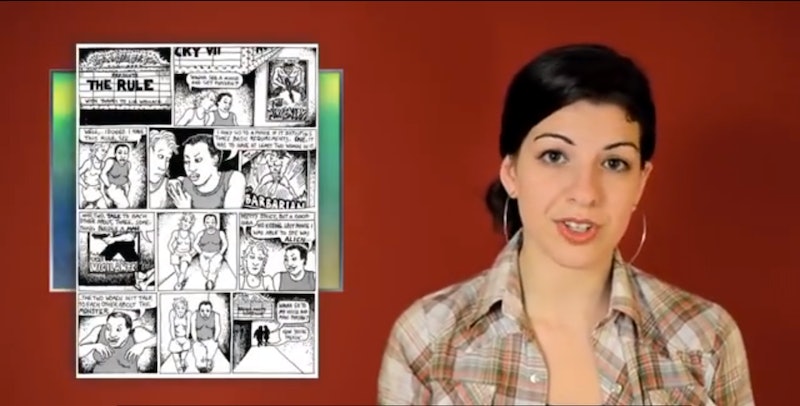 You might be familiar with the name Anita Sarkeesian. A feminist critic and video-maker, Sarkeesian has been in the headlines time and again — sometimes for her work, which examines sexism in video games and the media, but more often for the harassment she's received from people enraged that someone should point out the problems in the industry. This harassment reached a new low this week, when Sarkeesian had to leave her California home thanks to Twitter death threats she'd received.

The Consequences of Looking at Gender in Media

Since 2009, the 30-year-old Californian has been making videos that examine gender in pop culture and posting them — for free — on her popular website, Feminist Frequency. In 2012, she started a Kickstarter campaign to raise $6,000 in order to make a series of films, called Tropes Vs. Women, focusing specifically on women in video games. Within a few days, she had gone way beyond that goal. Today, she has over $158,900 from over 6,000 backers, including celebrities like Joss Whedon. This year, she won the Game Developers Choice Ambassador Award, in recognition for her insightful and necessary work.

But she's also drawn a lot of haters. So much so that her attacks also need a brief history: one of her first YouTube videos drew over 5,000 abusive comments, most of them personal, and, of course, sexual. Her Wikipedia page was vandalized, even going so far as to switch her bio picture for something you'd see on YouPorn. At one point, an online game was created where users could physically assault her, causing bruises and cuts to appear on her picture. Its name was "Beat Up Anita Sarkeesian," and you should never, ever look it up because it'll make you lose faith in humanity.

Oh, And It Gets Worse

About a month ago, one "critic" tried a different tactic: he made his own (aggressive) response video, called “Anita Sarkeesian – Busted,” in which he points out a potential problem with her analysis — and calls her a liar. This apparently inspired another wave of abuse and harassment (not that it had abated much in the first place). This week, Sarkeesian was so violently threatened on Twitter that she was forced to leave her home and call the police. (Reading the messages, you wonder why she didn't leave the state.)

What it comes down to is this: an intelligent woman uploaded an academic analysis of females as tropes in video games, and this caused such fury that one person created a specific Twitter account just to abuse her. This Twitter user sought out her home address, and her parents' home address. He said he would kill her parents, after telling her he would "drink your blood out of your cunt." Because she analyzed a video game.

Who Are These Trolls?

In response to a question from Mother Jones' Nina Liss-Schultz regarding why this abuse happens, Sarkeesian said that "some male gamers with a deep sense of entitlement are terrified of change." These guys "believe games should continue to cater exclusively to young heterosexual men with ever more extreme virtual power fantasies," she added. And they get violent when they feel this might be under threat.

Sarkeesian has dealt with it before, and she will deal with it again. She'll keep going. As she told the New Statesman:

I am certainly not the first woman to suffer this kind of harassment and sadly, I won’t be the last. But I’d just like to reiterate that this is not a trivial issue. It can not and should not be brushed off by saying, “oh well that’s YouTube for you“, “trolls will be trolls” or “it’s to be expected on the internet”. These are serious threats of violence, harassment and slander across many online platforms meant to intimidate and silence. And its not okay. Again, don't worry, this harassment will never stop me from making my videos! Thank you for all your support!

All I know? Pointing out sexism in video games is incredibly brave. But it shouldn't be. It really, really shouldn't be.

More like this
MOBO Awards Found Kanya King On The Woman Whose Grit & Determination Spur Her On
By Kanya King
Here's How To Support Jewish People Amid Rising Antisemitism
By Hannah Orenstein
Amanda Gorman Shared A Powerful Message On Meghan Markle’s Penultimate Podcast
By Darshita Goyal
What Does “The Rizz” Mean On TikTok? The Viral Slang Term, Explained
By Alexis Morillo
Get Even More From Bustle — Sign Up For The Newsletter