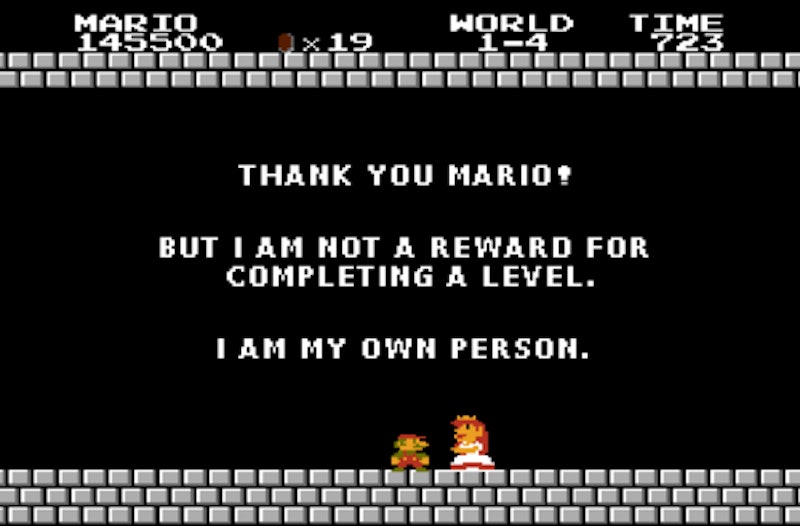 I have been a gamer ever since I first got my hands on my first Gameboy and a Pokémon red cartridge as a little girl. As I burned through one Pokémon play-through after another, in various generations (Red, Yellow, Silver, etc.), I always named my avatar something feminine: Mia, Liza, Anna, Lena. Once, in an instance I'll never forget, my cousin and I traded games to take a look at each other's Pokémon teams.

"Why did you name yourself Lena?" he asked, while scrolling through my Pokédex records. "This is a boy. Didn't you look at him? You can only play as a boy."

I am still a huge fan of games, and I am still disappointed in the amount of sexism inherent in the titles that are coming out, from AAA games to indie darlings. And I'm not the only one who feels that way: This week John Keilman, a Chicago Tribune writer, wrote about the bad attitude towards female gamers, as well as the lack of female protagonists. He points to Metroid's Samus and Tomb Raider's Lara Croft as some of the only examples of well-developed female protagonists (and we're not talking well-developed-in-the-chest-department way, which is almost always the case, but well-developed in the this-character-is-more-than-a-walking-pair-of-boobs way).

Keilman spoke to female gamers like Jasmin Tomlins, who said, "It's rare to see a female character who is not created as a love interest or someone who needs saving. They're usually something that doesn't really contribute to progression of the plot. A lot of times they're unplayable." Another common issue is that female characters just get ignored entirely, as in Ubisoft's latest Assassin's Creed title, in which there will be no female protagonists because "it would have doubled the work on [development].”

Although there's plenty of chatter out there regarding sexism in gaming, Keilman's article reminded me why it's still important to talk about it. So did an extremely disturbing piece by Polygon's Brianna Wu about the horrific backlash faced by women who game. Some examples of slurs directed at women, as noted by the case studies in her article, are below.

In response to a Tumblr post reblogged by popular vlogger Anita Sarkeesian:

"You'll know when I rape your mouth hole, bitch!"

In response to a PAX (Penny Arcade Expo) Girlfight panel, which focused on women in gaming:

"I thought they would put some fucking hot girls up there to fucking look at. AM I RIGHT?"

A comment by an AAA game developer (who is male):

"When a woman criticizes me, it goes to a different part of my brain than when a man on my team does."

I can think of few Internet subcultures that perpetuate this kind of unrestrained vitriol. This gender dynamic glorifies one kind of woman — the helpless, svelte, sexy kind — while vilifying women who are independent and intelligent. It is important to realize that the former kind of woman is fictional. Real women like that are rare. That's why creating characters who run around in pasties and thongs on the battlefield — characters you can sleep with for trophies, in the case of The Witcher , which, surprise surprise, only has a male protagonist! — is harmful. (For some belly laughs, check out The Hawkeye Initiative, which inserts Hawkeye into the pictures — and outfits — of scantily-clad female characters.)

This is Ivy, from Soul Calibur, and her...nipple coverings. I can't think of a better word for those.

This is not to say that good female characters don't exist, or that women need female characters to play a game in the first place. Games like Mass Effect, Dragon Age, and Portal offer fully-realized characters. Furthermore, not every game needs both male and female protagonists. In games like Bioshock: Infinite, the character journey happens to be centered on a person with a specific back story, and that person — Booker DeWitt — happens to be male. That's OK. But neglecting to include portraits of real women, time and time again, is when problems arise.

Portal and Portal 2's Chell, a good example of a female character whose sexuality or appearance is not the main focus of the games.

To get more perspective on the issue, I turned to some of my friends for their thoughts.

It's time for the gaming industry, and gaming culture as a whole, to face the reality of sexism within the majority of games available on the market. (This is not an indictment of all male gamers, or even those who do espouse these opinions — it's likely that much of the sexism is a result of ignorance and miseducation, rather than intention.) Some companies are making strides: I can finally play as a female on Pokemon games, if I want. And even if the gaming world isn't getting it, the toy-making world certainly is, with products like Miss Possible, IAmElemental, and Lammily. But, if video games are to be accepted as a legitimate form of storytelling — just like films and books — they must do a better job at reflecting reality.