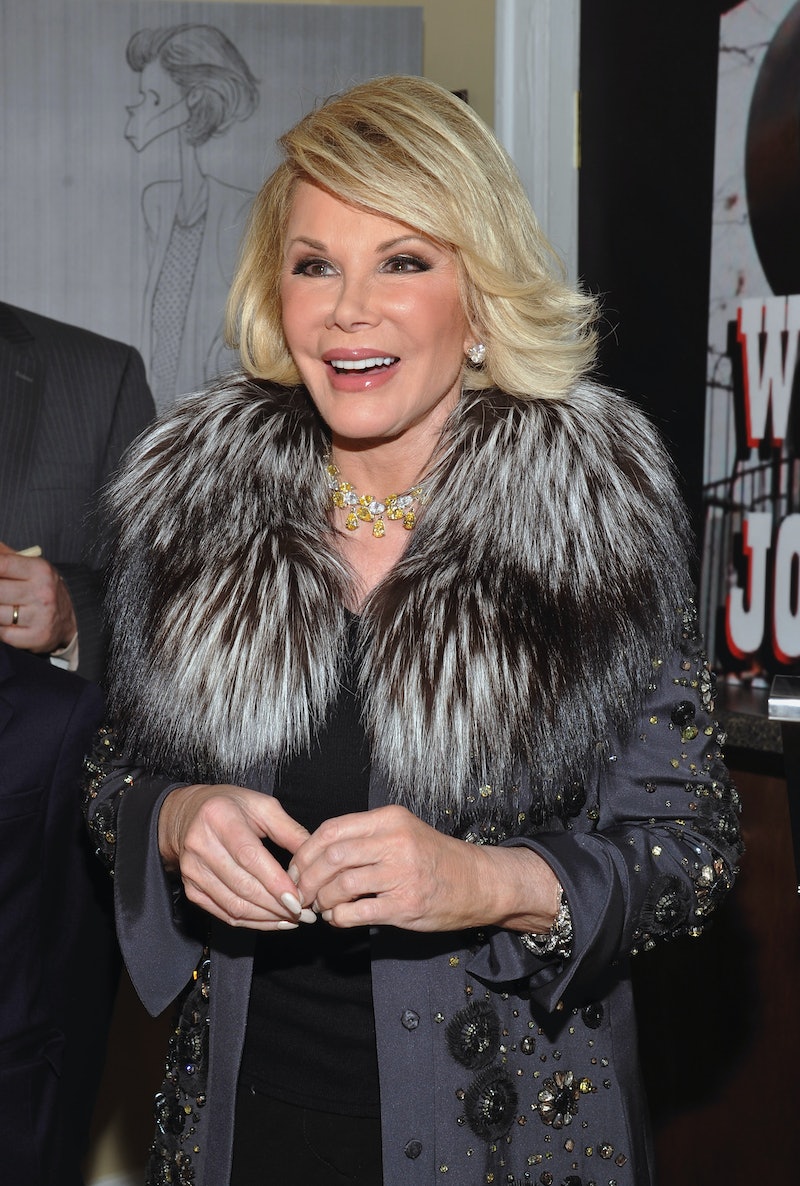 From top A-listers to lowly reality TV stars, Joan Rivers' no holds barred approach to tearing certain celebrity fashion missteps a new one was fearless, and usually, beyond funny. No one could lay into an all-denim pantsuit or rip apart a dress made of neon pink feathers quite like Joan could. As you have no doubt heard, Joan Rivers died on Thursday, but her career (and her epic and hilarious disses) will always be remembered. The 81-year-old comedienne has been making us laugh since the 1960s, when she first got attention for her standup routine on the The Tonight Show with Johnny Carson, and then later when her red carpet coverage in the '90s quickly gained popularity due to her biting wit and unrelenting opinions sharp enough to make any Oscar winner cry.

Lately, she had been ruling as the Chief of E!'s Fashion Police alongside Giuliana Rancic, Kelly Osbourne, and George Kotsiopoulos, where she sadly made her last appearance on the show covering the sartorial ups and downs of a back-to-back award show weekend, with the MTV Video Music Awards on Aug. 24 and the Emmys on Aug. 25. Needless to say, there were plenty of outfits for Rivers to praise, and a few for her to give them the hilarious criticism they deserved. Did Amber Rose really think she'd get away with that "dress" she rolled up to the VMAs in? Rivers shut her down with a classic one-liner.

"Amber's outfit is almost as tacky as Amber's seat was when she got up at the end of the show," she riffed to Giuliana, who served up some trademark Rancic mock-shock in response. (Come on, girl! We all know you agree!)

She also chit-chatted with special guest and VMA performer Jessie J, getting into it about Nicki Minaj's on-stage wardrobe malfunction, and had a super cute bonding moment when she realized the vintage Halston gown Jessie J wore on the red carpet was the same one she herself owned way, way back in the day (aw!).

Of course Rivers really came into her own when they all played a game of "Spit It Out" in response to various Emmy Awards ensembles. Rivers' response to Keke Palmer's gorgeous, side-boob ridden mermaid gown? "I've not seen cups this empty since I did shots with Dina Lohan." SLAY JOAN, SLAY.

Next up under the Rivers microscope was Orange Is the New Black's Taryn Manning, whose dress she bestowed with not one, but two zingers. She introduced her with, "First of all that dress has more creases than my face did before Botox," and rounded out the critique with, "Check the hem, because her dress is just like Jackie Chan's penis: it needs two more inches."

Anyone who can work a Jackie Chan penis joke into an Emmy gown fashion critique is someone the Earth needs a hell of a lot more of, which just makes her passing all the more heartbreaking. Joan Rivers has had her fair share of scandals and probably pissed off more people during an hour-long TV show than most will in a lifetime, but there's no denying that she was a woman to be reckoned with. A very funny woman to be reckoned with.