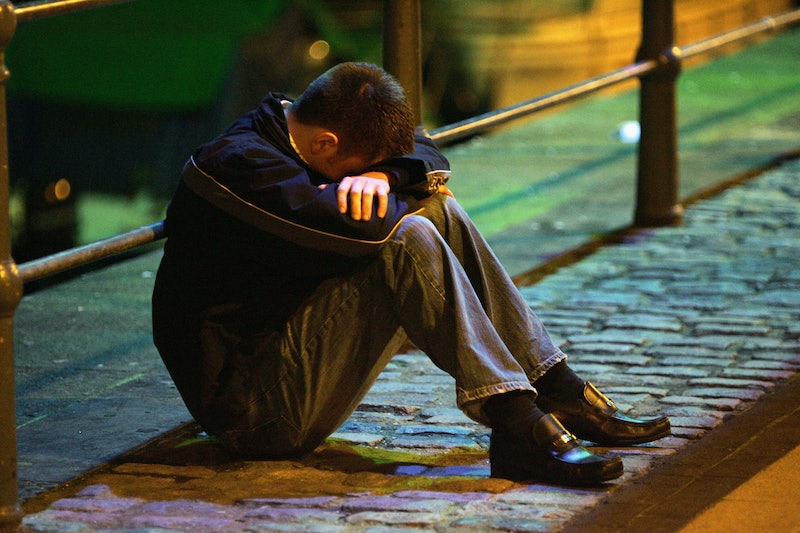 Drug and alcohol addiction is deeply entrenched in Western culture, as is the ongoing fight by legislators and advocates to extinguish it. In 2014, the U.S. will spend about $35 billion on substance abuse treatment, the Department of Health and Human Services predicts. For context, that's more than the entire economies of Iceland, Nicaragua, and Monaco combined. With evidence pointing to limitations in 12-step programs like Alcoholics Anonymous (AA) and it's many offshoots, perhaps it's time to adopt a new way of thinking about addiction and recovery.

"Recovery is a positive force that transforms individuals, families, and communities — but often it is a long and difficult journey," he wrote. "This month, we come together to spread its promise, and remind everyone struggling with substance use that a better life is possible."

In that spirit, here are seven cutting-edge methods for treating addiction. Substance abuse counselors of tomorrow, get inspired.

Initially branded as Naltrexone, a once-a-day pill, Vivitrol has technically been around since the 1980’s, though a new version — a monthly injection that blocks the brain's opioid receptors and stops people from getting high — is enjoying a late renaissance.

In 2010, the U.S. Food and Drug Administration (FDA) called the drug “a significant advancement in addiction treatment.” In August 2014, the Bangor Daily News wrote that Vivitrol is "slowly catching on in Maine and nationally as another alternative in the fight against the epidemic of opiate addiction." Likewise, advocates in Wisconsin, California, and Kentucky are launching recovery programs centered around the drug.

In an interview with Bustle, Debby Taylor, a senior VP and regional director at Phoenix House — a nonprofit drug and alcohol rehabilitation center that operates in nine states — was similarly optimistic.

“I have seen good results,” Taylor says. “It doesn’t take away withdrawal symptoms, but it helps manage them.”

A team of Stanford University professors say they've discovered a non-addictive painkiller that could prove indispensable in the fight to stymie overdose deaths.

"Finding a new pain medication is important because we need a safer drug; there are 17,000 deaths from prescription opiate overdoses [each] year," Daria Mochly-Rosen, a Stanford professor who discovered the compound, wrote in a press release.

Alda-1 has yet to hit the market, but its future looks promising. "Hopefully, this finding will translate into helping people who have inflammatory pain," Rosen said.

It sounds like that scene from A Clockwork Orange, but according to the science journal Behavioral Neurology, rTMS could change the future of addiction research and treatment. A non-invasive tool that uses magnetic pulses to modify activity in different areas of the brain, studies have shown that rTMS "can induce significant and long-lasting behavioural alterations, including reduction in craving and consumption of drugs of abuse." according to a January 2014 article from the peer-reviewed journal.

"In addiction, memories of drug use influence reactions to drug-related cues and motivate compulsive drug use," News Medical reports."What if one could change these dysfunctional memories? Although we all like to believe that our memories are reliable and permanent, it turns out that memories may indeed be plastic."

As research teams from McLean Hospital and the Massachusetts Institute of Technology (MIT) have discovered, memories can, indeed, be manipulated. Using rodents and xenon gas, the researchers were able to change "the emotional context of a memory," in this case, an electric foot shock. If the results can be replicated with humans, scientists believe they might be able to rewire devastating memories that provoke destructive behavior in addicts, as well as those suffering from depression and post-traumatic stress disorder.

Earlier this year, Swiss researchers published results from the first LSD study approved by the FDA in 40 years. Researchers at John Hopkins University, New York University, and Harvard Medical School are all engaged in similar studies. And while most of the research focuses on the effect of psychedelic drugs on depression, there's evidence to suggest they can also be a powerful tool in battling addiction.

In a 2012 paper published in the Journal of Psychopharmacology, Norwegian researchers wrote that "LSD had a significant beneficial effect on alcohol misuse." That same year, researchers at Yale reached a similar conclusion with alcohol addiction and ketamine.

According to the August 2014 edition of JAMA Internal Medicine, U.S. states that allow physicians to prescribe cannabis have 25 percent fewer prescription drug overdose deaths each year. Patients who use pot to treat pain instead of prescription opiates, they say, have a far less of a chance of becoming addicted to, and overdosing from, prescription painkillers. But could marijuana itself be used to treat more severe forms of addiction?

Debby Taylor from Phoenix House is unconvinced. If medical marijuana helps adults manage pain, great. But as a reason to use the drug, she remains skeptical.

“We certainly don’t believe that people should go to jail if they [smoke marijuana], or any drug for that matter,” she says. “But I have difficulty with the [legalization] argument. people say it’s no worse than alcohol, but that bar is pretty low, alcohol is one of the most harmful drugs that exist.”

For young adults, Taylor added, marijuana can alter both behavior and brain structure.

“Obviously, people can make up their own minds, but I’m skeptical,” she said. Still, some researchers are exploring using the drug to help manage withdrawal symptoms from more addictive drugs.

Ok, so this isn’t exactly a NEW treatment, but according to Taylor, clinicians are finally starting to recognize the significance of incorporating high-intensity aerobic exercise like spinning and swimming into recovery plans.

“Aerobic exercise puts a demand on the brain to produce, in access, endorphins, dopamine and seratonin at a higher level,” Taylor says. “It helps improve results tremendously ... and it’s free.”