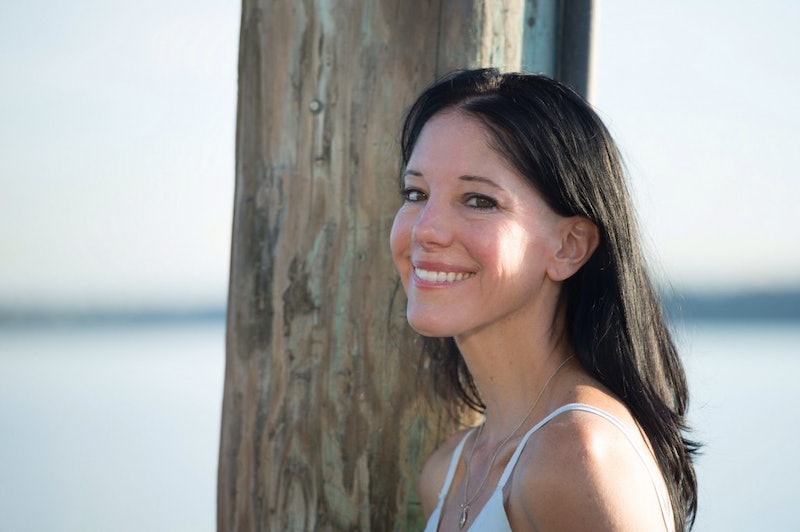 Jennifer Longo's debut novel Six Feet Over It is a completely unexpected story — in the best possible way. While Leigh and her sister Kai are visiting their grandparents, they receive in the mail two one-way tickets to inland California town Hangtown. Turns out, their father bought a cemetery and is moving the whole family away from their beloved coastal home and Leigh's best friend Emily.

As Leigh gets stuck working in the new family-owned business, she sinks deeper and deeper into this world of the dead and dying, pushing away connections with the "real world." But Leigh is no victim. She's sharp, witty, and she doesn't take a lot of nonsense, especially from her wacky father Wade and her barely existent mother Meredith, who is too busy mourning the ocean to spend time with her family.

Longo's young adult novel is truly unique and hard to categorize. It's hysterical and sad and realistic and completely out there, all at the same time. In particular, there are nine reasons it's truly a standout.

Again, this story is set in a cemetery! Or, according to Leigh's father, a "memorial park." When's the last time you read a YA novel set among gravestones that doesn't include vampires or mystical beings?

When Leigh's father Wade spontaneously and secretly buys this cemetery, Leigh is stuck selling gravestones to customers who have had loved ones just die. She hates this. The customers are divided into two categories: Pre-Need and At-Need. The pre-needs are generally the elderly or relatives of the elderly who are getting their wills and estates in order. But much worse are the at-needs, who have just had a tragedy, and come to Leigh for a place to bury someone close to them. As the at-needs sob across the desk, Leigh anxiously binges on York peppermint patties and shows them burial plots.

If this all sounds incredibly sad, it can be. But it's also insight into the people behind the business of death. The family has relationships with the coroner, the local florist, gravediggers, and other people in the same business. And it can also be truly funny, the goings-on behind the scenes. The difference between a casket and a coffin; why no one around funerals ever want to receive roses from their boyfriend or girlfriend. And, for example, Wade has taken to not wasting expensive granite headstones with misspellings by using them as a walkway into the house.

Like Wade, Longo's parents bought the town graveyard and put the kids to work in it. While she only spent a short time working in the office selling gravestones, as Leigh does, she has some insight into how it all goes down, which enhances the story.

3. Female Friendship is a Powerful Force

I can't reiterate enough the need for strong, healthy female friendships in YA. And Longo doesn't disappoint. Leigh's best friend Emily is seen entirely through flashbacks and allusions, but the author paints her and their relationship vividly. And her complicated, budding friendship with the daughter of the town florist, Elanor, is a major driving force of the novel. It's about how to build room for friends in your life, losing friends in several different ways, and the confusing nature of trying to create a connection with someone that you don't yet know. It's an honest portrayal of opening yourself up to friendships, eschewing for the most part mean girl stereotypes (save for the girls at school who bully Leigh for living in a graveyard, but that feels fairly honest) and rah-rah BBF girls.

4. It's Chock Full Of Literary References

When we meet Leigh she's reading Ovid's Metamorphoses for homework in the cemetery office, and the poetry echoes thought the rest of the story, appropriately.

Repressed grief suffocates, it rages within the breast and is forced to multiply its strength.

All things change. Nothing is extinguished.

It's not hard to see how these themes from Ovid can replay in present day in this setting.

Leigh calls her cemetery's gates The Manderleys as an homage to Daphne du Maurier's Rebecca. But that's not the only literary allusion, there are also whispers of Virginia Woolf's To The Lighthouse and Shakepeare's King Lear. It's hard not to get behind an author who can bring so many different kinds of literature together to tell her own kind of story.

5. The Story Weaves In Other Cultures

Leigh is born on el Dia de Los Muertos, the Mexican groundskeeper Dario tells her. And this makes her the patron saint of death. Through this reference, readers delve into the customs, traditions, and legends of the holiday, which only adds more layers to the story.

6. There Are No Love Triangles

Just when you think a romantic plot arc is going to become a romantic love triangle arc, Longo does something unexpected. Instead the story stays true to its focus on influential friendships, and that's so very refreshing. (OK, I may have said out loud while reading, "Just kiss him already!" so I might be part of the problem, but I loved and respected her choice nonetheless.)

7. The Family Dynamics Are Compelling

As much as the novel centers on friendship, it also has a lot to say about family. Leigh's parents are bizarre, sure, but Longo never rests on easy explanations and gives everyone in the book three dimensions.

And then there's her friend Emily's mom, whose motivations are unclear as the story begins to unravel. And Elanor's homeschooling, vegetarian parents are semi-helicopter parents, much to Leigh's jealousy, as hers don't tend to notice when she comes or goes. But it's never as simple as a grass-is-always-greener conclusion.

8. There's Cancer, But It's Not A Cancer Story

It wouldn't be a spoiler to say that Leigh's older sister Kai had cancer that nearly killed her. But instead of reliving the cancer from diagnosis to remission, Longo instead puts the sickness in the past, and instead focuses on how it reverberates and affects the whole family's life. Despite the simple conclusion, cancer in remission doesn't mean that everything is better or back to normal. Instead it quietly tears everyone apart, as Kai is allowed to live her life however she wants, as everyone feels guilt, and Leigh and her mom in particular, suffer the repercussions.

Again, Longo sets readers up with a tired plot device and twists it around to make it something far more honest and interesting.

9. You'll Feel All Kinds Of Feels

Death floats all around this novel, and as a result, the story is poignant and often philosophical. It talks about all the ways people mourn, for life, for the past, for something they haven't experienced. And how brushes with death, even those not your own, can affect your own actions, i.e. not wanting to get a license when you see how many teenagers' parents arrive at-need after car accidents. And Leigh becomes intent on figuring out what happens when we die, asking those who visit loved ones gravestones. It doesn't reach easy conclusions, because well, there are no easy conclusions with life and death, and that's what makes it so great.