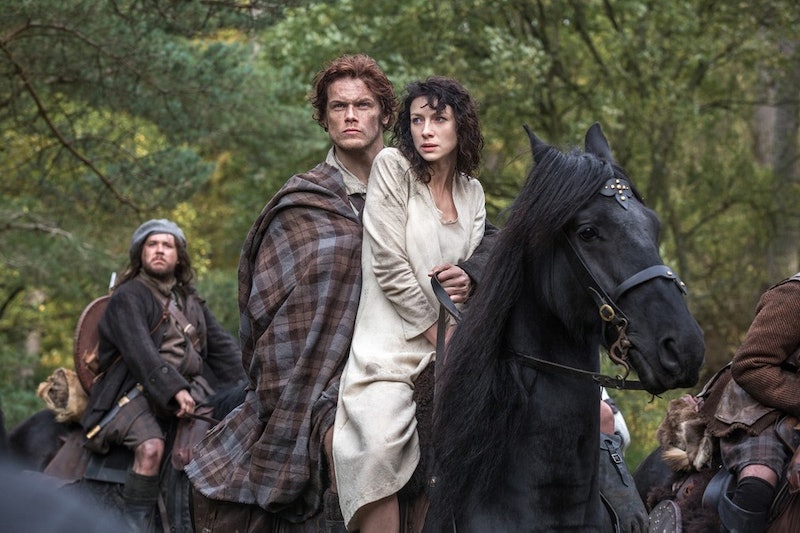 It was a long road from the publication of Diana Gabaldon's romantic sci-fi historical book Outlander in 1991 to its first onscreen incarnation in 2014. While fans of the book were excited to finally see the adventures of Claire Randall portrayed in the flesh, they were also understandably nervous about whether or not the adaptation would do their favorite book justice. The sixteen-episode series currently airing on Starz was created by Ronald D. Moore, most popularly known as the man behind Battlestar Galactica. While that show is widely considered a crowning achievement of science-fiction on television, it was a complete re-imagining and re-hauling of its source material, a 1978 TV series of the same name.

Some fans were concerned by Moore's involvement: Would he change Outlander as much as he changed Galactica? Those fans can now breathe a sigh of relief. In its first three episodes, the Starz series has been remarkably faithful to Gabaldon's words — no gender-swapping of characters, no darker tone, no addition of religious subtext... thus far, at least. And there's a pretty simple explanation for why Moore has been so uncharacteristically loyal to the source material this time around: according to Vulture, he was introduced to Outlander by his wife Terry Dresbach, a huge Gabaldon fan who refuses to allow him to mangle her favorite books. (She's also a costume designer on the show.)

So what is different? Not much, actually.

The first episode follows events of Gabaldon's book almost beat-for-beat. Moore doesn't even add any cool special effects for Claire's trip through time — as in the book, she simply likens the sensation to a car crash and then wakes up on the ground. The only major change is Outlander's opening scene. Instead of beginning in the midst of Claire's second honeymoon with her husband Frank, we're treated to a flashback only alluded to in the novels: Claire's work as a nurse during WWII. We see her as she treats a soldier's mangled leg and then watches the troops celebrate the end of the war. Another minor change is a sex scene where Frank goes down on Claire. This is an interesting addition because in the books, it's made explicit that Frank had never done that for her. But hooray for progressive depictions of female pleasure in pop culture!

A few more changes were evident in the show's second and third episodes. While the books take place entirely inside Claire's head, the TV version takes time to show us Frank searching for his missing wife and to provide us with flashbacks to their marriage — like when they were first separated by WWII. ("Claire Beauchamp Randall, promise you'll return to me." *swoon*) These help us see Claire and Frank as a real couple, which makes the love triangle more complicated.

The only significant plot point so far that was wholly invented for the TV show was Claire's collision with Father Bain over the treatment of a sick young boy. He thought the boy was possessed by demons, she thought he'd been poisoned by lily of the valley. Naturally, it turned out Claire was right and she managed to cure the boy with belladonna. While not taken from Gabaldon's words, this invention works wonderfully in increasing the tension between these two characters.

Three hours in, and it truly seems like Moore is committed to providing Outlander fans with a remarkably faithful recreation of the novel. But the first season of Game Of Thrones was also remarkably faithful to George R.R. Martin's work, while subsequent seasons have begun departing more and more from the source material. Perhaps we'll start seeing more changes as Outlander goes on and enters its recently announced second season. At least we know Moore won't follow True Blood's example and start making up plots wholesale: it's already been revealed that Season 2 will follow the events of Dragonfly In Amber , the second book in the series. So rest easy, Outlander fans.

More like this
Yes, Joseph Quinn Is Actually Playing The Guitar In This Epic 'Stranger Things' Scene
By Alyssa Lapid
At 14, Jenny Han Wrote Rom-Coms About Her Friends & Fan Mail To Leo DiCaprio
By Alyssa Lapid
'The Summer I Turned Pretty' Book Ending Is An Emotional Rollercoaster
By K.W. Colyard
Florence Pugh & Zoe Kazan Have Teamed Up For A Major New Netflix Series
By Rachel Mantock
Get Even More From Bustle — Sign Up For The Newsletter