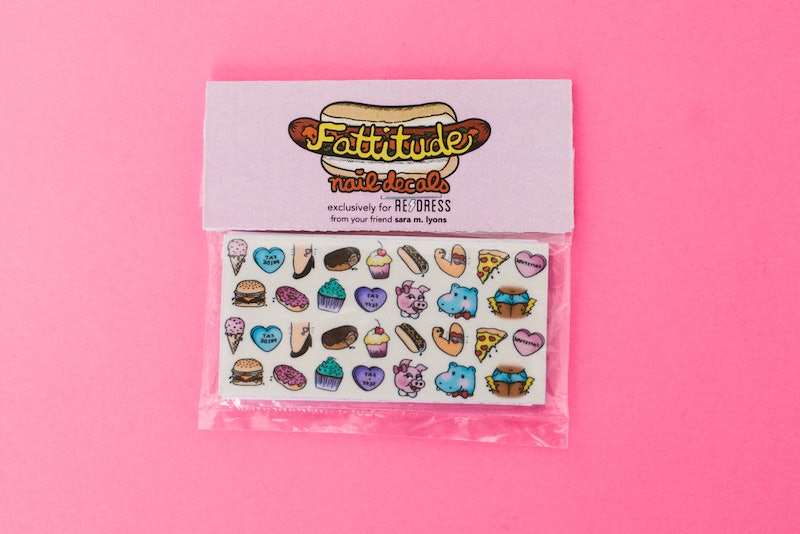 Anyone who has been fat at some point in their lifetimes has probably heard one (if not all) of the following:

Obviously there are a dozen things wrong with these statements, amongst them the basic fact that not all those who are fat have gotten to their present weights because of McDonalds or Burger King. Some, you know, have naturally slow metabolisms or Polycystic Ovaries or digestive abnormalities. And sure, some — like myself — simply love food, and don't wish to deprive themselves of a slice of delicious pizza (though I do lamentably also have PCOS). Either way, a person's weight really isn't anyone else's concern. It's an incredibly personal thing, and the fact that we feel the need to constantly comment and formulate opinions on the weight losses and gains of those around us is the root of a lot of sizeism.

But then there's the whole, "You can't be fat and sexy," thing. As a plus-size woman, I've been told many times, "You're not fat; you're beautiful," by friends and strangers alike. There's this notion that you can't be both, and it undoubtedly stems from society's prejudices against fat in general. But the thing is... it's a total lie. You can in fact be both, and, YES, your cankles and thunder thighs can actually be part of that beauty. Hell, they can be a big part of that beauty.

These are things I've thought about for years, and even more so now that size acceptance, fat pride and the idea of health at every size are gaining momentum. So when I was approached by Re/Dress NYC (the e-commerce site that provides a platform for independent designers and specializes in plus-size vintage and modern styles) regarding their "Fattitude" nail decals, the fat pride proponent in me couldn't resist checking them out.

Before my eyes were cheese burgers, cupcakes, chunky thighs with thunder bolts at their sides, cankles in kitten heels, a lady pig and a gallant hippo. The decals were adorable, yes. But they were also a monumental statement for self love, body acceptance and fattitude. Words and phrases used to bully the fat kid in school were embraced. The foods we're so often told to stay away from depicted lovingly. And the idea that fatness and beauty are not actually mutually exclusive celebrated.

I was instantly intrigued by the creators of this funny yet profound little product, and was lucky enough to chat with illustrator, designer and decal queen Sara M. Lyons and Re/Dress owner and proud plus-size babe Rachel Kacenjar, who worked together on the product.

In speaking to Lyons, I was actually pretty floored, and impressed, to learn that she is not a plus-size woman herself. Common to the fat pride movement are often men and women who are, well, fat. But personally, I love that she is not. "It's not about being fat or being thin or being 'normal' or 'healthy' (both loaded-ass terms I try to avoid when talking about body image)," said Lyons. "It's about pushing back against society's expectations about how women are 'supposed' to look, which is something I grapple with as much as anyone." Lyons is proof that size acceptance and body positivity aren't just about those who are bigger than what is considered acceptable. They are about — and for — everyone.

The nail decals themselves were a joint effort between Lyons and Kacenjar. While watching a VH1 throwback special a few years ago, Kacenjar came across a plus-size woman who pointed out how every fat, black woman on television tends to have an "over-exaggerated, sarcastic attitude," -- something she referred to as fattitude. When Kacenjar's brand manager Erin Thomas told her about some amazing Beyonce nail decals that Lyons had created, Kacenjar wanted the chance to team up. "I was so psyched that we had the chance to work with her, so I wanted to put one of my big 'important' ideas in her hands," says Kacenjar. "We ended up collaborating on a design of a hot dog with the word 'fattitude' written across it in mustard, and my heart was set a-flutter." And from a little hot dog came 16 unique and wonderfully positive designs.

Despite that the decals do have quite an inspirational theme to them, Lyons noted that she wanted to keep them "light-hearted and sweet." "I wanted people to look at the illustrations and see how themes that might feel more familar as put-downs could be reclaimed and become empowering." This desire is certainly one that fuels Lyons's work, as is evident from her "my thighs touch because they love each other" drawing, that has been inspiring women for months now. And again, it's just plain cool to see someone who does not identify as plus-size care so deeply about the cause.

When it comes to the future of body pos and fat pride movements, the gals have mixed feelings. "I do feel like society is starting to slowly shift toward body positivity in general, but the media is taking a bit longer," said Lyons. "I notice there has been more coverage of fat acceptance in the media recently, but it's still mostly framed as kind of a stop-and-gawk sensationalism thing, like, 'Look at these fat girls! Can you believe they aren't ashamed of themselves?!'" And to an extent, she's definitely right. A lot of fat pride coverage is often focused on absurdity and scandal and the dangers of "promoting obesity." But a lot isn't, like recent (and widespread) coverage on Tess Munster's gorgeous bikini selfie.

As for Kacenjar, she seems certain that things are already changing for the better. "I see kids writing blogs, fat people posting selfies (which I think is revolutionary! Fat vanity is powerful!) and using tumblr now and think it is so friggin' rad," she said. "I think we have light years to go before all bodies, colors, shapes, abilities and gender identities are fully accepted for what they are, but I also think that the internet has taken us from a slow cruise to light speed with this mission, and it is damn exciting." Damn exciting it is, indeed. And it's definitely quirky, fun and irrevocably ingenious people (and, in cases like these, their products) that make all the difference.

The Fattitude decals will hopefully be re-stocking soon. And the hope, of course, is that more body-pos products start hitting the market. Lyons's self-described pipe-dream, for instance, is to make toys. "I'd love to design vinyl dolls of gorgeous fat babes in incredible outfits," she said. But who knows? Maybe it's not a pipe dream. I'd definitely buy one, and judging from how quickly the Fattitude decals sold out, I bet others would too.

More like this
Berriez Founder Emma Zack On Her Size Inclusive NYFW Show
By Dominique Norman
The Best Plus-Size Looks From New York Fashion Week
By Dominique Norman
The 12 Best Strapless Bras That Won’t Slip & Fall Down
By Audrey Williams and BDG Commerce
Help! I'm Not Getting Any Attention On Dating Apps. What Can I Do?
By Sophia Benoit
Get Even More From Bustle — Sign Up For The Newsletter