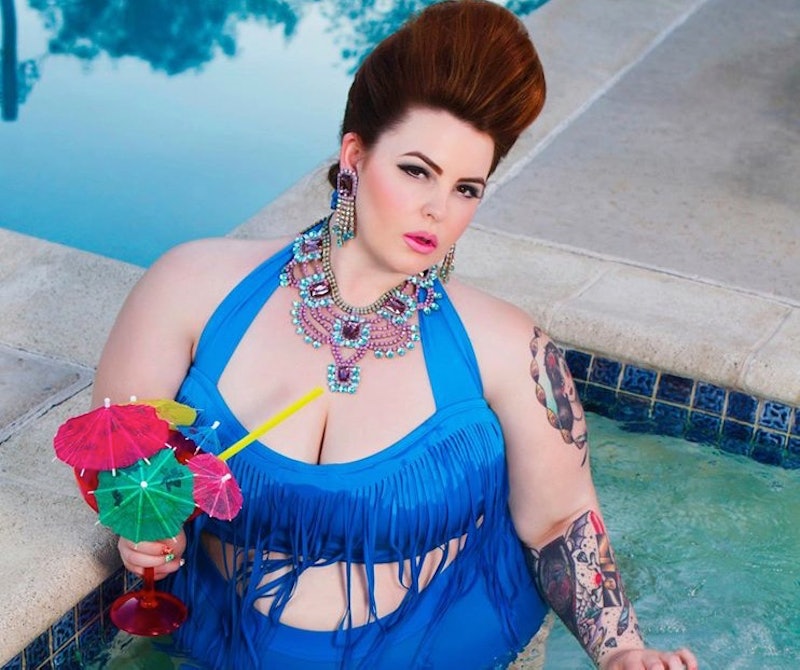 I didn't wear a bikini until I was 21-years-old, for which there were two reasons. Reason one: Throughout my childhood and adolescence, there simply weren't any bikinis in existence that simultaneously fit me and were even slightly to my taste. Reason two: Had I (as a fat kid or a chubby teenager) worn a bikini, it would have been social suicide. I still remember when a friend and fellow fattie made the "mistake" of wearing a two-piece to a slumber/pool party, and the delightful children of my sixth grade called her "muffin top Maggie" in that horribly derogatory way that school bullies do for years to come, even though she was gorgeous. Suffice it to say, wearing a bikini as a plus-size woman used to be incredibly taboo, and something avoided at all costs.

Two years ago, though, something wonderful happened. I stumbled upon the now legendary xoJane slideshow of "31 hot, sexy fat girls in skimpy swimwear" featuring Gabifresh and loads of other women whose bodies sort of looked like mine. And for the first time in my life, I felt a little more confident — and confident enough to get myself the cutest red and white polka dot bikini from ModCloth.

In the years since, the word "fatkini" has become part of the body pos dictionary. It's a hash tag. It's a staple in the plus-size blogger's wardrobe. And it's undoubtedly an empowering movement in self love and size acceptance. And two weeks ago when the all-around magical body pos activist and plus-size model Tess Munster posted some fatkini selfies along with an honest account of her personal body image journey, even more women joined in the fatkini fun.

My tummy is an area that I'm still learning to love — even though I appreciate everything it has done for me. It's round and covered in stretch marks from carrying my beautiful son in it. My fiancé loves it and constantly touches it and because of those reasons I recently decided to be kinder to it. With every other area of my body — learning to love it has been faking it until I actually accepted. The misconception about myself and many other fat/plus-size women is that we are this way because we don't care, that we have 'let ourselves go,' when in reality this is the best I've ever felt/looked... So today I am celebrating being able to swim with my son without worrying what others might say, and guess what? No one cared that my tummy was out... and it was glorious.

There are so many reasons why this is all brilliant, but in terms of the images themselves, what struck me most was the first selfie — the one in which Munster rests a hand on her tummy. As plus-size women, our stomachs are often the target of hate. We're told they (and we as a whole) won't be beautiful until they become flat, because obviously a belly with any sort of jiggle to it is blasphemous to all those who spend hours in the gym achieving the "perfect beach body."

That Munster shows love for her body, and especially her stomach, in these photos is sort of a huge deal. She's breaking all the "rules" of plus-size fashion and in the process, embracing a part of the body that has traditionally been the cause of a lot of self-hatred amongst those struggling with body image. As Adriana Velez of The Stir wrote after these fatkini selfies went live, "What if we decided to love even the parts of ourselves that don't conform to standards of beauty? We could change the world." I'm usually not that optimistic, but judging from the hundreds upon hundreds of women who've been taking to Instagram with the #fatkini selfies, maybe, just maybe, she's right.

Munster's statement is also incredibly profound because she points out that this — her plus-size self, with everything from its stretch marks to its other so-called imperfections — is the best she's ever looked or felt. As someone whose weight has fluctuated more than I could express, I can also confirm that my current self, with my 50-inch hips and cankles and all, is the best I've ever felt. Because feeling healthy — emotionally and physically — is often down to your own sense of self worth. Munster is beautiful, and anyone with half a brain would see that. But she's also bold in her admittance that although confidence is a nearly impossible thing to achieve, putting in the effort and getting to that point where you can take to the beach in a two-piece even if you're over a size-16 is beyond worth it.

Plus-size blogger Isha Reid of An Autumn's Grace said to me on the subject, "Tess Munster posting a picture of her gorgeous body went viral because she is a woman who doesn't fit the convention, but her confidence and inner and outer beauty radiate. She is proof that the beauty standards are outdated and she (and many others) are rewriting the rules." People will always hate on those who are different from the mainstream, but as Reid points out, it doesn't really matter. Because doing your own thing — learning to love your tummy and your stretch marks and all those things you're told to hate — will be inspirational to far, far more people.