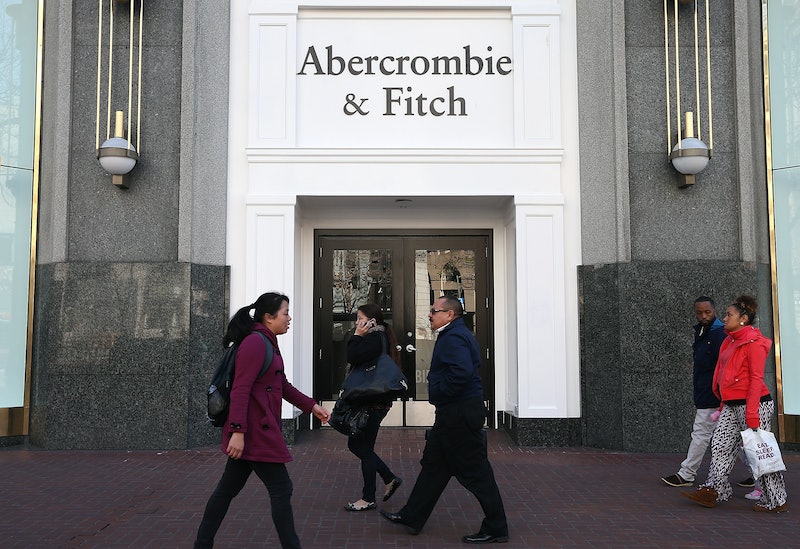 Yesterday BuzzFeed announced that Abercrombie and Fitch is dropping its adorable moose logo. It was quite the shock to see the news, and it made me think... what would other iconic brands of my generation look like without their well-known and highly-coveted symbols? As far as brand evolution and marketing techniques go, I initially wasn't sure if Abercrombie's decision to get rid of their logo was the best decision.

When I was in middle school (and even high school), there was definitely a positive stigma attached to wearing that famed moose. In retrospect, it simply meant that the people wearing them were willing to spend more money on a simple polo for the status, but when I heard the logo was changing, it made me stop and think how different fashion in youth is today.

It's now way more "in" to buy staples that can conform to whatever style that you prefer rather than to stock your wardrobe full of branded items from pre-stereotyped stores. Although I think that's actaully extremely cool and a positive transition for the younger generations, there's no denying that some items just wouldn't be the same without their logos. Louis Vuitton bags and Adidas sneakers? Below I tried to imagine the staples without their signature... but I'm not sure if they'll be as successful as A&F.

These signature logo hats would be quite different without "Supreme" written across the front in that classic white font. I have to admit though, these wouldn't be the worst without their logo.

Another polo-popular brand that might blend right in with Abercrombie with its eagle missing from the left hand side. They don't look bad without the logo, but they definitely don't stand out. Then again, that's what the kids want these days right?

This bag actually looks nice without all of the logos everywhere, and I'm definitely more likely to carry it without the flashy look.

Ok, Adidas would definitely struggle without their signature look. When the three stripes are missing, they look pretty basic — and not necessarily the good kind.

Sure drinks aren't as exciting, but what would your oh-so-Instagram-able beverage look like without it's iconic label mermaid? Pretty average, and definitely not as photogenic.

Signature nike running shorts aren't actually that different without their logo, and this makes them seem even sillier when compared to the millions of (way cheaper) knock-offs out there.

While Louis Vuitton looks more chic without the initals, I think Coach looks like standard beach bag tote without its many "c" stitches. I think Coach is a brand, like Adidas, Nike, and American Eagle, that's seriously lacking unique style without its branding.