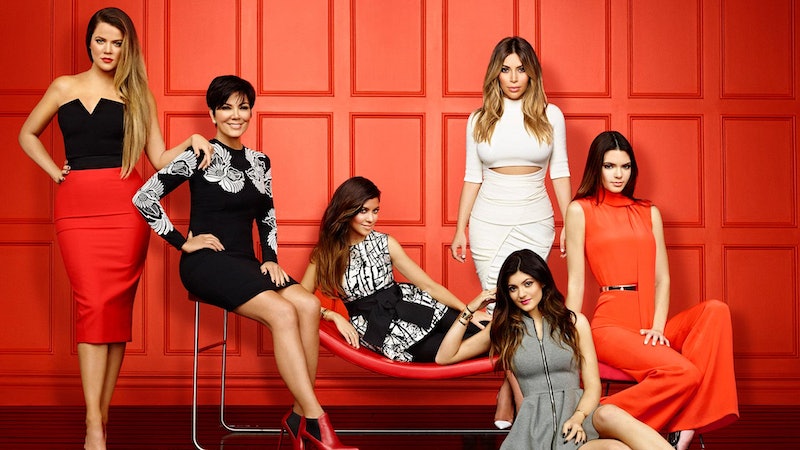 It all happened so fast. It was Thursday night, I was tired and bored, and I'd plopped on the couch with my laptop nearby. I flipped through my Netflix queue for a show to mindlessly watch, but nothing felt right; Parks & Rec was too loud, Breaking Bad too heavy, Grey's Anatomy too familiar. So I left Netflix, went elsewhere, and stumbled upon the season nine premiere of Keeping Up With the Kardashians . At first, I nearly exited the page; I'd never seen an episode of the show, or most reality TV, as it all looked idiotic. Yet something about it piqued my curiosity, and I hesitated. Should I finally see what all the fuss was about? It'd kill a few brain cells, but what the hell. I was in need of a series to watch, and here one was, right in front of me. Before I could stop myself, I Klicked.

Four hours later, I was done. My eyes blurry and my mind aching, I closed the laptop, even walking away so I wouldn't "accidentally" click next on just one more episode. It would still be a while before I could process what'd just happened, but even then, I knew one thing for sure: Whatever that was, whatever I'd watched, it was the best thing I'd ever seen.

It's not that my initial impression of the show was wrong, because far from it; KUWTK is one of the most idiotic series to ever grace TV. The "conflicts" are ridiculous, the lines rehearsed, the general concept too mind-blowingly awful to even contemplate. But it's also amazing, in a can't-look-away-from-the-car-crash kind of way, except the car crash is Bruce Jenner's hair and the force is my total lack of self control.

Where to even start? As an entertainment writer, I was already familiar with the basics of the show — the names of the family, their general personalities, the public obsession with a guy who may or may not be a Lord. Past that, though, I had no idea what to expect. Would it be the Kim-and-Kanye show, with random appearances by her family members? Would Kendall and Kylie be crazy and weird, having grown up in a home filled with cameras? Would Scott Disick really be as funny as all those GIFs on Tumblr seem to imply?

To my incredible disbelief, KUWTK was all that, and more. All four episodes that I watched contained more insanity than anything I could've imagined from just reading about the family on TMZ. There was Kris, performing "All That Jazz" in the hopes of being a Broadway star, despite having absolutely no talent; Kourtney, stalking Scott all the way to Las Vegas like it was a totally normal thing to do; Kendall, skulking around in silence only to burst out in obscenities or eat her daily meal of three M&Ms. And don't get me started on Kim, who spent all four episodes complaining about how hard it was to be a mom while never, ever being in the same room as her child, or Khloe, whose ability to run a clothing store seems to consist of brushing her hair and nodding at a piece of paper. These people are awful.

But I couldn't stop watching. Even now, I'm already planning to catch another episode or two after work. I'll probably go through the full season in a couple of days, and then watch a few earlier episodes to catch up. Eventually, I'd like to have the whole nine-season series under my belt, but that requires a sort of determined willpower that I'd like to think I don't have.

For now, though, I can finally say that I understand. I get it. I may not get why I get it, but I do. The pull of the Kardashians is real; watching them wander around their mansions, yelling in each other's faces and — thanks to Scott, sometimes literally — counting all the money they've made, is addictive and unstoppable. I may not want to hear Khloe and Kourtney discussing the proper age to stop breastfeeding (spoiler: it's not 9), but I need to hear it, same as I can't look away whenever Kris does something massively inappropriate, like reminisce over her daughter's sex tape, no matter how much I may want to. Like so many others, I'm hooked on the craziness of the Kardashians.

And to those I once ridiculed for loving this show like it's Game of Thrones, I say: I'm sorry. I didn't understand. And yes, maybe I was better off staying far away from this series, but now that I've watched it, there's no going back. Like Kim and her sisters, on the way to San Francisco even though they're in a fight. Or Bruce and his beach house, for which he just renewed the lease even though Kris is not happy. Oh, no, what have I done . . .

More like this
This Hilarious ‘KUWTK’-Meets-‘Camp Rock 2’ TikTok Is Kardashian-Approved
By Stephanie Topacio Long
Everything To Know About The HBO Max & Discovery+ Streaming Service Merger
By Brad Witter
Lea Michele Explains Why She's Never Watched 'Glee's Cory Monteith Tribute Episode
By Jake Viswanath
What’s New On Netflix: 'Bridget Jones’s Diary' & 'Monster-in-Law'
By Arya Roshanian
Get Even More From Bustle — Sign Up For The Newsletter