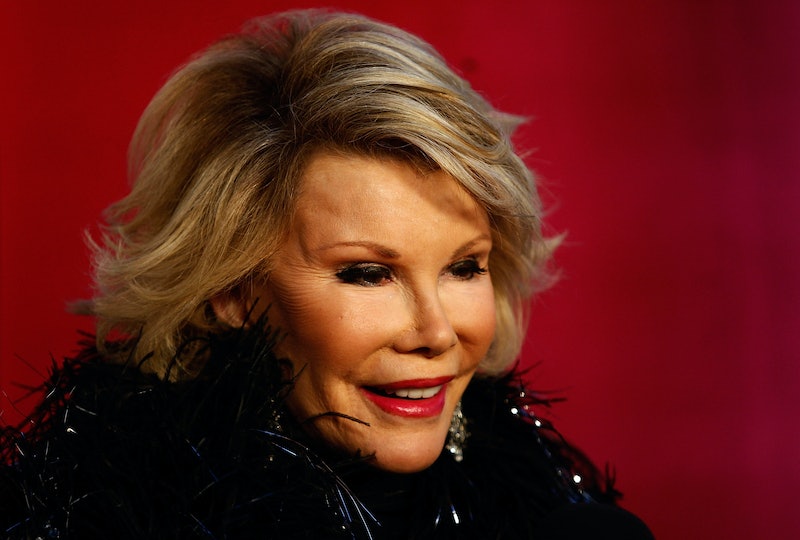 A day after Joan Rivers' sudden hospitalization for complications from throat surgery, the comedian's daughter Melissa Rivers has released a second statement about her 81-year-old mother's health, saying that "her condition remains serious."

"My mother would be so touched by the tributes and prayers that we have received from around the world," Melissa told E! News. "Her condition remains serious but she is receiving the best treatment and care possible. We ask that you continue to keep her in your thoughts as we pray for her recovery."

According to reports, Joan is currently in a medically-induced coma at New York City's Mt. Sinai Hospital after she stopped breathing during a minor throat procedure on Thursday. Originally in critical condition, she was upgraded to stable later in the day, at which time Melissa released her first statement, in which she thanked her mother's fans for "their outpouring of love and support."

Many of Joan's Fashion Police colleagues and comedian friends have expressed their hope for the ailing host to recover, from her protégé Billy Eichner ("don't you dare die on us, Joan Rivers") to Live! With Kelly and Michael's Kelly Ripa ("praying for the great Joan Rivers, one of the true loves of my life"). E! News' own Ken Baker was the first to update the public on Rivers after she entered the hospital, tweeting Thursday afternoon that "our own lovely living legend Joan Rivers is in stable condition."

As for the legendary comedian's timeline of recovery, nothing is yet known; serious condition may be an upgrade from critical, but the respiratory arrest she was reportedly in after her surgery could potentially have lasting effects. Hopefully, she'll be back on the E! red carpet before long, bonding with celebrities and asking "who wore it best?" in her beloved, trademark Joan Rivers way.