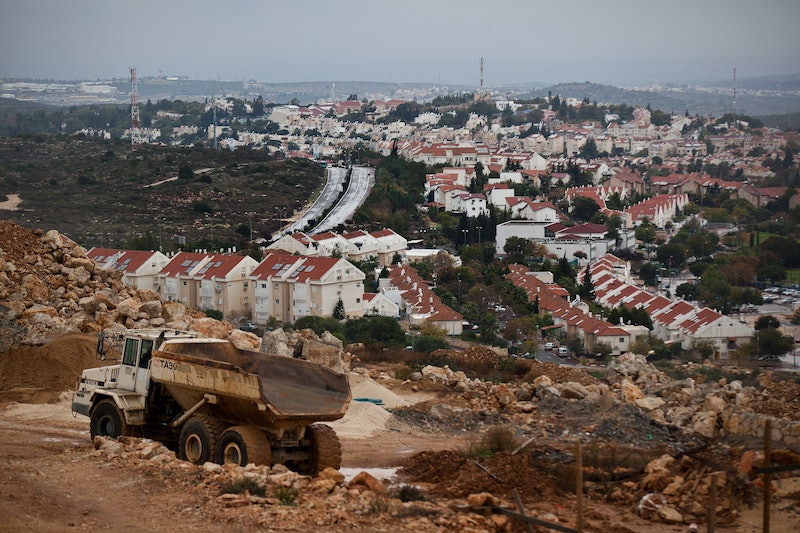 Things have been tense all across the Middle East lately, that's been plain to see, and it's capturing a huge amount of attention. And Sunday's news out of the West Bank is no exception — according to the BBC, Israel is taking over new West Bank land, potentially for the creation of a new settlement city called Gvaot. News of the plan has already sent some ripples throughout the international community, with the U.S. State Department calling Israel's decision to expand settlements "counterproductive," according to VOA News, and urging Israeli officials to reverse course on the plan.

To their end, the Israeli military has said that they're taking over the land in response to the murders of three kidnapped Isreali teenagers, who went missing in June, and whose deaths touched off the recent months of violence and bombings in Gaza. The seized land would amount to nearly 1,000 acres, according to the Washington Post, and would be located in what the Israelis call Gush Etzeon, an area to the west of Bethlehem, already featuring nine different settlements.

There's often a wide gulf between how Israeli settlements are viewed internationally, as compared to how they're viewed in by Israeli citizens and the United States. While the U.S. does often speak critically of Israeli expansion into Palestinian-controlled territories, as it has upon news of this recent plan, it generally provides support against international or legal condemnation of Israeli policies. The broader global community, by contrast, often regards such settlements as violations of international law, an opinion shared by the United Nations.

Prime Minister Benjamin Netanyahu has staunchly defended the practice of settlement expansion in the past, both to his public, and to the global community. At this moment in time, however, there's an understandably heightened air of tension surrounding Israel's latest plan — throughout the months of Israel's Operation Protective Edge, over 2,100 Palestinians have died, as well as 70 members of the Israeli military, according to Haaretz.

It goes without saying that settlement expansion is controversial internationally, but on the ground in Israel and Palestine, the issue cuts much closer to the bone. Proponents of a Palestinian state are, as the Washington Post details, concerned about keeping the West Bank under contiguous Palestinian control, not dicing it up to the point where a two-state solution would seem less viable.

The Washington Post also reports that while Netanyahu didn't specifically address the reports in his last cabinet meeting, he did reference the "building up" of Israel's communities — a subtle indication, if not a confirmation, that Israel intends to assert its rights to the land, regardless of American opposition.

Our hand has been extended in peace to those of our neighbors who want peace, and we have always fought vigorously, and with strength, against those who wish to destroy us, while building up our state, our cities and our communities.

Reportedly, the U.S. State Department isn't thrilled with the timing. According to Haaretz, a U.S. State official criticized the expansion, which would take over the villages of Husan, Jaba, Nahalin, Surif, and Wadi Fukin.

We have long made clear our opposition to continued settlement activity. This announcement, like every other settlement announcement Israel makes, planning step they approve and construction tender they issue is counterproductive to Israel's stated goal of a negotiated two-state solution with the Palestinians.