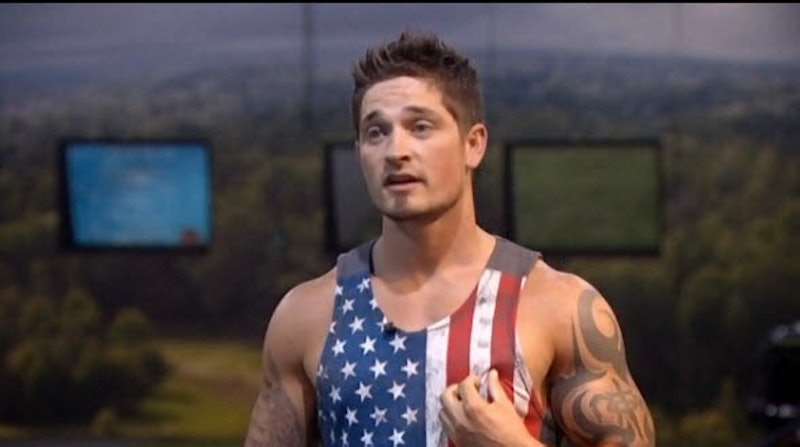 Evicted Big Brother houseguest Donny Thompson was constantly accused of being ex-military by Caleb Reynolds (sorry to disappoint, he was but a simple groundskeeper/future Bold & the Beautiful star), but as it turns out, Beast Mode Cowboy Caleb himself is very familiar with the military. During Sunday night's episode, the 26-year-old opened up to his fellow housemates about his time in the army. The current HoH — who reportedly served as a prison guard for a year in Iraq — showed "things that have been through combat" in his room, including a hat, a flag that was in Baghdad, and a blue infantry cord, the latter of which had sentimental value to Caleb.

While Caleb's Big Brother bio reads that his military service is his proudest accomplishment, he's kept surprisingly mum about it during the season. (Earlier in the summer, Caleb said that he didn't want to share the details of his military service, because he feared it would make him a target in the house.) However the first half of the episode hinted at Caleb's soldier mentality, as he told himself during that painful HoH competition that he was doing it for his fallen brothers.

But, as it turns out, his housemates didn't see his background as a threat, rather something that earned their respect. While Caleb shared his military stories in the HoH room, Christine marveled, "[He] fought for me...fought for my life." (Still, Christine's admiration for Caleb couldn't keep her off the block.)

While Caleb has rubbed many viewers the wrong way throughout this season, Sunday night's episode — and his willingness to open up about his service — may have put him in a new light.