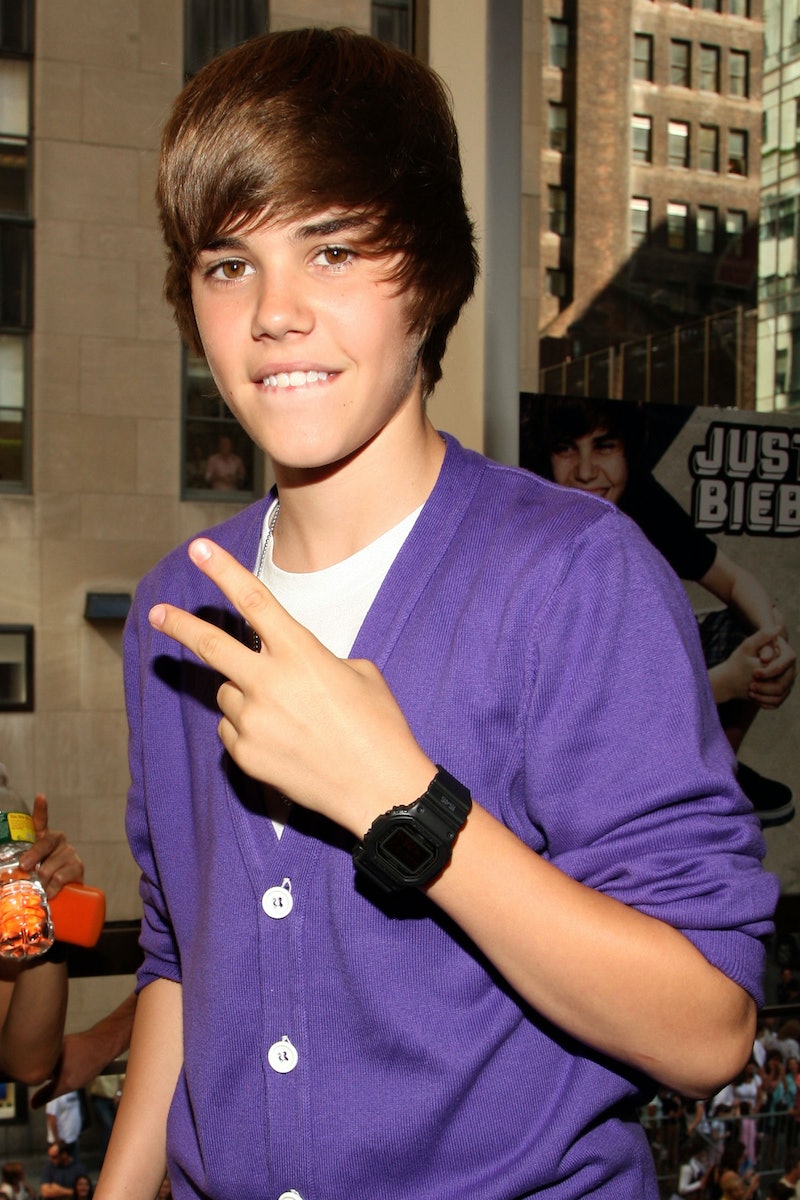 The year is 2009. Justin Bieber has released his first single, "One Time", in the summer and followed that up with a debut album called My World in the fall. People are torn between admitting his songs are catchy and he's adorable, joking that he "looks like a lesbian" and is really annoying, or some kind of middle ground where they can hear "One Less Lonely Girl" maybe once or twice before shutting off the radio. That was then and this is now. Now, we have a Bieber that makes rude comments about Miranda Kerr to incite her ex-husband Orlando Bloom to violence. We have a Bieber whose neighbors are this close to making a citizen's arrest to stop his constant partying. We have a Bieber that was arrested for assault in Canada on Friday. We have a Bieber that we need to accept as the one and only Bieber, because 2009 Bieber is never coming back.

Sure, a lot of this can be attributed to simply growing up. Bieber was only 15 years old when his first album dropped and now he's 20 years old. We can't expect someone to be the same person at 20 that they were at 15. Besides, every teenager goes through a rebellious phase and Bieber just has the misfortune of having his rebellious phase under constant media scrutiny. Yeah, no, those kinds of "boys will be boys" excuses only carry you so far. There's a difference between rebranding yourself as "bad" — like Rihanna successfully did between her A Girl Like Me and Good Girl Gone Bad albums — and the kind of legal trouble and social faux pas that Bieber constantly finds himself in the center of.

It's been five years since "One Time" came out and since then we've seen two very different sides of Bieber. Which one is superior? Well, that's really no contest. The old Justin Bieber had the more superior and likable personality by far, probably because back then we hadn't yet found out about the racist jokes Bieber made in private that were later leaked in video form.

When Miley Cyrus shocked the world by twerking on Robin Thicke at the 2013 VMAs, she made an entire new career out of being outrageous and "bad" and shocking. However, Cyrus has since calmed down, doing things less for the shock value and more because she's just having fun, and people have come to accept that, well, she's not hurting anyone. Bieber, on the other hand, is hurting a lot of people. He's hurting Selena Gomez, who is frequently drawn into his legal troubles just by being present. He's hurting his fans, who are constantly forced to defend him from the backlash of his latest move. He's hurting himself, by leaving his reputation in tatters.

Many times when Bustle is writing about Bieber, most of us are hoping that he will redeem himself or that he's taking steps to rehabilitate his image. We're hoping that this phrase is coming to an end. But what if it's not a phase? We should probably start preparing ourselves for the idea that this is who Bieber is now and forever more. As exasperating at it is every time another news story crops up about Bieber's latest horrible stunt, that exasperation is born from the hope that the last stunt was the last stunt. It's born from the knowledge that Bieber was "good" for three years and has only been "bad" for two, so it's not too late to revert.

Unfortunately, I think there's nothing to revert back to anymore. For better — Okay, definitely for worse, this Bieber is the Bieber we should all be used to by now, the Bieber that he has grown into and the Bieber that is here to stay. Say goodbye to the Old Bieber, you guys. I hope I'm not the only one feeling silly now for criticizing him back then.