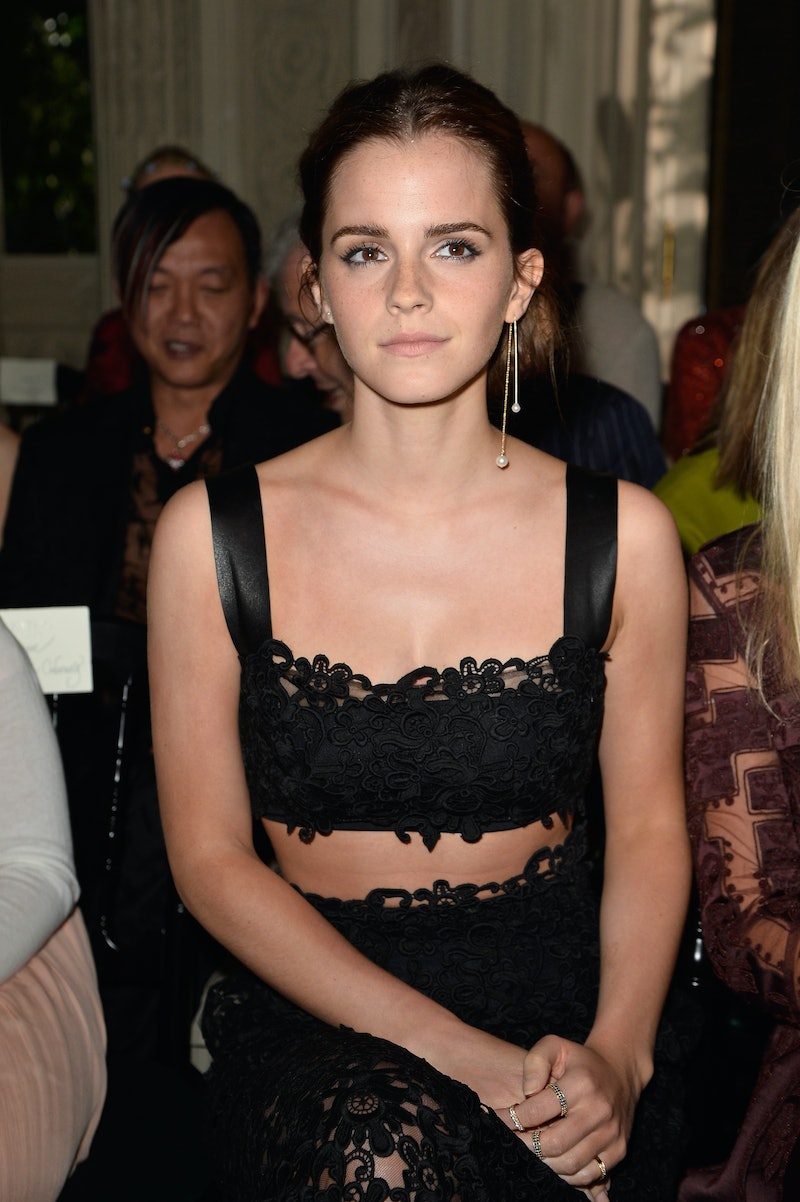 The disgusting nude photo leak that has sadly put famous faces like actress Jennifer Lawrence, singers Ariana Grande and Rihanna, and model Kate Upton through the wringer since their release on August 31, has people from all over the place coming out of the woodwork to put in their two cents. While for many the nude photo scandal is a cut-and-dry example of right and wrong (people who don't look at the photos: right; people who do look at the photos: wrong), certain celebrity opinions have surprisingly run the gamut from who's truly to blame for this mess: the actresses who took the pictures in the first place, or the sad excuse for a human being who hacked them.

It might seem crazy to think that anyone could sympathize with the 4chan hacker who supposedly obtained the nude pictures by illegally gaining access to a mile-long list of actresses' cell phones and personal computers, but a tweet from The Office actor and comedian Ricky Gervais had everyone scratching their heads on Monday night. The tweet, which has since been deleted, came under fire when it appeared as though Gervais was blaming the celebrities involved in the nude photo leak for taking the racy pictures to begin with.

After receiving a quick (and well deserved) backlash, Gervais deleted the tweet and tried to explain.

If anyone was looking for the world's worst way to react to such a massive violation of privacy, Gervais takes the cake. Thankfully, a collection of other celebrities wholeheartedly supported the victims of the scandal, and came out swinging via social media to shut down anyone who finds the situation remotely funny. Lena Dunham, no stranger to being naked in public herself, tweeted out a lengthy, and eloquent, response.

Anna Kendrick posted a screenshot to Instagram along with the caption, "Don't worry bro, it would just be photos of food and other people's dogs anyway. #SeriouslyThoIHopeThatGuyGoesToJail #Wheeeee"

Emma Watson also took to Twitter to voice her opinion.

Seth Rogen got a little heat for his supportive tweet when followers misconstrued his sentiment for comparing women to merchandise, but his explanation proves he's still just as lovable as we all thought.

Finally, Dexter actress Yvonne Strahovski, one of the victims in the leak, posted a heartfelt message to her Instagram account which addresses the hacking incident:

While the repercussions of this scandal are far from over, hopefully any celebrity opinion that makes its way out into the social media stratosphere from now on will be more Team Dunham-Kendrick-Watson-Rogen-Strahovski than Team Gervais. Innocent intention or not, this is a very upsetting ordeal for everyone involved, and there's absolutely nothing funny about it.

More like this
UK Viewers Will Have To Wait To Watch The Handmaid’s Tale S5
By Maxine Harrison
After The Bling Ring, Nick Prugo Was Embroiled In Another Scandal
By Arya Roshanian
Megan Rapinoe's Relaxation Hack Is Super Dreamy
By Carolyn Steber
Confusion Reigns After Kanye Changes His Instagram Profile Pic To Kris Jenner
By Jake Viswanath
Get Even More From Bustle — Sign Up For The Newsletter