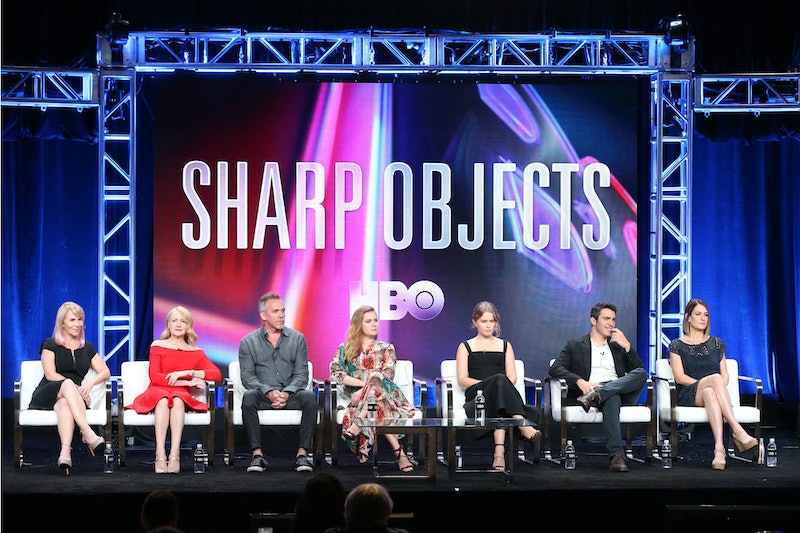 Bestselling author Gillian Flynn is well on her way to becoming her very own cottage industry (can Flynn-branded marionettes be far off? I certainly hope not), but before the author's uniquely twisted and thrilling novels explode off the page and into culture at large, she's got some adaptations to get cracking on. A pair of Flynn's previous novels — Dark Places and Gone Girl — are bound for the big screen this fall, but her Sharp Objects is going in a different direction: to television.

Earlier this summer, Entertainment One announced plans to bring Sharp Objects to television. The new show has already got some excellent talent attached, with Marti Noxon (Buffy the Vampire Slayer) on board to serve as the series' showrunner and primary writer, with Flynn herself set to produce the project.

Like Dark Places and Gone Girl, the Sharp Objects adaptation was originally conceived of as a movie, but although its narrative structure may make for a compelling single novel (and, boy, does it ever), blowing it out into a full-scale television series is stroke of genius. Still, how exactly can the Sharp Objects team go about turning a self-contained storyline into a continuing series? I've got some ideas:

1. Focus on Camille's time as a young journalist in Chicago

Flynn's novel centers on Camille Preaker, a small-time reporter at a crumbling Chicago newspaper who finds herself pulled into the case of a lifetime: the murder of a young girl and the disappearance of another, a heinous crime that just so happens to have unfurled in her very own hometown. Sure, Wind Gap, Missouri has its own secrets to reveal — including plenty of shocking stuff about the childhood murder of Camille's own sister Marian — but what about Camille's life before she goes home? What did she write about before plunging headlong into the wicked world of Wind Gap? Of course, we have to go to Missouri eventually, but diving deep into Camille's pre-novel adventures could provide a solid background that could span any number of episodes.

2. Go back in time to cover Camille's messed up childhood

During the course of Sharp Objects, we learn plenty of details about Camille's life in Wind Gap as a child and a teen, and it is rough and weird stuff (the kind that will make your toes curl and you hair stand on end). So much of Sharp Objects is about the seriously damaged Preaker clan (especially Camille's deranged mother), and the things that unfold during Camille's formative years in her mother's house play a major part in what she experiences as an adult. With so much rich backstory, why not go back in time and plunge into how it all started?

Although all of Flynn's novels have a distinct and very recognizable flavor and tone (dark, twisted, and with some big-time gothic undertones), the author is aces at mixing up how she wraps up her unsettling tales. Of her three novels, Sharp Objects is the only Flynn original that has what one would classify an "open ending" (Gone Girl definitely doesn't end in a tidy little bow, but it's not exactly a book that doesn't answer its biggest questions). The book's conclusion is crammed with sudden surprises and rapid revelations, and lifting off from their may be both the most logical and the most obvious departure point for a television series.

The majority of Flynn's text takes place in Wind Gap, with both the beginning and the ending spending precious little time in Chicago, which seems normal and tame and very safe compared to the horrors that await in Missouri (no small feat). Nothing is as it seems in Wind Gap, and even though Camille has long since relocated to the big city by the time we first meet her, her roots are still there — and she's still most herself (for better or very, very worse) when she's in her hometown. What other secrets does Wind Gap hold? I'm betting quite a few, with a hefty dash of them resting on the Preaker family.

5. Make it all about Amma

Camille's wicked little sister lights the page on fire as soon as she appears, and her nasty hold on both the reader and the characters within the novel never lets up. Camille may be damaged and strange, but Amma is a straight up villain. She also just so happens to be 13 years old. While Sharp Objects doesn't really mince words when it comes to the depth of Amma's evil, there still seems to be plenty of that left to explore. What was Amma really like in school? What happens after the novel ends? Where is Amma going to be five, 10, 20 years down the road? I tremble to imagine it.

6. Expand out the action of Sharp Objects for a full season

Sharp Objects is bursting with detail, backstory, and rich characters. Despite ringing in at a slim 254 pages, Flynn uses her novel to create a finely wrought and very memorable experience. But can it be blown out to encompass a full season of television? Easily. If Noxon and Flynn are willing to take some detours and spend some more time with subplots and peripheral characters (like Camille's love interest Richard), there is absolutely a complete season of some damn good television here. If Sharp Objects takes the Fargo or True Detective route, providing its viewers with eight to ten solid hours of entertainment, I'm betting the series can do whatever it wants for its sophomore year.