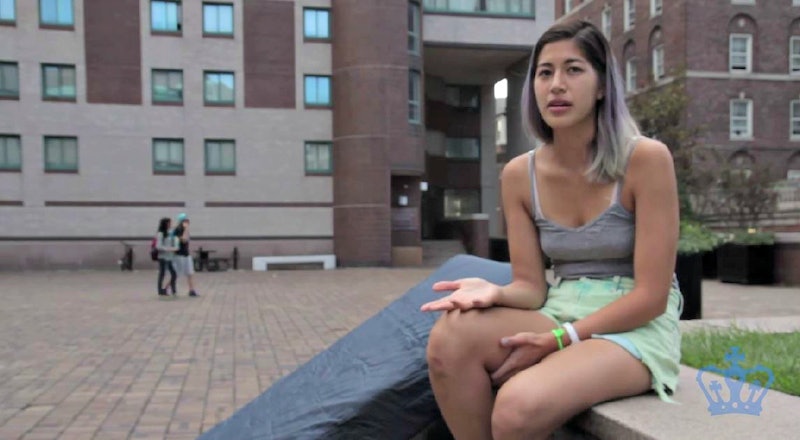 Emma Sulkowicz, a senior in the class of 2015 at Columbia University’s undergraduate school, Columbia College, has been one of the most vocal of those speaking out against campus rape in recent months — and for her visual arts thesis, she’ll be tackling the issue head-on: Called “Mattress Performance/Carry That Weight,” the performance art piece will see her carrying a dorm bed mattress around with her wherever she goes. She’ll carry it for as long as she attends the same school as her rapist, which, as she told the Columbia Spectator, “could potentially take a day… or it could go on until I graduate.”

Sulkowicz filed a police report in May against the man who raped her; she’s also one of the 23 students who filed a federal complaint against Columbia alleging the violations of Title IX, Title II, and the Clery Act. The disciplinary hearing held by the university last year left the perpetrator unpunished, and the police treated her dismissively, openly doubting her and belittling her. So what do you do when no one will listen to you? You find new ways to speak.

That’s what “Mattress Performance/Carry That Weight” intends to do: Present the message in a way that can’t be ignored. The mattress is symbolic for more reasons than just the obvious one floating on the surface; Sulkowicz’s rapist assaulted her in her dorm room bed — but, as she said to the Columbia Spectator, a dorm mattress is light enough for her to be able to carry around while still going about her day, but weighty enough that she’ll have to constantly struggle with it. She isn’t allowing herself to ask anyone for help, but if anyone offers to help of their own volition, she can accept.

I don’t think I have to tell you what that’s like.

Additionally, it also mirrors how Sulkowicz has been talking to the media about the assault and its aftermath over the past year: She’s taken something from an intimate space in her life and brought it out into the light. Sukowicz will also be spending time in her studio in Watson Hall, covering the walls with the rules of engagement, for anyone who wants to know more.

Sulkowicz’s performance art piece is timely, as well as poignant: Last week, California passed the “yes means yes” sexual assault bill, which states that unwanted sexual activity is no longer defined by saying no — a “yes” must be present for something to qualify as consensual. This bill is a landmark for obvious reasons, and the hope is that it will change the culture of campus rape and sexual assault. I hope the rest of the country is paying attention, because bills like this need to be mandated at a federal level.