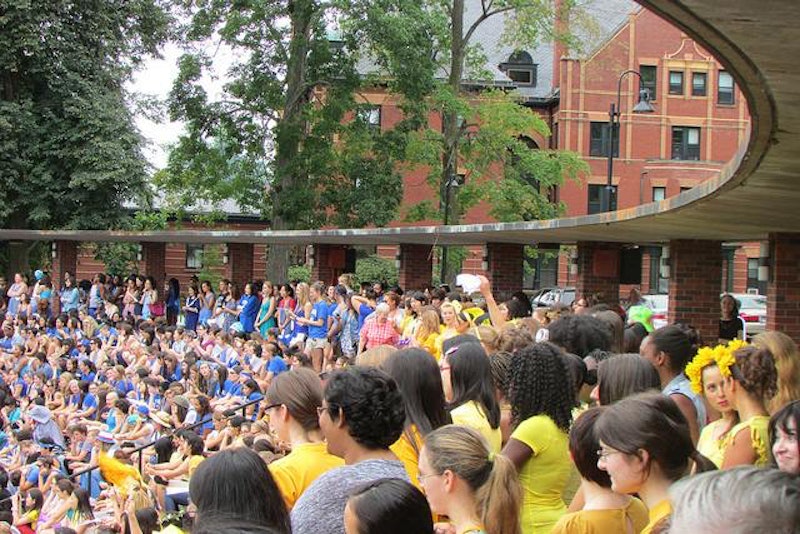 As colleges around the country begin their fall semesters, Mount Holyoke College's new policy towards transgender students has the school year off to a great start. On Tuesday, the Massachusetts college's President Lynn Pasquerella announced a drastic change to admissions and enrollment policies, newly welcoming transgender and female-identified students to a campus historically inclusive of only cisgender women. This sets a powerful precedent for the remaining 118 single-sex colleges in the United States.

Pasquerella discussed the official policy during convocation earlier this week, stating that the college is still committed fully to the growth and development of women, and this new, more inclusive policy will only enhance that mission. The crux of the issue of trans-inclusion for single-sex institutions has historically been about the body; to put it simply, if you were assigned female at birth then you are eligible for admission at a women's college. A powerful statement on the college website dismantles this mindset and sets up a brand new framework for what it means to be a woman:

"Traditional binaries around who counts as a man or woman are being challenged by those whose gender identity does not conform to their biology. Those bringing forth these challenges recognize that such categorization is not independent of political and social ideologies. Just as early feminists argued that the reduction of women to their biological functions was a foundation for women’s oppression, we must acknowledge that gender identity is not reducible to the body."

Right on, Holyoke. Though it's completely valid and important for single-sex institutions to be dedicated to the growth and advancement of students in a non-coed environment, it is not OK for them to decide who what it is about a person that makes them male or female. That is solely up to the applicant and women's colleges that don't yet have a welcoming policy for transgender or female-identified students, like Wellesley College and Smith College, are wrongly taking that power in their hands and are actually stunting the growth and education of women around the world, not enhancing it.

Mount Holyoke is the second single-sex institution in the country to implement this policy, the first being Mills College, where the policies were just edited within this last week. Hopefully this sets off a wave of changes and more single-sex institutions to commit to a more inclusive education for everyone.