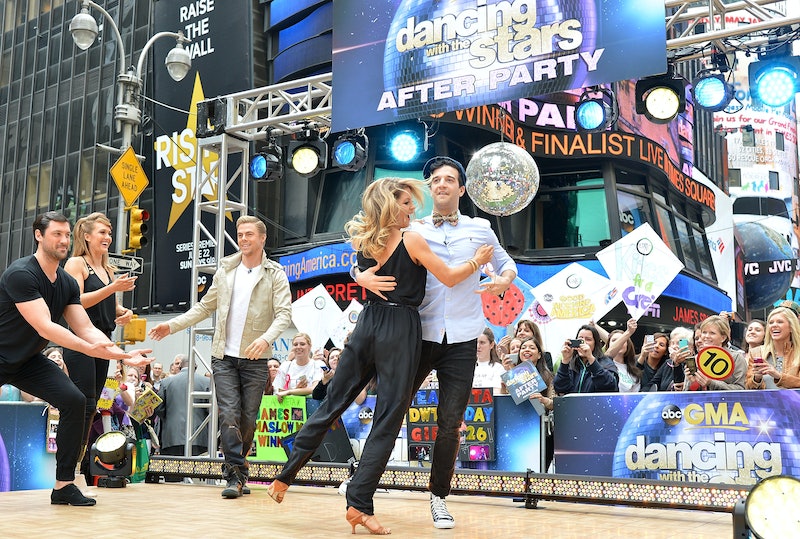 The wait is finally over. After an amazing season in which Dancing with the Stars gave everyone the amazing duo of Maksim Chmerkovskiy and Meryl Davis, beloved favorites with sizzling chemistry on and off the screen, they have announced the next batch of celebrity dancers for DTWS season 19. The news dropped on Good Morning America Thursday morning and the line-up couldn't be more epic. The dancers and their pro partners for season 19 are Alfonso Ribeiro and Witney Carson, Sadie Robertson and Mark Ballas, Michael Waltrip and Emma Slater, Lolo Jones and Keo Motsepe, Jonathan Bennett and Allison Holker, Lea Thompson and Artem Chigvintsev, Antonio Sabato Jr. and Cheryl Burke, Randy Couture and Karina Smirnoff, Janel Parrish and Val Chmerkovskiy, Tommy Chong and Peta Murgatroyd, Betsey Johnson and Tony Dovolani, Bethany Mota and Derek Hough, and Tavis Smiley and Sharna Burgess.

We've had some hints as to the line-up in the days leading up to the announcement. US Weekly reported on Wednesday that Jonathan Bennett and Alfonso Ribeiro would be on DWTS, better known as Mean Girls' Aaron Samuels and The Fresh Prince of Bel-Air's Carlton Banks. There were also rumors that Janel Parrish of Pretty Little Liars' fame would be joining the season 19 cast as well, since she has a lot of free time now that her character Mona Vanderwaal has been killed off. Essentially, we had a good picture of the most famous names in the line up and it turned out to be completely accurate.

Of course, no one who has ever seen an episode of The Fresh Prince of Bel-Air would be in doubt of Ribeiro's dance skills. He's downright famous at this point for The Carlton Dance set to Tom Jones' "It's Not Unusual", and he's replicated it off the show as well. He's even done it alongside Will Smith, the original Fresh Prince, and son Jaden Smith. Am I the only one with a burning desire to see him do it, or allude to it, at some point during this season of the show?

Meanwhile, Bennett aka Aaron Samuels proudly declared that he's been obsessed with Dancing with the Stars since he saw the first episode. "And now that I'm on the show, everything hurts. So it's like maybe I was regretting my choices..." he joked. "But no, it's so much fun. I love it." Unfortunately, we won't get to decide for ourselves if his hair looks sexy pushed back because Bennett has been rocking a much shorter cut since his Mean Girls days.

The premiere of Dancing with the Stars season 19 is set for Monday, September 15. We might not find another Maks and Meryl unless Parrish and Chmerkovskiy are able to repeat his brother's success, but we're definitely going to have fun with this batch of new talent. Not to mention all the nostalgia feels we'll have from seeing Carlton Banks and Aaron Samuels on the same show at the same time.