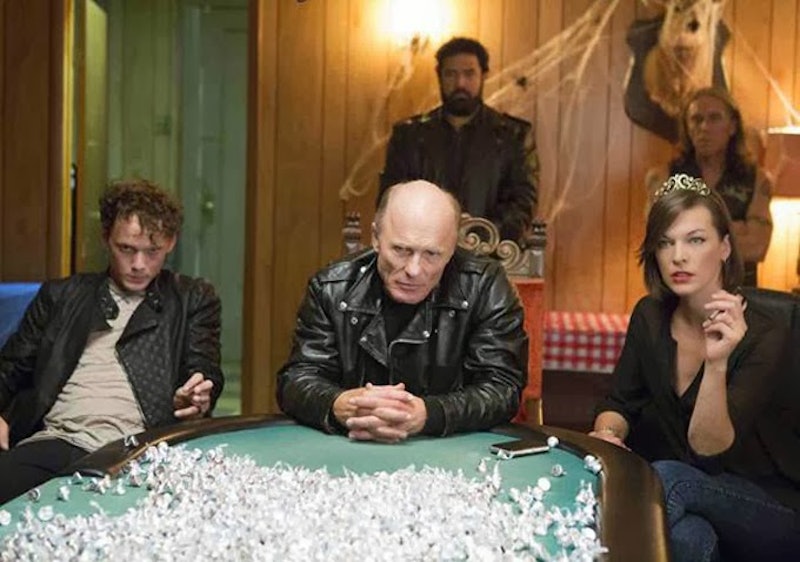 If you've been worried about how Penn Badgley's acting career is faring since the end of Gossip Girl, good news: He's in a movie again! Yes, Badgley has stayed in the headlines what with his musical aspirations (OK, all kidding aside, his band, Mother, is actually pretty great) and his dating life (his girlfriend is Jemima Kirke's sister Domino! Now he's a real hipster!), but as far as acting went, it's been all quiet on the Hollywood front for this guy. That always seemed a bit strange to me, really, considering how badly he wanted out of Gossip Girl towards the end of the series, so he could go focus on his serious movie career. But now, it seems, the hiatus is over, and Badgley is back with the release of the first trailer for his Shakespeare-inspired film Cymbeline hitting the web. The even better news this brings about is that the trailer doesn't look like it sucks either — in fact, it's actually kind of interesting.

Like Baz Luhrmann's Romeo + Juliet before it, Cymbeline takes a play by the great William Shakespeare of the same name, and twists it into a modern setting with the same Shakespearean dialogue as the play.

This time, Cymbeline takes place in modern-day, involving biker gangs and gangsters. Dan Humphrey — I mean, Badgley — shoots guns, and Ethan Hawke, Milla Jovovich, Anton Yelchin, and Dakota Johnson are all there too. We all know now that Dan Humphrey lived a secret life as Gossip Girl, but who knew he was also a gangster too? I guess you never really know someone.

Check the trailer below. Cymbeline doesn't have specific a release date yet, but expect one soon: The film just premiered at the Venice Film Festival.

More like this
Shakira Joked About An Early 2000s Video Of Her First Camera Phone Encounter
By Stephanie Topacio Long
Coldplay Surprised Fans At Wembley Stadium With This Special Guest
By Frances Stewart
Revisit 1992’s 'A League Of Their Own Cast' Photos After The New TV Series
By Grace Wehniainen
At 28, Lesley Manville Was Acting, Picketing, & Singing Kate Bush Songs
By Olivia-Anne Cleary
Get Even More From Bustle — Sign Up For The Newsletter